How can we continue to tell other nations what to do when our own democracy is suffering from mediocrity and decay? 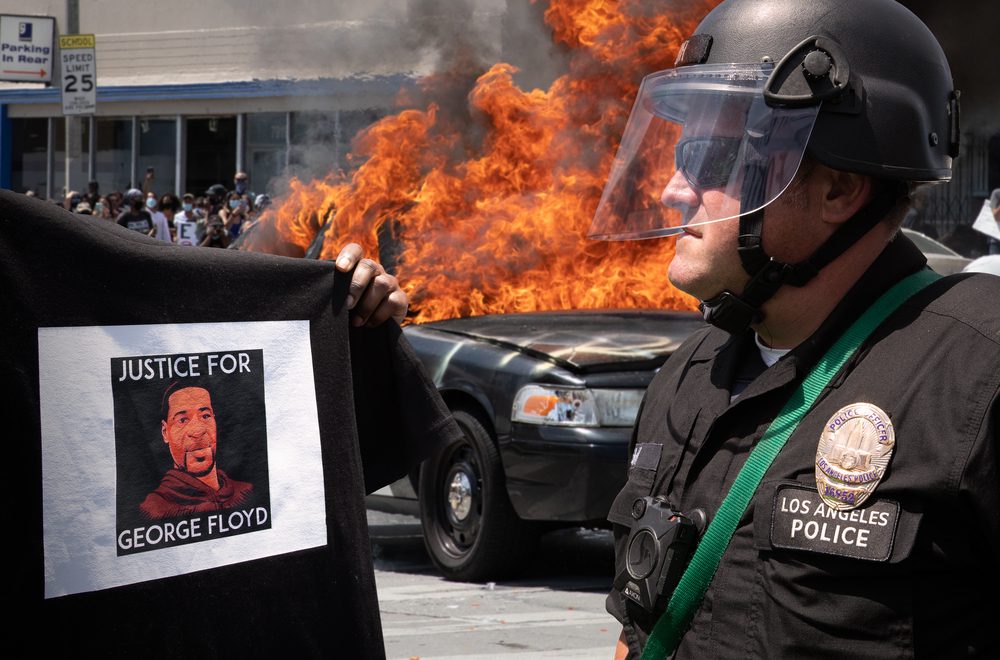 As the United States cascades toward the status of a failed state, an author at The National Interest points out that, “democracy for Iran is one cause that effortlessly unites the left and right in unprecedented ways.” House Resolution 374, which calls on Iran to adopt a “secular democracy,” secured 221 House co-sponsors of both parties and was enthusiastically embraced by the Trump State Department.

Disorder and violence is rampantly spreading in the U.S. The history and traditions bequeathed by our ancestors are being defaced, freedom of speech and religion are increasingly under siege, and rank partisanship and vitriol mark our politics. In response, our nation’s leaders have come together to exclaim to the world: “you need to be more like us.”

You might have thought that when the nation has descended into chaos and whole sections of major cities have become ungovernable, it would be time for a little humility. Not for our puffed up political class. They continue to hector other nations with claims of American superiority at a time when American democracy is displaying clear signs of mediocrity and decay.

As democracy promotion continues to be the animating principle of American foreign policy for both parties, consider the condition of American democracy.

First, the Democratic Party, once a great bastion of John Stuart Mill-style liberals, was at one time populated with politicians who earnestly felt that social problems could be solved by people with brains, sympathy and good will. These liberals—Patrick Moynihan is an example—were rational, inquisitive, insightful and sincere. They were generally formidable interlocutors when discussing the nation’s problems, which they genuinely wished to solve. These traditional liberals were not “conservative” in the sense that they were more respectful of “reason” than of tradition, and they were certainly elitist, but they were civilized, orderly and thoughtful.

Now consider the temperament of those setting the tone in the contemporary Democratic Party. John Stuart Mill-style liberalism is dead, its rationality replaced by a totalitarian ferocity that brooks no dissent and labels opponents as malevolent cretins. A Frankenstein’s monster, who was created on our university campuses and who there instituted a decades-long reign of terror, has now extended his dominion over institutions off-campus, such as the Democratic Party and the media. Like Mary Shelley’s monster in her novel, the Western intellectuals who created the illiberal campus culture insisted that the creature was beautiful when, in fact, he was hideous and violent. And, as in the novel, when the monster—who felt that he was full of virtue and innocence, simply a victim of a cruel world–escaped into the population no one was safe.

It took several decades for the irrationality, ideology and intolerance of campus culture to overtake the Democratic Party, but that takeover is now complete. Politicians on the left no longer wish to debate the nation’s problems and, as is the case for activists on campus, their goal is to shout down, stigmatize, smear, and crush their opponents. In this tribalistic culture, there are no longer any civil rights for the accused in non-favored groups. Accused police officers in urban areas controlled by Democrats will now face the same kangaroo justice that boys on campus faced when they were accused of sexual misconduct. Campus culture is now Democratic Party culture, and its victims will be innocent citizens trapped in urban areas that will go unpoliced and ungovernable for the foreseeable future.

If you think the GOP is the antidote to this chaos, think again. The Republican Party is sometimes labeled as the nation’s “conservative” party. What exactly has the GOP sought to conserve? As the intolerant left marched through all of the nation’s cultural institutions, Republicans did nothing. They had some electoral success, but they accomplished little because they did not understand that public policy is downstream from culture; the options of the policymakers are quite limited when the culture sets the boundaries of acceptable debate.

Conservative “intellectuals,” should have been seriously alarmed by the Maoist-style cultural revolution, instead they abandoned the universities and founded “think tanks” designed to push tax cuts at home and endless wars abroad. How, one might ask The Heritage Foundation, are things going on the American heritage front?

The conservative “movement” ignored the culture and became obsessed with electoral politics and economic growth, meaning that the ultimate goals for “conservatives” became power and money. The philistinism of the Republican Party was captured brilliantly in Sen. Marco Rubio’s declaration during the 2016 campaign that college students should avoid learning Greek philosophy. Rubio’s consistent position has been that compared with money and war, Aristotle is not worth your time. Rush Limbaugh has voiced the same disdain for our foundational classical culture. Is it any wonder that Republican politicians are at a loss and hiding under their beds as disorder sweeps the nation? They simply do not know what to say or do because they have ignored, and sometimes even ridiculed, the traditions that gave us Western order and American constitutionalism.

Populism and nationalism, two trendy buzzwords of conservative intellectuals, simply represent the pouring of old wine into new bottles and reflect the continuing misguided emphasis upon electoral politics. These buzzwords are likely to pass away if Trump is defeated in the election. With Jared Kushner firmly at the helm in the Trump White House, Trump will likely fail to make good on two of his signature campaign promises: immigration reform and exiting the Middle East, thus cinching defeat in key Midwest battleground states. Rather than adopting a 2020 campaign slogan of “Keep America Great,” Trump might consider, “après moi le déluge.”

Thirty years ago, as the Cold War was coming to an end, Jeane Kirkpatrick warned us that, “a good society is defined not by its foreign policy but its internal qualities.” She advised Americans to come home from their global commitments and to work to “make a good society better.” Our leaders of both parties ignored her advice, and we are seeing the results.

William S. Smith is Senior Research Fellow and Managing Director of the Center for the Study of Statesmanship at The Catholic University of America. His recent book Democracy and Imperialism is from the University of Michigan Press.