A Suburban Mall Dies in a New Deal Paradise 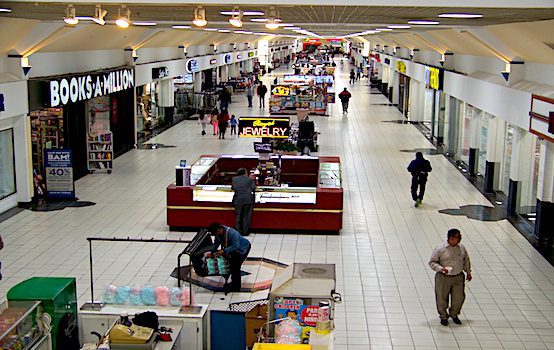 Greenbelt, Maryland, an early suburb of Washington, D.C. in Prince George’s County, has a more storied history than its appearance would suggest. It was established in 1937 as a planned community under the Roosevelt administration, as one of three “Greenbelt Towns.” The overarching New Deal project never quite panned out, but Greenbelt itself was a success. The original planned community is now surrounded by typical commercial and residential sprawl, but “Old Greenbelt” is still there, sporting a vintage movie theater, a community center, and even a coffee shop called New Deal Cafe. In that surrounding sprawl is Beltway Plaza, an exquisitely well-preserved early 1970s indoor mall. Beltway Plaza is vibrant, thriving, and, if a new development plan reaches completion, about to be torn down.

The mall opened in 1963 as a strip shopping center; the indoor portion was added in 1972 and expanded in 1975, and the building has been renovated and rejiggered many times over the years, though with few updates to its atmosphere. A little piece of trivia: it originally housed the largest suburban department store in the D.C. area.

Though built concurrently with thousands of similar shopping centers, today Beltway Plaza is a rare time capsule of postwar suburbia: the kind of mid-sized, middlebrow indoor mall that barely exists anymore, and has not been newly constructed in decades. Most retail today is housed in strip plazas, larger and more upscale malls like the ones in Tysons Corner, Virginia, or, increasingly, New Urbanist-inspired “town centers” like those in Reston, Virginia and Rockville, Maryland.

The mall’s appearance and decor is even more of a time capsule than its layout. Remarkably, the stores are largely non-chain small businesses, some with completely generic names such as a small hardware shop called…“Hardware.” Instead of Victoria’s Secret, there’s Luv’n Time, complete with mannequins in kitschy plastic alcoves decked out in retro lingerie. Instead of Men’s Wearhouse or Jos. A Bank, there’s Ties Shirts & More. There are carnival-style ice cream kiosks, electro-mechanical rides, and lots and lots of neon. A place like this will never be built again.

This might sound like a “dying mall,” but it is vibrant and alive, with only a handful of vacancies out of approximately 100 spaces. A retro mall bustling with locally owned small businesses sounds like a community fixture, if not a tourist attraction.

Yet its days are numbered, as a redevelopment plan (the latest of several) has recently moved forward. The building is aging, and having been renovated and altered piecemeal over the years, a full overhaul wouldn’t have been cheap or easy, nor would it make full use of the real estate value of the lot. The mall is also just a stone’s throw away from a large, recently built development called Greenbelt Station, which looks like this.

These are large, spacious, brand new townhomes, and while some merely house wealthier University of Maryland students rather than homeowners or families, most people living in them will not be buying lingerie at Luv’n Time or knick-knacks at Gift Outlet.

Greenbelt is already one of the more desirable towns inside the Beltway, enjoying lower crime than many others, and very little urban blight. It isn’t exactly gentrifying, but it’s not likely to become cheaper.

The current redevelopment plan, like many similar projects around the D.C. metro area, aims to turn the single-story suburban mall into a mixed use project with housing, office space, and retail. A report from the Urban Land Institute went further, envisioning a transformation of Greenbelt Road—the highway on which Beltway Plaza sits—from a suburban strip to a walkable street. “Greenbelt Road must decide…are you bringing people through you, or to you?”

One can imagine keeping the mall and transforming the Greenbelt Road corridor, by turning it into a tourist attraction in its own right. New floor tiles and a new coat of paint would brighten the place up considerably. An old neon sign on the nearby Route 1 corridor was just refurbished, and neon is cool again. A lightly refurbished Beltway Plaza would be a lot like a more affordable version of the slick, faux-authentic food halls going up in old warehouses, or the weirdly manicured, movie-set “town centers.” There’s something conservative, in the truest sense, about making do with and appreciating what already exists. Surely a piece of retro architecture built only 26 years after its surrounding municipality was established is a community landmark. It’s even got a community wall of fame.

On the other hand, whatever replaces Beltway Plaza will be much nicer, and it will also include a lot of housing. With gentrification pushing former D.C. residents into Prince George’s County, that’s a good thing, even if it means losing a neat old building.

This raises an issue, however, that often goes under the radar: what we might call “commercial gentrification.” Much early suburban retail is now downmarket, worn out, or even derelict. D.C.-adjacent Maryland and even Fairfax County, Virginia are littered with aging strip plazas, full of little hole-in-the-wall places advertising pupusas and Indian groceries on faded signs. But as aesthetically unpleasant as these places can be, they are also a resource. Economist Tyler Cowen has found that some of the best restaurants are junky looking strip mall joints. The Eden Center plaza, in Falls Church, Virginia, went from old strip mall to major Vietnamese-American cultural and culinary center—and tourist attraction.

Some assume the immigrants somehow caused these places to become shabby; the reality is that shabby buildings provide poor immigrants a chance to start a business and make their own living. Urbanist Matt Robare notes in a piece about small local business, “As neighborhoods get more popular and local retailers are successful, the rents start going up until only the chains can afford them.” In an ongoing redevelopment debate in my hometown of Flemington, New Jersey, the answer to existing businesses is essentially to move or pay astronomical new rents. In a few cases of strip mall redevelopment, existing retail tenants are grandfathered into new developments or promised below-market rates. Mostly, they move or close.

Greenbelt, Maryland isn’t exactly Georgetown, and whatever stores are built one day on the Beltway Plaza site probably won’t be Coach, Apple, and Papyrus. But they probably won’t be Hardware or Luv’n Time either. Losing those stores, those business owners, and those cheap retail spaces is a kind of gentrification and displacement, too, and it deserves to be part of the calculation. And so does all of that neon.