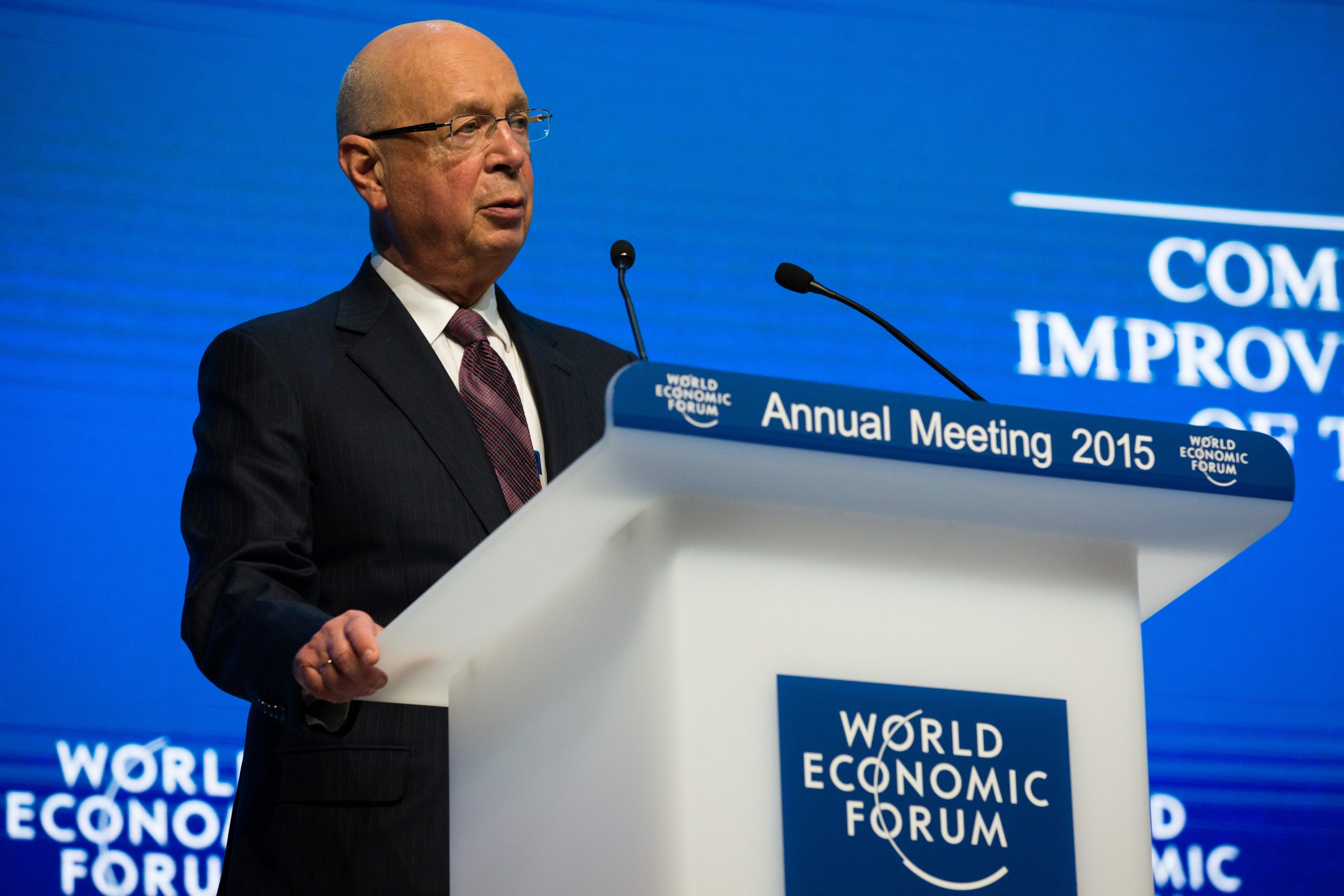 Satan took Christ to an exceedingly high mountain to show him all the kingdoms of the world and their glory. The Gospels do not name the mountain, but given the Adversary’s flair for the dramatic, one rather doubts he favored the dusty hillocks of Palestine. Of all the astonishing peaks that may have tempted the Tempter, to choose any but the Jakobshorn would have been an unforgivable failure of the poetic imagination. At 8,500 feet, the Jakobshorn is far from the tallest peak in the Rhaetian Alps, but what it lacks in vertical grandeur it more than compensates for with a north-facing view of the most Satanic town on Earth: Davos, Switzerland.

Every year the world’s wealthiest oligarchs and most influential political leaders meet in the resort town at the World Economic Forum to schmooze and strategize about the future. Davos has become a condensed symbol for the sort of world-bestriding power with which Satan must have tempted Christ; but whereas Christ refused to inaugurate his otherworldly kingdom through worldly means, the “Davos crowd”—long afflicted with messianic delusions—is eager to deploy coercion to inaugurate their own. Their agenda has been euphemistically named “The Great Reset,” and it envisions what many of its proponents openly refer to as a “new world order.”

Klaus Schwab, founder and executive chairman of the WEF, began publicizing the Great Reset agenda in 2014, but the COVID-19 pandemic has provided the conditions necessary for implementing it. Schwab argues that in order to resolve the crises afflicting humanity—climate change, skyrocketing inequality, deep public debt, the worst global economic depression since the 1930s, and, of course, the pandemic—“the world must act jointly and swiftly to revamp all aspects of our societies and economies, from education to social contracts and working conditions.” Even after the most recent (digital) meeting of the WEF in January the details of this revamping remain strategically vague, especially as reported by sympathetic legacy media. But a survey of the more prominent proposals, including Schwab’s own, reveals a plot at once insidious, comprehensive, and banal.

Climate change, we are told, is an existential threat to humanity and the window for mitigation is fast closing. Nation states are stubborn, irascible creatures and can’t be counted on to prioritize the world’s long-term interests over their own immediate desires. Thus they must relinquish sovereignty in areas influencing the environment, outsourcing regulatory and oversight power to supranational entities run by WEF-approved elites who, naturally, understand the needs of individual nations, and the impact of those needs on the climate, much better than those nations’ own citizens. This centralization of the global economy (what one WEF contributor describes as a merging of capitalism and socialism) will be aided by a transition away from national currencies to digital currencies controlled by central banks.

The shift to digital currencies is essential to the Great Reset. As economies are themselves notoriously unwilling to submit to the ideas of economists, the people constituting individual economies must also be closely regulated, lest personal consumption habits or black-market entrepreneurship sabotage the climate-crisis war effort. Such regulation will be accomplished in part by abolishing untraceable paper money and forcing all transactions to be transparent and permanently recorded.

This is part of the Great Reset’s radical embrace of the Fourth Industrial Revolution, which, according to Schwab, “is characterized by a fusion of technologies that is blurring the lines between the physical, digital, and biological spheres.” The “internet of bodies” (IoB)—the porous networks arising from interfacing human bodies with internet-connected machines—offers a heretofore inconceivable degree of social control through manipulation of data derived from smart phones, fitness gadgets, automated insulin pumps, cochlear implants, pacemakers, and any number of now ubiquitous devices—manipulations of data which have the potential to be lethal. Schwab envisions international entities regulating the IoB so that it functions “as a complement to the best parts of human nature—creativity, empathy, stewardship,” and thus to “lift humanity into a new collective and moral consciousness based on a shared sense of destiny.”

The IoB plays an increasingly important role in the “internet of things” (IoT), the market for which is expected to exceed $2.4 trillion by 2027. Silicon Valley and its foreign analogs need not develop the IoB with nefarious intent for its totalitarian abuse to be all but guaranteed. Just as they abuse user trust and privacy with impunity today with respect to the IoT and online tracking, market exigences guarantee they will do the same with the much more profitable—because infinitely more intimate—data generated by the IoB. Vast reaches of human personhood remain uncommodified, and neoliberalism abhors a vacuum.

As the WEF’s Great Reset portal makes clear, the content of Schwab’s “moral consciousness” will align with the parochial concerns of Western advocates of Social Justice™. In the U.S., many conservatives and libertarians are already alarmed by “health passport” initiatives like the CommonPass, which they fear will lead to implementation of a Chinese-style social credit system to enforce progressive morality. In view of the WEF’s enthusiasm for how the Chinese Communist Party polices its citizens, such fears are more than justified.

The Great Reset agenda will sound quite familiar to American evangelicals with a predilection for dispensationalist eschatology. How could the biblical literalists who were once spooked by credit cards look at the WEF’s infatuation with the IoB and digital currency and not think immediately of the Second Beast of Revelation 13, which has the power to “cause those who would not worship [its image] to be killed” and forces all “to be marked on the right hand or the forehead, so that no one can buy or sell who does not have the mark”? It’s as if Klaus Schwab read every apocalyptic speculation about the Antichrist and one-world government from John Nelson Garby to Hal Lindsey, Pat Robertson, and John Hagee, and decided it wasn’t junk theology but rather a roadmap to utopia.

When our global elites plot in broad daylight to bring about the new world order, is it any wonder that Left Behind-conditioned evangelicals indulge QAnon fantasies about what those same elites get up to in the dark?

Apocalyptic anxiety occasioned by dispensationalism is far from an exclusively evangelical or even Christian phenomenon. It so permeates our culture that even secular progressives teeter between postmillennialist optimism and premillennialist despair. This quintessentially American anxiety may have quieted down after spiking in the wake of 9/11, and briefly resurfaced in speculation that our first black president was in fact the Antichrist, but it is now on the verge of exploding stronger than ever—and maybe it should.

In November of last year, former Secretary of State John Kerry—now serving as President Biden’s special envoy for climate—declared at a panel discussion hosted by the WEF that the Biden administration will support the Great Reset. “[I]t will happen,” Kerry promised. “And I think it will happen with greater speed and with greater intensity than a lot of people might imagine. In effect, the citizens of the United States have just done a Great Reset…And it was a record level of voting.”

The United States once proved a bulwark against the tentacular machinations of the Soviet Union. Victory required extending her own tentacles, however, and she has been loath to retract them ever since. Now, after a brief, orange interregnum, those tentacles are writhing, eager to fulfill an imagined mandate to submit the world to a neoliberal totalitarianism more comprehensive than anything achieved by Moscow.

It is of course possible that I’m overestimating the smoke-filled-room-deviltry of the Davos set. But even absent conscious totalitarian intent, the logic of the market itself is moving us inexorably towards dystopia, collapsing the distinction between corporate and state power, reducing people to mere things, data- (that is, cash-) producing nodes in an ever-expanding network of deindividuation and deferred sovereignty. In the end, the Great Reset may be little more than therapeutic propaganda meant to safeguard the Davos set’s investments and to reconcile the world to decisions of political economy it made decades ago. Contra the febrile literalism of the dispensationalists, the inauguration of Antichrist’s kingdom is perhaps better understood as a recurrent process, a motif echoing throughout two thousand years of the End Times, rather than as a single event. We would be wise to recognize that pattern of domination and resist it—before we find the “invisible hand” has us by the throat.

Justin Lee is associate editor of Arc Digital and teaches undergraduate writing at the University of California, Irvine. He can be followed on Twitter @justindeanlee.