A bipartisan consensus continues to develop on America’s posture toward China. 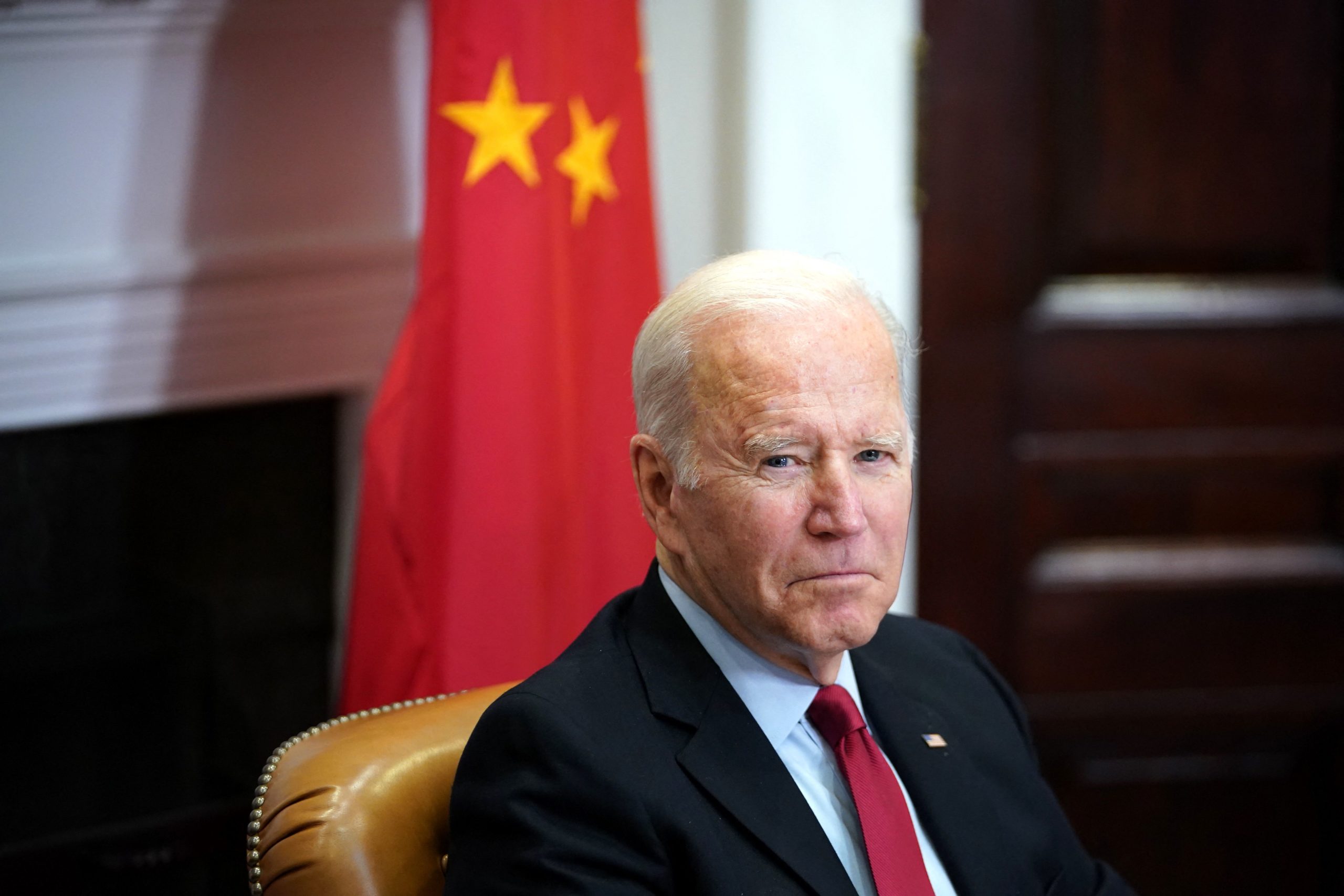 US President Joe Biden meets with China's President Xi Jinping during a virtual summit from the Roosevelt Room of the White House in Washington, DC, November 15, 2021. (Photo by MANDEL NGAN/AFP via Getty Images)
Robert York and Akhil Ramesh

In the aftermath of the Nov. 8 midterm elections, what has changed for American foreign policy, specifically the agenda of American economic statecraft? The easy answer is “not a lot." Neither the House nor the Senate has become noticeably more pro-Beijing or pro-free trade since the election results rolled in.

It remains to be seen, however, whether cooperation on an agenda for American workers will be a priority for the two parties now that they must share power.

Even if the answer is “not a lot,” what has changed? One certainly finds the most noticeable differences in the House, where the Republicans will now lead, appoint committee heads, and set the overall agenda. The Democrats have lost their long-time leader in House Speaker Nancy Pelosi, who, regardless what else one thinks of her, has been a strident critic of the People’s Republic of China long before her visit to Taiwan this summer. Now that she is stepping down from her leadership role, along with her long-time wingman Steny Hoyer of Maryland, House Democratic leadership now likely falls to Hakeem Jeffries of New York, who has a sparse record, not just on China, but foreign policy in general.

On the Republican side, Michael McCaul of Texas now looks set to lead the Foreign Relations Committee. McCaul’s recent statements have likely heartened supporters of an economic statecraft, as he has not only highlighted the PRC as a national security threat, but said he hopes to counter it by bringing more manufacturing back to American shores. McCaul is also the founder of the Congressional High Tech Caucus, which supports the domestic tech industry. McCaul will find support from, among others, Steve Chabot, who has been ranking member of the subcommittee on Asia, the Pacific, Central Asia, and Nonproliferation, and a vociferous China hawk. Given the economic nature of the rivalry, it is also noteworthy that the House Ways and Means Committee is set to be headed by Vern Buchanan of Florida, who has already had much to say about winning the “economic war” with China and bolstering manufacturing in the U.S.

And, of course, Republican leader Kevin McCarthy of California has already faced down one challenge to his leadership. Odds are he will do so again in January when the House formally votes on the next speaker, given the chaos that would ensue if he fell short. In foreign policy, McCarthy has been more focused on the Middle East than East Asia, but has long eyed the creation of a select committee on the PRC, viewing that as an area of bipartisan compromise. Those efforts were previously thwarted with the onset of the pandemic in early 2020, but he has recently promised that such a committee will be reality if his speakership bid succeeds.

In the Senate, where party control will not change, the impacts of the midterms are far more modest. Pennsylvania Republican Pat Toomey is stepping down and will be replaced by Democrat Lt. Gov. John Fetterman. It would not be fair to call Toomey a China dove, by any means, but the Club for Growth-endorsed Toomey has also been a strong supporter of free trade, having requested exceptions to tariffs on Chinese goods and earning a rebuke from the Coalition for a Prosperous America, for one.

Regarding foreign policy, Fetterman is largely a blank slate, having held only statewide and local office in Pennsylvania. His sound bites, at least so far, don’t suggest accommodation toward Beijing, however, and close relations with unions suggest a more worker-friendly stance, which could be channeled into support for reshoring efforts. Fetterman, though, will be a first-term senator with little influence, at least at first, and Democratic retention of Senate control means minimal turnover at the head of relevant committees. Foreign Relations looks to remain headed by Bob Menendez of New Jersey, one of the Senate Democrats’ most hawkish members in general, and the Senate Finance Committee that serves as counterpart to House Ways and Means looks to remain under the leadership of Ron Wyden of Oregon, who has had much to say about Chinese “digital authoritarianism” and the need to fight it.

What does all this mean? For one, the Biden administration’s only major legislative wins of 2022—the CHIPS and Science Act and the Inflation Reduction Act, both of which were designed to reshore high-tech industries—remain safe. The PRC is unpopular among elected members of both parties and their voters. However, divided government will severely curtail the Biden government’s efforts to pass major new legislation unless it enjoys broad bipartisan support.

The good news is that there remain new opportunities for diminishing PRC influence over U.S. supply chains, reshoring manufacturing, and partnering with friendly countries that enjoy comparative advantages the U.S. does not. The question is whether representatives will agree to take advantage of them.

Perhaps the clearest example of the emerging bipartisan view of the PRC challenge could be seen in the Ohio Senate race. Like other campaigns in the Midwest, Senator-elect J.D. Vance and his surprisingly stiff challenger Tim Ryan sought to outcompete each other on their hawkishness toward China, indicating that the American heartland is on board with addressing the rise of Beijing, particularly in the realm of industrial policy. In the end, the Hillbilly Elegy author’s message resonated most clearly with Ohioans, giving him a clear mandate for office as a senator who will not serve America’s lunch to the Chinese, as his predecessors may have.

The neoliberals and free marketeers that remain within the Republican Party may advocate for fiscal conservatism and trade liberalization, but they are not going to win any support in the rapidly transforming electric vehicle belt in America. Populist Republicans in the Trump administration, including the former president himself, were among the first to identify this disdain for free trade agreements. Now, it seems a few Democrats are catching on. Democrats in manufacturing and mining states are patently aware of this transformation. Newly re-elected senator from Nevada Catherine Cortez Masto’s support for mining in her state is a case in point. She joins the club of Blue Dog Democrats, alongside Joe Manchin of West Virginia, departing from the progressive squad of the Democratic Party on utopian initiatives like the Green New Deal and embracing more practical measures that bolster supply chains and foster job creation. Her policy divergence could be what the doctor ordered for a strong critical mineral supply chain.

The PRC controls several critical mineral value chains and siding with environmentalists to choke mining companies in Nevada will only aid China. In the U.S., Nevada is the leading producer of gold, silver, and barite, the second-largest producer of diatomite and lithium, and the sole producer of mined magnesite and mercury. Reviving American primacy in manufacturing and transforming the economy into an innovative one that makes semiconductors and batteries requires complementary public policy. Stifling the operations of the only active lithium mine in the country when China processes 80 percent of the critical mineral will be a foolhardy policy; fortunately for America, the mining state is represented by a Democrat who gets it.

On foreign policy and in particular the PRC, a different kind of horseshoe theory emerges. It is a coalition of Blue Dog centrist democrats and economic populists of the right. The free marketers and the progressives are the doves, even if for different reasons. The midterm results would indicate that the American electorate’s choices for leadership oscillate between center and far right, at least if China, trade, and foreign policy were on the ballot.

What will be the priorities for the new Republican majority in the House of Representatives? Specifically, do they consider the PRC a bigger threat than Joe Biden? If so, opportunities for bipartisan cooperation remain. But early signs suggest a focus on the inner workings of the incumbent administration; one might worry a focus on the missteps of Biden and his family will detract from focus on the PRC’s influence on American supply chains.

This is not to suggest that Hunter Biden’s dealings, particularly with foreign actors, are not deserving of scrutiny, nor that every dollar spent helping Ukraine repel Russia has been properly spent. Our recommendation is not, by any means, to abandon oversight of the Biden administration. But retain a balance: stay the course, recognizing that the reshoring agenda is good for American national security, good for American jobs, and—at least in this instance—not at all bad for Republican electoral prospects.

Economic statecraft is an agenda that will outlive the Biden administration, regardless of who is president come January 2025. Former President Trump has announced that he is seeking reelection in 2024, but looks likely to face sterner challenges than in 2016, and certainly 2020. His strongest potential opponent, Florida’s Gov. Ron DeSantis, has been a vigorous proponent of his state as a tourism and business partner for other countries, particularly those who have been friendly with the U.S. He has also promoted legislation to curb the influence of hostile countries, including the PRC, in his state.

Trump will enjoy many advantages in a head-to-head contest with DeSantis: greater name recognition, far superior natural oratory, and his own role as GOP kingmaker, which DeSantis himself benefitted from in his first race for governor. But the price the former president pays for changing Republican orthodoxy on trade and relations with the PRC is that, unlike in 2016, his 2024 opponents are less likely to be out-of-touch champions of the old consensus. Among the lessons of the 2022 midterms is that an America First economic statecraft will outlive Biden, and may outlive Trump.