Military Intervention Would Be a Disaster for Venezuela 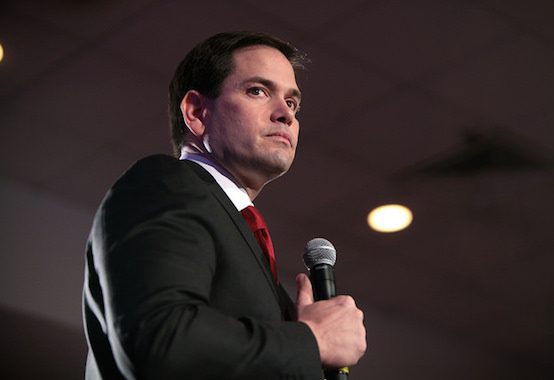 The Venezuelan opposition’s aid gamble over the weekend failed:

“After discussions tonight with several regional leaders it is now clear that the grave crimes committed today by the Maduro regime have opened the door to various potential multilateral actions not on the table just 24 hours ago,” Rubio tweeted late Saturday.

Tying the delivery of aid to the opposition’s effort to overthrow Maduro was a serious mistake on Guaido’s part, and one for which the people of Venezuela will pay the price. Rubio has been angling and hoping for a confrontation that could be exploited as a pretext for U.S. intervention, and he seizing on the violence at the Venezuelan border as an excuse to begin threatening Maduro more explicitly with U.S. intervention. Today, Rubio followed up his earlier hints at military intervention with a blunt, sick invocation of the results of the 2011 intervention in Libya:

Rubio’s ugly tweet met with an overwhelmingly negative response, but it confirms what most critics have assumed about the administration’s Venezuela policy from the start. A thinly-veiled policy of regime change has been leading up to calls for military action, and that is what we are going to start hearing now. Rubio is a reflexive hawkish intervetionist, and he has been the driving force behind the administration’s Venezuela policy. He has extraordinary influence over what that policy will be, and now he is making a clear threat that Maduro is going to meet the same grisly fate as Gaddafi. The parallels between this policy and the Libyan intervention were already worrisome, and now they are genuinely alarming. If Rubio wanted to give Maduro an additional incentive to hang on and fight to the bitter end, recalling Gaddafi’s violent death at the hands of his domestic enemies should do the trick.

No one can honestly look at the legacy of the Libyan intervention and conclude that it would be good to repeat the same policy in Venezuela, and a war in Venezuela would likely last longer and cost a lot more than the Libyan war did. Only a fanatical ideologue who doesn’t care about the consequences of regime change would think that this is a smart comparison to make. Rubio reveals the intentions of hawkish regime changers and discredits his own policy all at once.

Needless to say, escalating Venezuela’s crisis into an armed conflict would be a disaster for the people of Venezuela and for Venezuela’s neighbors. It would very likely keep the U.S. bogged down in an unnecessary and illegal war for years to come. Alternatively, the U.S. might repeat its Libya mistake of destroying the existing regime and then leaving the country to its chaotic fate. Either way, it would make things even worse for the civilian population and destabilize the surrounding region.