Is Russia a State Sponsor of Terrorism?

The Putin regime is evil, but it is not a sponsor of terrorism. 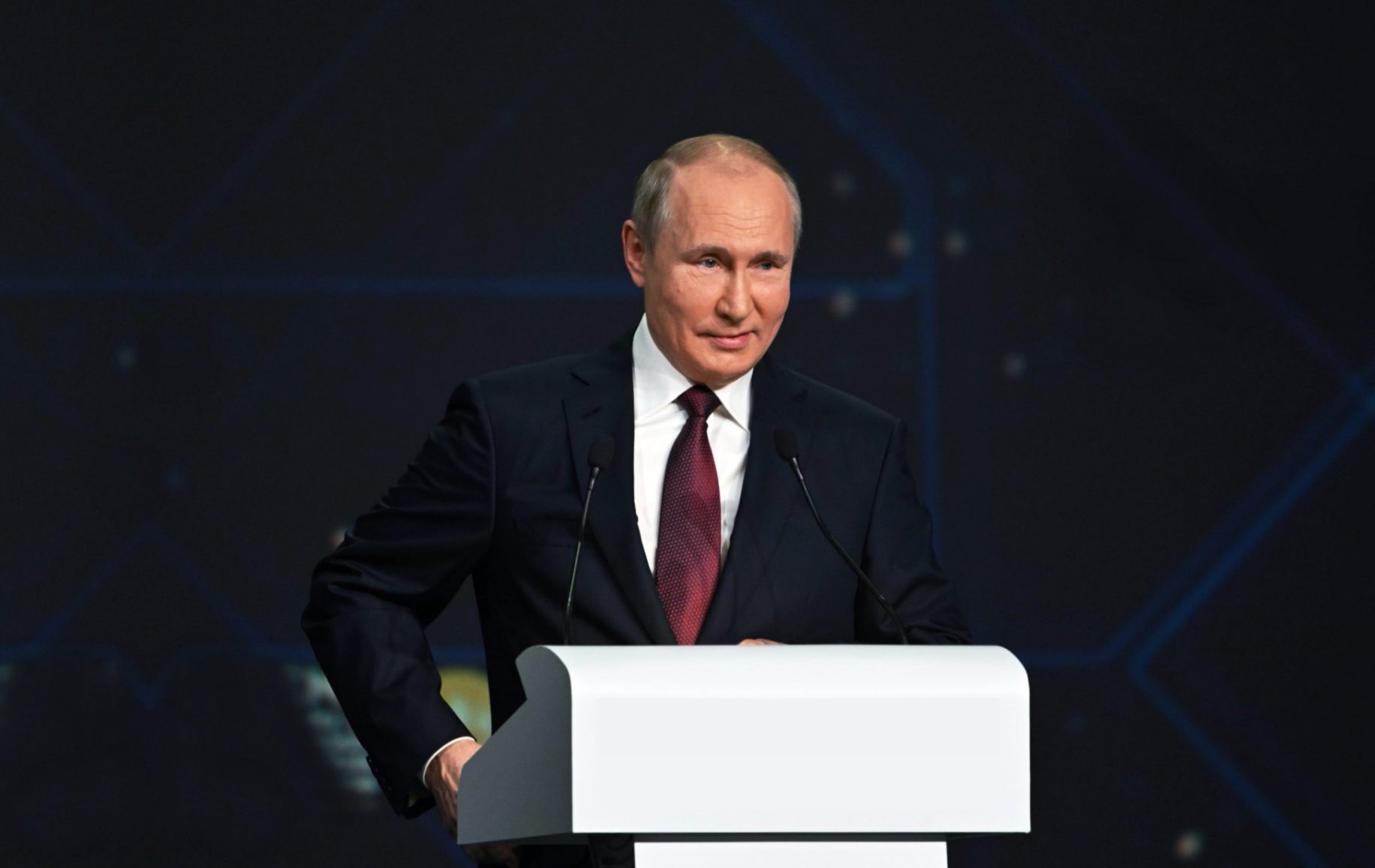 War continues to rage between Russia and Ukraine. The latter country is the victim of a terrible act of aggression and already has suffered greatly, with thousands of soldiers dead, millions of civilians displaced, and billions of dollars in damages. The fighting could continue for months or longer.

Kiev remains afloat due to abundant Western aid. President Volodymyr Zelensky has pushed the West for active military intervention, so far unsuccessfully. His latest gambit is to urge the Biden administration to declare Moscow a state sponsor of terrorism.

There is just one problem with the idea: Russia is not a state sponsor of terrorism.

Of course, the Putin regime is evil, having brutally invaded its neighbor. There was no justification for Russia’s aggression, though allied violations of multiple security assurances and expansion of NATO to Russia’s border help explain his decision. Moscow is a criminal actor. However, that does not mean it is a terrorist state.

Zelensky’s desire to get as much for his country from the West is understandable. In a comparable situation, any American president should do the same. Indeed, when seeking independence the American colonists assiduously lobbied the French monarchy for aid, which turned out to be critical for their victory. (Ironically, Paris’s war with Great Britain ultimately was disastrous for France, bleeding the monarchy financially and thereby contributing to the subsequent French Revolution. More evidence that no good deed goes unpunished, which Washington should bear in mind today.)

The terrorism designation is mostly meaningless, and would apply modest economic sanctions compared to those already imposed. The bill would compromise Russia’s sovereign immunity, but any additional impact likely would be marginal. Secretary of State Antony Blinken made this point: “The costs that have been imposed on Russia by us and by other countries are absolutely in line with the consequences that would follow from designation as a state sponsor of terrorism.” Calling a state or movement “terrorist” is primarily symbolic, a bit of name-calling to discredit the discreditable.

There still might be reason to do so if those designated as terrorists were, in fact, terrorists. However, the label has been repeatedly applied to regimes and movements that had not committed terrorism or long since abandoned the practice—Cuba, North Korea, Yemen (Ansar Allah, or the Houthis), Syria, Sudan, Iraq, and even Iran. In these cases, Washington tagged regimes that it did not like, often for very good reasons. But successive U.S. administrations demonstrated that being called a state sponsor of terrorism has nothing to do with terrorism.

Indeed, by the current standard, numerous countries could be placed on the state-sponsor-of-terror list, such as Myanmar/Burma, China, Eritrea, Turkmenistan, Pakistan, Rwanda, Nigeria, and Zimbabwe, just to name a few. Several U.S. allies deserve to be on such a list, too: United Arab Emirates, Bahrain, Turkey, and Egypt. So does Saudi Arabia, headed by Crown Prince Mohammed “Slice ‘n Dice” bin Salman, notable for murdering and dismembering his critics. The Kingdom is more repressive domestically and has killed more people internationally than even Russia.

By these loose standards, you could even argue that the U.S., whose wars over the last two decades have resulted in far more civilian deaths than anything Russia has done in Ukraine, should go on that same list. After all, Washington aided Saudi Arabia and the UAE in their murderous aggression against Yemen. The Bush II administration invaded Iraq under false pretenses, wrecking the country and triggering a sectarian conflict that consumed hundreds of thousands of civilian lives. America’s U.N. ambassador earlier admitted to the calculated killing of a half million Iraqi children through economic sanctions: “we think the price is worth it,” she infamously declared. Even Vladimir Putin does not speak so coldly about the mass killing of innocents.

The most obvious reason not to put Moscow on the list is to stop misusing a designation originally meant to apply to what most people would understand as terrorism. The practice of terrorism was recognized as a special horror and believed to warrant unique treatment. The label loses its meaning when applied for reasons other than a country’s having sponsored terrorism. It would be better to simply abolish the practice of naming countries state sponsors of terror than to continue diluting the label.

By separating the classification from the act, Washington has turned the label into just another special-interest contest, used to satisfy the clamorous and influential. That reduces the impact of the label, even when it is applied properly.

Republican presidents place Cuba on the list in an attempt to win votes in southern Florida, while Saudi Arabia and UAE, perpetrators of mass war crimes in Yemen, lobby to get the Yemeni Houthis placed on the list. And now there is substantial support on Capitol Hill to override presidential discretion and add Moscow by legislative fiat.

Among the most avid proponents of targeting Russia is Sen. Lindsey Graham, who declared: “To me, Putin is now sitting on top of a state terrorist apparatus.” Graham should know, since he wanted America to intervene in every war he spied—including Iraq, Libya, and Syria. He even spoke positively about attacking North Korea and triggering a nuclear conflict; at least the deaths would be “over there,” he declared, and not in America. Of course, total casualties could be in the hundreds of thousands or even more. Who is the real terrorist?

Including Moscow on the list would have two significant negative impacts on U.S. policy. First, it would harm our relations with other nations that deal with Russia. Graham seems enthused at the possibility of declaring economic war on the entire world, proclaiming: “It means that doing business with Russia, with that designation, gets to be exceedingly hard.” Imbued with hubris from years past, he would treat the rest of the world as a conquered province.

Washington would immediately be crossways with European countries still dealing with Moscow on energy. Moreover, given the refusal of most of the world outside of America, Europe, and U.S. allies in Asia to sanction Moscow—holdouts include such notable states such as China, India, Indonesia, Pakistan, South Africa, and Brazil—Washington could find itself in financial combat almost everywhere. On this issue the Global South would likely stand united. Its members long ago tired of U.S. hypocrisy. Many blame Washington for their current economic difficulties and likely would resist additional restrictions, forcing the Biden administration to decide how many adversaries it is willing to confront at once.

The designation also would make a negotiated settlement to the ongoing war more difficult. After all, who wants to talk to “terrorists”? Even humanitarian accords, such as that reached to move Ukrainian grain to market, would become more difficult to draft and promote. Anyone seeking to make a deal with Moscow would be more vulnerable to the sort of demagoguery routinely employed by Republicans going back to the Bush administration’s dishonest-but-effective campaign for the Iraq invasion. Subsequent exposure of the administration’s manifold and costly lies did not repair the damage done to the reputations of Bush’s political opponents.

Peace often requires making difficult compromises with unsavory people and movements. Yet negotiations with Moscow might be further impeded by the almost complete breakdown in relations if Russia acted on threats to close America’s embassy or break diplomatic relations. Neither happened even during the worst days of the Cold War. However, bilateral ties continue to fray. In Ukraine, U.S. officials have claimed credit for killing Russian generals and sinking Russian ships. They have stated that their goal is to weaken Moscow; to that end, they have labelled President Vladimir Putin a war criminal and called for his ouster. Calling him a terrorist, the worst designation in Washington’s official vocabulary, would push him even further toward fully rupturing the U.S.-Russian relationship.

Some advocates of applying the terrorism designation to Russia seem oblivious to the practical consequences of such an act. In their view, it is just another way to exhibit solidarity with Kiev. But Congress could achieve that by passing a resolution. The president could issue a proclamation of eternal friendship. Unfortunately, designating Russia a terrorist state would further drain the concept of meaning and make it harder to negotiate an end to the conflict. The only people who would benefit are those in the West who hope to fight Russia to the last Ukrainian, irrespective of the devastating consequences for Ukraine.

Finally, it is important for Americans to reclaim their political and legislative processes from outsiders seeking to capture U.S. policy. Acting as if he were a Senate colleague of Graham’s, Ukraine’s Zelensky in June declared “the urgent need to enshrine [the terrorism designation] legally.” Doing so might be in Kiev’s interest, but America’s interest is what the president and Congress both should be defending.

Zelensky has bravely rallied his country to resist Russia’s invasion. However, his political demands have overstepped the boundaries for any sovereign state. Graham and his colleagues should think first of America when making U.S. policy.

Russia committed a grave crime by invading Ukraine. Washington has appropriately aided Ukraine in its defense. However, Moscow is no more a terrorist state than many of Washington’s allies. A terrorist designation should be restricted to terrorists. The Biden administration should seek to expand, not contract, opportunities to end the conflict in Ukraine.