We Poked the Bear

We can now add the lives of Ukrainians to the death toll of two decades of unnecessary war, spurred by Washington’s arrogance and myopia. 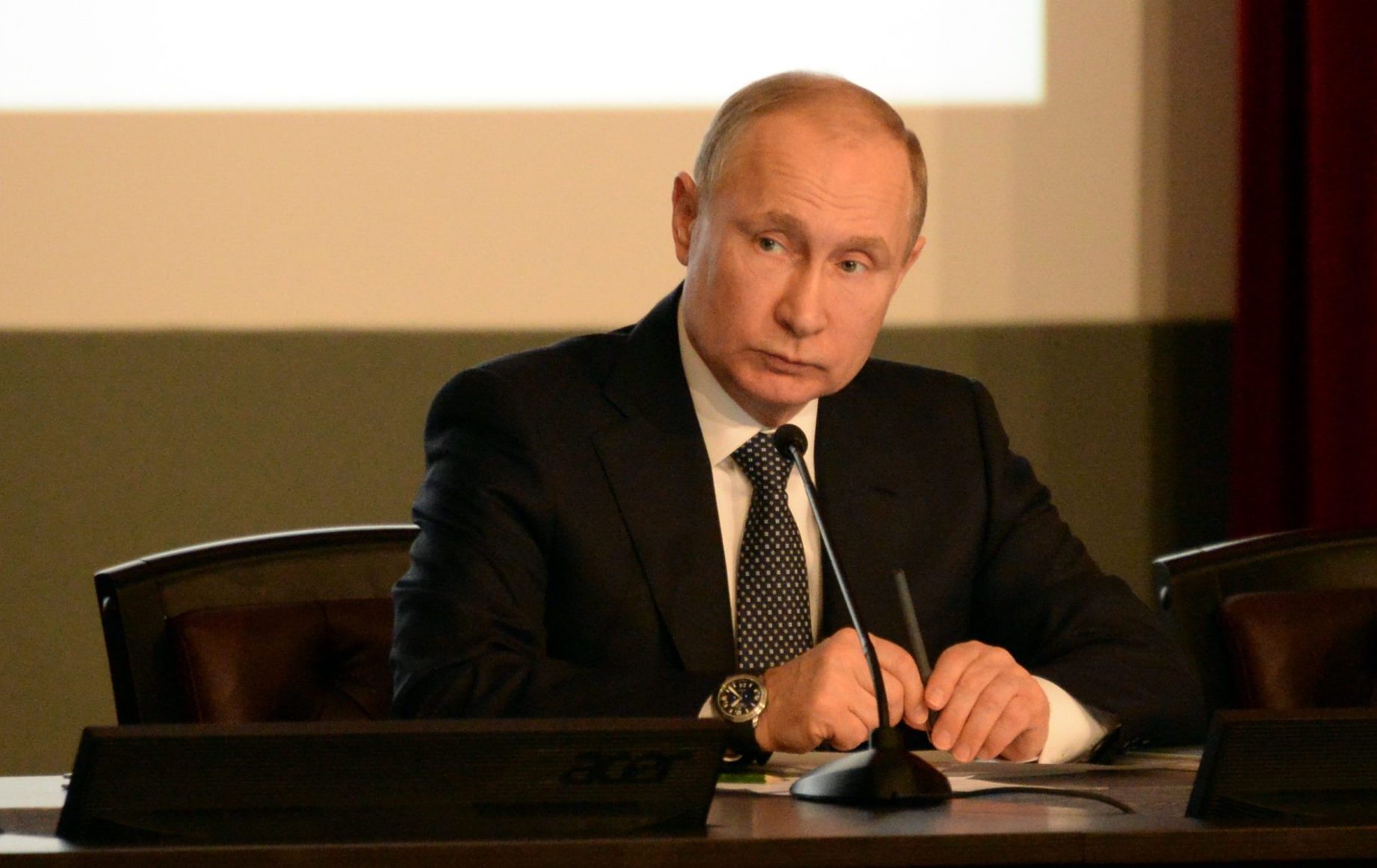 Russia and Ukraine are at war. Despite the warm words flooding forth from the West for Kiev, allied policy has been anything but pro-Ukraine. Indeed, America’s approach can best be described as fighting Russia to the last Ukrainian.

Most cynical has been the West’s Big Lie that Ukraine would enjoy eventual NATO membership. In 2008, at Washington’s behest, the transatlantic alliance told Georgia and Ukraine that someday they would be inducted. Western officials spent the last 14 years repeating that promise.

However, Tbilisi and Kiev are no closer to joining, an unofficial recognition that virtually no member wants to add either one. Yet Washington led the consensus rejection of Moscow’s demand that the two states be excluded in the future. Rather than admit the truth, alliance members prevaricated, even though admitting the truth might have forestalled Russia’s attack on Ukraine.

Now, in the aftermath of a war virtually no one expected, the allies deny their culpability. And the Eastern Europeans are offering a different meme: the Russians never could be trusted. For instance, contended Latvian parliament member Rihard Kols, “In general, the Baltics have been warning our colleagues in the West to be vigilant and not fall into naïveté based on wishful thinking. The constant readiness to restart relations with Russia, regardless of what its breaches have been, is what got us to this day, unfortunately.”

Indeed, some East Europeans exude an arrogant sense of entitlement, as though America’s failure to fulfill some imagined obligation to protect them explains today’s crisis. Insisted Polish politician Radek Sikorski: “When I demanded on numerous occasions that our membership in NATO be fulfilled by physical presence—and I was only asking for two brigades, which is to say 10,000 American troops—this was regarded as outrageous.” [Italics added.] Countries like Germany “didn’t feel our pain of being a flank country, of being on the edge of the world of democracy, rule of law and security.”

Yet there is no evidence that Russians possess a double dose of original sin. Instead, it is apparent that Western leaders, and especially American policymakers, ignored what many Russians were telling them. Indeed, the arrogance was especially invincible on the U.S. side of the Atlantic.

Long forgotten is Vladimir Putin’s conciliatory speech to the German Bundestag more than two decades ago. He explained:

No one calls in question the great value of Europe’s relations with the United States. I am just of the opinion that Europe will reinforce its reputation of a strong and truly independent center of world politics soundly and for a long time if it succeeds in bringing together its own potential and that of Russia, including its human, territorial and natural resources and its economic, cultural and defense potential.

He went on to declare: “One of the achievements of the past decade is the unprecedentedly low concentration of armed forces and armaments in Central Europe and the Baltic. Russia is a friendly European nation. Stable peace on the continent is a paramount goal for our country, which lived through a century of military catastrophes.”

However, his attitude changed as NATO advanced. Despite the mass amnesia that appears to have afflicted the Cold War’s victors, they offered numerous assurances to Soviet and Russian officials that NATO would not march ever eastward to Russia’s borders. For instance, reported George Washington University when it released a trove of declassified U.S. documents: “Secretary of State James Baker’s famous ‘not one inch eastward’ assurance about NATO expansion in his meeting with Soviet leader Mikhail Gorbachev on February 9, 1990, was part of a cascade of assurances about Soviet security given by Western leaders to Gorbachev and other Soviet officials throughout the process of German unification in 1990 and on into 1991, according to declassified U.S., Soviet, German, British and French documents posted today by the National Security Archive at George Washington University.”

The allies also whispered sweet nothings in the ears of Russian President Boris Yeltsin and those around him. Explained GWU: “Declassified documents from U.S. and Russian archives show that U.S. officials led Russian President Boris Yeltsin to believe in 1993 that the Partnership for Peace was the alternative to NATO expansion, rather than a precursor to it, while simultaneously planning for expansion after Yeltsin’s re-election bid in 1996 and telling the Russians repeatedly that the future European security system would include, not exclude, Russia.”

In a detailed study, UCLA’s Marc Trachtenberg concluded that the allies originally promised to respect Moscow’s security interests. However, he added: “It was only later that U.S. leaders realized that the USSR had become too weak to prevent them from doing whatever they wanted. So by mid-1990, the February assurances were no longer taken as binding. What Gorbachev called the ‘sweet talk’ continued, but the whole vision of a cooperative relationship based on mutual trust and mutual respect, it became increasingly clear, was at odds with the reality. All of this was, and still is, deeply resented in Russia.”

One of those unhappy Russians was Vladimir Putin. Nor was the issue just NATO expansion. The aggressive war against and dismantlement of Serbia angered the Russian people as well as government. So did Western support for “color revolutions” in Tbilisi and Kiev. Too accurately for comfort, Putin complained to the 2007 Munich security forum that Washington had “overstepped its national borders in every way,” whose “almost uncontained hyper use of force” was “plunging the world into an abyss of permanent conflicts.”

Nevertheless, he returned to the transatlantic alliance, explaining: “NATO has put its frontline forces on our borders, and we…do not react to these actions at all.” He added:

I think it is obvious that NATO expansion does not have any relation with the modernization of the alliance itself or with ensuring security in Europe. On the contrary, it represents a serious provocation that reduces the level of mutual trust. And we have the right to ask: against whom is this expansion intended? And what happened to the assurances our western partners made after the dissolution of the Warsaw Pact? Where are those declarations today? No one even remembers them. But I will allow myself to remind this audience what was said. I would like to quote the speech of NATO General Secretary Mr. Woerner in Brussels on 17 May 1990. He said at the time that: “the fact that we are ready not to place a NATO army outside of German territory gives the Soviet Union a firm security guarantee.” Where are these guarantees?

Russian complaints continued. Early the following year a State Department cable (released by Wikileaks) reported: “Ukraine and Georgia’s NATO aspirations not only touch a raw nerve in Russia, they engender serious concerns about the consequences for stability in the region. Not only does Russia perceive encirclement, and efforts to undermine Russia’s influence in the region, but it also fears unpredictable and uncontrolled consequences which would seriously affect Russian security interests.”

Some outside observers recognized the danger created by this perception. State added: “[Dmitri] Trenin, Deputy Director of the Carnegie Moscow Center, expressed concern that Ukraine was, in the long-term, the most potentially destabilizing factor in U.S.-Russian relations, given the level of emotion and neuralgia triggered by its quest for NATO membership. The letter requesting MAP consideration had come as a ‘bad surprise’ to Russian officials, who calculated that Ukraine’s NATO aspirations were safely on the backburner.”

It’s crucial to note that Putin has presided over four waves of NATO enlargement and has had to accept Washington’s withdrawal from treaties governing anti-ballistic missiles, intermediate-range nuclear forces, and unarmed observation aircraft. For him, Ukraine is the last stand. The Russian commander-in-chief is supported by his security and military establishments and, despite the Russian public’s fear of a war, faces no domestic opposition to his foreign policy. Most importantly, he cannot afford to be seen bluffing.

None of this justifies Russia’s attack on Ukraine, of course. However, the problem is not that the allies ignored East European demands that Washington garrison states of little relevance to its own security. Rather, it is that the U.S. and its allies ruthlessly ran roughshod over Russian security interests in expanding NATO up to Russia’s border—just 100 miles away from St. Petersburg. Moreover, Washington repeatedly demonstrated its willingness to aggressively promote regime change, through financial and diplomatic support as well as military force.

Washington sought to impose its will not just in its own sphere of influence, the Western hemisphere, but in countries once part of the Russian Empire and Soviet Union. Allied claims to be surprised and shocked by Moscow’s complaints are careless at best, dishonest at worst. The West thought there was nothing Russia could do. Alas, the U.S. and its allies were wrong.

Of course, the past will do little to solve the present. However, Washington policymakers should start learning from their mistakes. Two decades of disastrous wars have left thousands of Americans and hundreds of thousands of foreigners dead. To this toll can be added those dying in Ukraine, another unnecessary war spurred by Washington’s arrogance and myopia.