Covington Catholic and the Absolute Failure of Adults 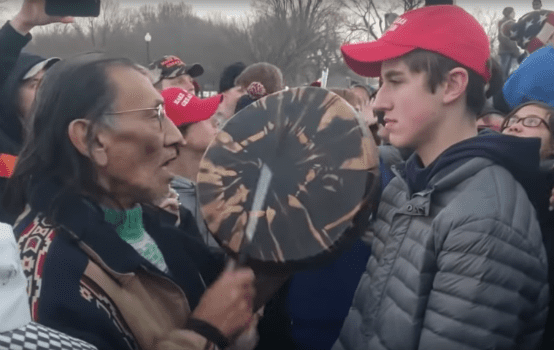 As everyone knows by now, a group of high school boys from Covington Catholic attended the pro-life march in Washington and visited the Lincoln Memorial. There they were accosted by a group of racist Black Israelites — grown men who were yelling at 14-year-old kids, “you little dirty ass crackers, your day coming” and “I will stick my foot in your ass!” A Native American protester then marched towards the students while beating a drum.

Naturally, the national media did not report that this group of black supremacists had hurled racial epithets at children. Instead, the students were painted as racist villains. The media mob accused the kids of surrounding and mocking an elderly Native American veteran.

This whole event is beyond stupid. If the students hadn’t been wearing MAGA gear, this would not be a national news story. Yet the children’s church felt the need to condemn its own members. Their diocese sent out a bunch of “not our values” PR crap. Why didn’t they wait to get all the facts? The unedited two hour video shows a group of immature kids caught in a bizarre situation. And it raises the great question of our age: where the hell are the adults?

Adults, whatever their political persuasion, should not be focusing on the kids in this story. Even if they acted disrespectfully, teenage boys will act like teenage boys because they are—gasp!—teenage boys. That wouldn’t exonerate their behavior if they did what they were accused of doing, but the full video shows that the narrative ran away from reality. What they actually did isn’t worthy of national attention. Even if you hate Trump, anyone with an ounce of perspective should understand that kids doing Fortnite dances is not malevolent. The real problem is that the adults failed to act like adults.

The most egregious adult failure came from the Kentucky diocese that threw its own children under the bus. Responsible leaders would have waited for more information before issuing a statement. These kids were violently threatened by deranged lunatics only to be threatened with expulsion from their school. Church leaders are supposed to be shepherds, but they’ve been so beat up by the child abuse scandals that they no longer have any fight in them. And by failing to wait for the full story, the Church betrayed its youth once again, along with the entire pro-life movement by legitimizing propaganda against it. In a culture that views Christianity as synonymous with bigotry, the Catholic Church needs to be able to withstand a little cyberbullying.

The other institution that failed is the media—but does anyone really expect better from them? Everyone understands that American news is now political by nature. Choosing to cover a group of high school boys acting immaturely rather than the fact that 300,000 people marched against abortion is an act of bias prior to any intentional spin. Adults are media savvy enough to understand that we are quick to accept news that reinforces our views. Washington Post readers who painted these kids as a neo-lynch mob were beyond juvenile.

It is also incredibly idiotic to start banging a drum at a bunch of kids. What in God’s name is that supposed to accomplish? A grownup who antagonizes children for wearing MAGA hats is not a victim; he’s a clown. White liberals have an ugly tendency to portray those who aren’t white as children, which is how the adult in this situation ended up painted as the poor victim. He should be held to a higher standard. Native Americans are not perpetually stuck in anti-pollution ads with tears dripping down their eyes; they are adults with agency. This man had plenty of options open to him; he chose to accost kids with a drum, and then turn around and call them scary. Scary? Some of these kids look like smug jerks, but how is an adult scared of a 90 pound 14-year-old?”

Finally, where were the adults chaperoning these kids? What grownup lets teenagers chant school fight songs at a group of racists threatening violence? People should have diffused this situation. Instead they banged drums.

Nothing about this is morally complex. Adults need to be held to a higher standard than children, period. The problem is that we live in a deeply juvenile age. The people who run our institutions—those who organize political rallies, run church dioceses, and write our news—have all emerged from this immature cesspool. A new Solon will not emerge from a culture that thirsts to ruin kids’ lives just because of politics. So once again, we ask in futility: where are the adults?