The U.S. and Iran are playing a dangerous game of nuclear chicken, with each country daring the other to make the first move. 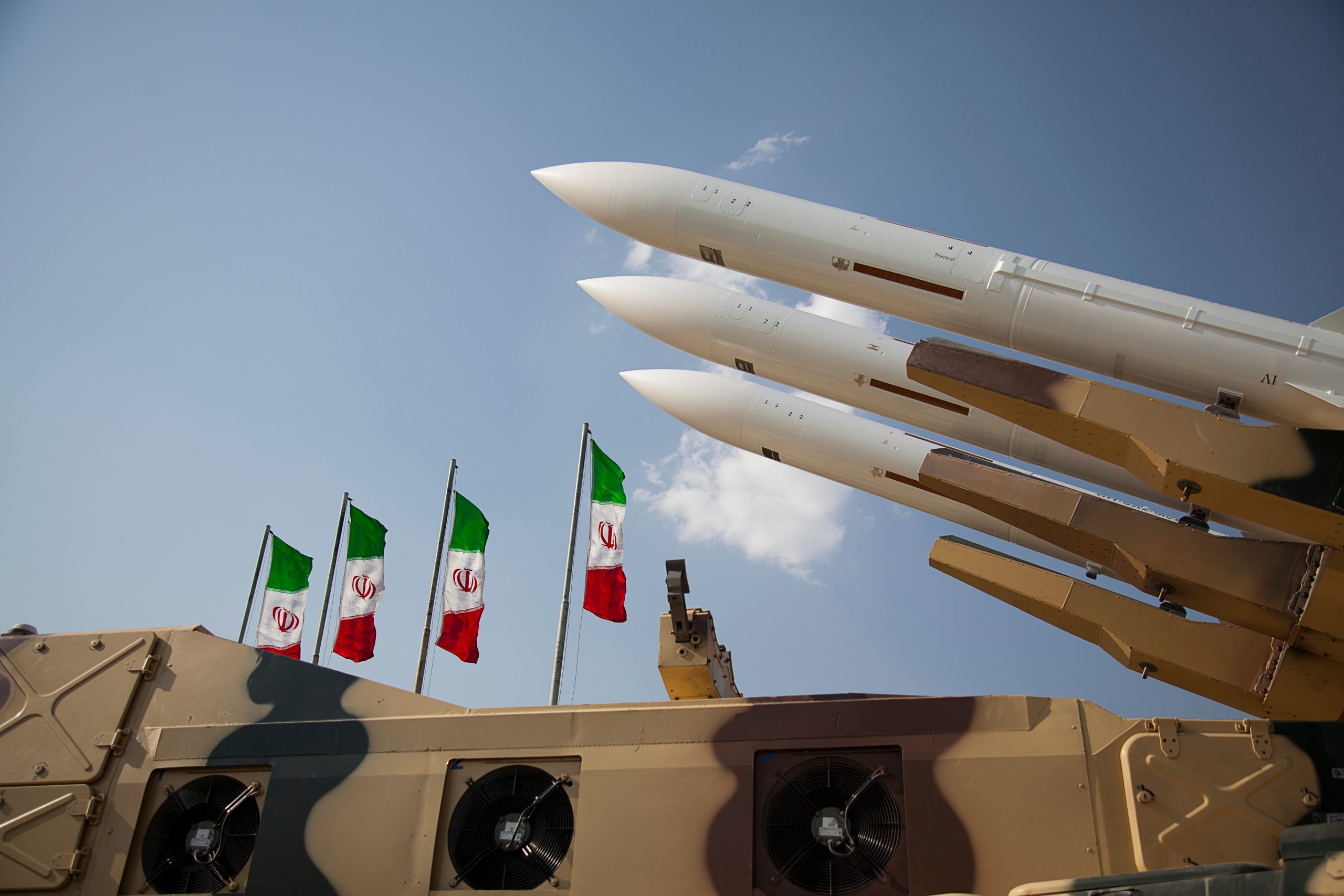 President Joe Biden campaigned on rejoining the international community; he promised the U.S. would once again participate in the Paris Climate Agreement, the World Health Organization, and the Iran nuclear deal (JCPOA). Within days of Biden’s swearing in, the U.S. had rejoined the first two, but any accord with Iran is fast slipping out of reach.

Biden has not yet started talks with Iran, and all the sanctions the Trump administration enacted remain in place. The U.S. military continues to gear up for an all-out war with Iran. Iran refuses to sit down for negotiations with the U.S. unless sanctions are lifted, and Biden says his administration will not lift sanctions just to bring them to the negotiating table. Meanwhile, Iran recently announced that it has begun enriching uranium up to 20 percent at an underground facility. They are only a technical step away from a weapons-grade level of 90 percent. We are playing a dangerous game of nuclear chicken, with each country daring the other to make the first move. Despite the campaign rhetoric, the Biden administration’s governing posture towards Iran is virtually unchanged from Trump’s.

Last Thursday, Biden authorized U.S. airstrikes on what were described as Iranian-backed militias in Syria in retaliation for strikes in Iraq. Although Iran denies that it is involved with the militias or the Iraq strikes as the U.S. claimed, it’s hardly an overture to peace talks.

“Hope is fading for a quick return to the Iran deal….The alternative to the deal is war, and that could quickly escalate to a cataclysm in the Middle East that would make the wars in Iraq and Afghanistan look like warmup acts,” said nuclear nonproliferation expert and Quincy Institute fellow Joe Cirincione in an interview with TAC.

There may only be a few months left to save the deal, after which both countries will have reached the point of no return, nonproliferation experts told TAC.

“I think Biden wants back in the Iran Deal,” said ⁦Jeffrey Lewis, professor at the Middlebury Institute of International Studies at Monterey. “So, why are they screwing around?”

Hardliners in Iran, just like their counterpart critics of the Iran deal on the Hill, don’t want to see the deal return, and they are all too willing to run out the clock.

Last week, Biden’s team, along with its European partners, offered to start talks with Iran, but it does not appear Iran will accept an offer to talk without some form of sanctions relief.

If the United States wants to get Iran back to the negotiating table, as candidate Biden promised during the campaign, Washington could work with friendly governments, like South Korea, to partially unfreeze Iranian assets, or work with the International Monetary Fund to provide Iran with humanitarian aid, something candidate Biden said he was willing to do. But so far, President Biden has not followed through on that promise.

Sanctions have crushed Iran during the pandemic. The failure to offer humanitarian aid has created “a sense in Tehran that the Biden administration, in fact, wants to continue Trump’s maximum-pressure policy but with a smile,” said Ali Vaez, the Iran project director at the International Crisis Group, to Foreign Policy.

After Trump unilaterally withdrew from the deal in 2018 and imposed harsh financial sanctions, Iran retaliated by seizing oil tankers in the Strait of Hormuz, lobbing missiles at Iraqi and U.S. bases, and launching strikes on a Saudi oil installation that disrupted the global oil supply. They also started enriching uranium. The U.S. retaliated by seizing Iranian oil tankers and launching a drone strike that killed Quds Force commander Qasem Soleimani.

“When I look back on it, it’s really just luck that we didn’t go to war with Iran” during that time, said Lewis.

It was all a giant repudiation of former Secretary of State Mike Pompeo’s “maximum pressure” strategy; and it yielded an Iran that was on a better war footing, closer to (but still a few years away from building) a nuclear weapon.

“It’s really remarkable to realize that nothing has changed under Biden…and that’s because of a conscious strategy on the part of the Trump team,” Cirincione said. It turns out that it’s not as easy to undo Pompeo’s Iran strategy as some might have hoped.

From the Quincy Institute’s Responsible Statecraft:

Known as the “sanctions wall,” architects of the Trump administration’s Iran policy targeted entities subject to nuclear-related sanctions relief under the Obama administration with duplicative terrorism designations. They said this double layer could create a “sanctions wall of political and market deterrence” to undermine a future administration’s ability to ease or lift sanctions. But on closer examination, their efforts created less a “wall” than a transparent edifice built on political calculations.

The Trump administration purposefully crafted a series of onerous sanctions that would be difficult for a subsequent administration to remove. They were successful. Experts told TAC that it will take months or even years to remove the wall of sanctions and banking restrictions that were enacted.

But unlike those agreements, which were quickly reentered during Biden’s first month in office, Biden’s team has made relatively little progress on reentering the Iran deal, “exchanging their original theory of ‘compliance for compliance’ with the mantra that Iran must first come back into complete compliance before the US moves,” writes Cirincione. “This is a variation of [President Trump’s former national security advisor] John Bolton’s ‘Libya Model.’ The other side must do everything before the United States does anything.”

The bottom line on Iran is that time is running out. Sources at the State Department say there is a lot of resentment and anger over Iran’s use of pressure tactics; Iran’s recent seizing of oil tankers didn’t help matters.

There’s also domestic politics to consider. Biden has to get his nominees confirmed, and right now, that means getting them past the powerful chair of the Senate Foreign Relations Committee, New Jersey Democrat Bob Menendez. Menendez opposed the Iran deal, and he has recently pushed Biden to toughen his stance on Iran. The senator has said Iran should not receive “significant sanctions relief” before negotiations resume. The Biden administration does not want to upset the apple cart while they still have to get their nominees through his committee, sources close to the process told TAC.

Perhaps due to his 36 years in the Senate, Biden is only too aware how much time must be invested greasing the wheels in the smoke-filled corridors of power where the deals get made on Capitol Hill. That’s one advantage Biden has over Obama.

“The Obama administration really dropped the ball in terms of engaging the Hill on the original JCPOA,” said one Democratic Capitol Hill staffer involved in the discussions, who spoke anonymously to Foreign Policy. “There are still battle scars on the Hill in terms of being left out of the loop by Obama and then having to swallow a deal that had a lot of opposition to it, even among Democrats. Blinken and Sullivan have been reminded they better not do the same thing. And this time, they’ve been much more consultative.”

The trouble is, “Biden can’t simply put Iran on hold,” Cirincione said. “Time is not on his side. There are too many things that could go wrong and too many saboteurs in both nations that want to kill the deal. The longer he waits, the more likely it is that an incident in the Middle East wars, such as Israeli attacks on Iranian sites and personnel, or the recent Iraqi militia attack that killed an American contractor in Erbil, will trigger a larger conflict.”

“The JCPOA is a good deal and the US/Iran should work to return to compliance,” tweeted Eric Brewer, a senior fellow on nuclear nonproliferation for Center for Strategic and International Studies (CSIS). “Yes, there are legit critiques of the deal. But in the real world policy is about choices among alternatives. We don’t need to guess about the alternative to the JCPOA. We’re living it now – and it is far worse.”

During the Obama years, Democrats insisted that the Iran accord was the “best deal” the U.S. could get. So the Biden administration position is confusing: Have his officials “changed their minds?” asks columnist Fareed Zakaria.

“If the Biden administration screws up rejoining the JCPOA by insisting Iran ‘make the first move,’ even though it was the U.S. that left the deal in 2018 while Iran was still in full compliance, it will be a sign that they aren’t as adept at diplomacy as they claim to be,” wrote Stephen Walt, professor of international affairs at Harvard University’s John F. Kennedy School of Government.

“My advice to the Biden administration would be: Don’t wait. Rip the band aid off. You’ve got to be talking to Iran,” Cirincione said. “It’s political calculations, not national security calculations, that are preventing a return to a deal. If you wait, Iran will proceed down the path to a bomb; it’s absolutely certain.”