Why would the ambassador of a country with just 1.5 million citizens feel able to shout at a member of the U.S. Congress? “Because for decades, we have pursued a foreign policy that put their interests ahead of our own,” wrote Trita Parsi, co-founder and executive vice president of the Quincy Institute for Responsible Statecraft, […] 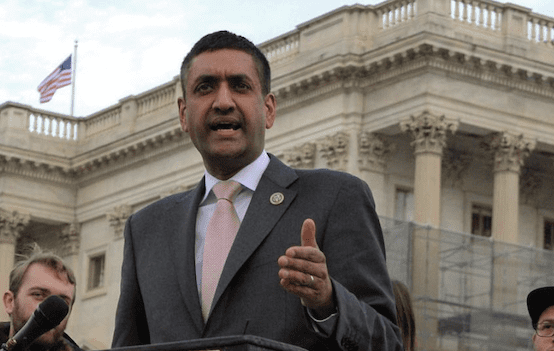 Why would the ambassador of a country with just 1.5 million citizens feel able to shout at a member of the U.S. Congress? “Because for decades, we have pursued a foreign policy that put their interests ahead of our own,” wrote Trita Parsi, co-founder and executive vice president of the Quincy Institute for Responsible Statecraft, in a tweet. “We created this monster.”

Rep. Ro Khanna’s efforts to end U.S. support for the war in Yemen so infuriated United Arab Emirates Ambassador Yousef Al Otaiba that he went to the California Democrat’s office and screamed at the congressman during a meeting, said Khanna.

“I’ve never had an ambassador of another country come to my office and literally yell at me, but that’s what I had with the ambassador to UAE,” Khanna said during an interview for the Intercept’s podcast “Deconstructed.”

A lead sponsor of a resolution to end U.S. involvement in the war in Yemen being waged by Saudi Arabia and the UAE, Khanna was shocked by the ambassador’s shouting.

“I was just taken away,” Khanna said. “It led me to think that there’s a real arrogance, a real sense of entitlement, a sense that he thought himself so powerful that he could act that way. And I’ve never really seen that before…I just thought this was an indication of how entrenched these interests were.”

While the Congressman, sworn in January 2017, is relatively new to Washington, Otaiba is well known in the rarefied circles of the Washington establishment. Three years ago, Huffington Post published a piece about him that teased: “Yousef Al Otaiba is the most charming man in Washington: He’s slick, he’s savvy and he throws one hell of a party. And if he has his way, our Middle East policy is going to get a lot more aggressive.”

Since 2015, the UAE and Saudi Arabia have been at war with the Houthi forces in Yemen. The war has killed 100,000 people in Yemen, including more than 12,000 civilians, as well an estimated 85,000 dead due to famine as the result of the war, according to ACLED. Six years of war in Yemen has also left 2.3 million children under 5 years old facing acute malnutrition in 2021, with 400,000 of those children at risk of dying without urgent treatment, according to the United Nations World Food Program.

Otaiba is a key figure in the UAE’s Washington influence game. He was often seen wining and dining members of the Obama administration and Congress; the Four Seasons in Georgetown was his favorite power-breakfast spot, reported the Huffington Post.

“He doesn’t work the tables. People come to him,” says one regular. He makes the perfect Washington dinner guest: A Muslim who’ll raise a glass and offer inside insights on the volatile politics of the region. “He is incredibly savvy,” says a former White House aide. “He throws great social events. He understands how Washington works, how the Hill works, which a lot of these countries don’t. He knows the dynamics and how to pit different entities against each other when he needs to.” Richard Burr, the Republican chair of the Senate Intelligence Committee, says, “I’ve spent probably more time with Yousef than I have anybody.”

…“He’s influential with certain parts of the Hill, making them doubt what this [Obama] administration is doing with regard to Iran. And it feels less partisan because it’s not Israel but an Arab country,” says the second senior U.S. official. The first U.S. senior official added that Otaiba and Israeli ambassador Ron Dermer are very close. “They agree on just about everything,” he says. (Excluding the Palestinians, he clarified.)

The UAE took several key positions that put them at odds with the Obama administration: The Gulf state bitterly protested Obama’s Iran nuclear deal; helped fund the toppling of Muslim Brotherhood-backed Egyptian president Mohammed Morsi; and in August 2014, together with Egypt, launched secret bombing raids in Libya to aid anti-Islamist forces. The UAE also temporarily backed out of helping the U.S. in Syria.

After Obama left office, Otaiba cozied up to Trump’s son-in-law and Middle East peace deal architect Jared Kushner. Kushner often left the State Department in the dark as he worked diplomatic back channels, which suited Otaiba just fine. Then-Secretary of State Rex Tillerson was caught off guard when Saudi Arabia and UAE announced their blockade of Yemen, according to reports. Tillerson later pushed the two nations to scrap a planned invasion of Qatar, directly after which Tillerson was fired. Leaders of Saudi Arabia and the UAE later claimed they had worked their back channels and close relationship with Kushner to have Tillerson fired-by-tweet.

These decisions all show Otaiba, Saudi Arabia, and the UAE’s growing regional power and influence during the Obama and Trump years. At one time, it would have been unthinkable for a diplomat from a small country to scream at a congressman from a nuclear powerhouse like the United States.

“But the UAE now considers itself to be part of the management team when it comes to overseeing the U.S.-led Western global project,” reports the Intercept. “Otaiba’s posture toward Khanna reflects the evolving nature of the world’s governing elite.”

Khanna had earned Otaiba’s wrath by sponsoring efforts in the House that would end U.S. support for the Saudi war in Yemen. The legislation matched a war powers resolution Sen. Bernie Sanders had introduced in the Senate in 2017. In 2019, the resolution passed both chambers, but Trump vetoed it.

A representative of the UAE in Washington, D.C., denies the ambassador raised his voice at Khanna, but the ensuing controversy has led to an interesting development. Last week, Otaiba invited Khanna, outspoken opponent of the war in Yemen, to join the diplomat on his official podcast.

“Over thirteen years in Washington, and even longer in public service, I have raised many issues with many people—but I have never once raised my voice,” Otaiba wrote to Khanna. “Making my point directly and calmly is more my style. And that’s how I remember all of our meetings. Let’s prove the point that two passionate advocates can have another direct and calm discussion about serious issues.”

In an official letter, Khanna responded by saying that he could not appear on Otaiba’s podcast unless the diplomat used his influence to secure the release of Adel Al-Hasani, a well-known Yemeni journalist imprisoned for over five months by forces aligned with the UAE. Al Hasani’s attorney said he has been tortured in prison and is in declining health.

“Right now, it would not be appropriate for me to appear on your podcast while a well-known journalist is detained with the support of your government,” Khanna wrote in the letter. “Al-Hasani’s release [would] highlight the pivotal role the UAE can play in building bridges between disparate groups in the Middle East and the US, and how both of our nations can help bring an end to the war in Yemen.”

As one of his first acts on foreign policy, President Joe Biden ended U.S. support for Saudi-led offensive operations. Khanna said he is not yet ready to reintroduce his war powers resolution, because he wants to give the Biden administration and regional forces time to end the conflict.

“What activists must now advocate for is for President Biden to say these words: ‘All bombing and war funding to Yemen must stop’,” said Khanna. “We have a moral duty to act to end the war, not just wash our hands of it. We can always tell the Saudis we will stop providing tires for their airplanes if they continue to bomb.”

The peculiar arc of this story, from the shouting, to the war powers resolution, to the podcast invite, all show something we don’t see very often in Washington anymore: the power that individual members of Congress can wield, should they choose to use it.