The Empty Inauguration of Joe Biden

Is it morning in America? Or are we due for another post-9/11-style security state crackdown? Wednesday offered no answers. 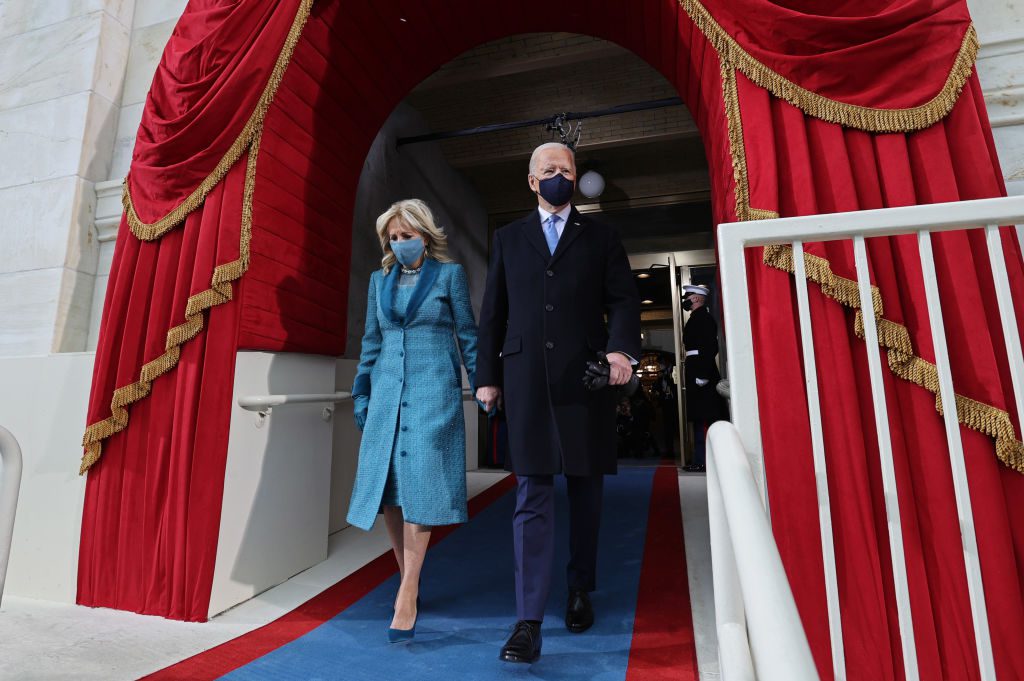 If presidential inaugurations are all about symbolism, what to make of this one?

There was no grace present as Trump slunk off early in the morning, an embittered use of Air Force One while he still controlled it. No reports of Downton Abbey-like farewells with the White House staff. No first lady tea ceremony. Hell, it’s not like the Bidens haven’t seen the place before. The Trumps left the White House the way most people leave a hotel: might as well get an early start on it.

If a city could cry, it’d be D.C. Washington on Wednesday certainly did not look like the capital of the World’s Greatest Democracy, or even a mediocre one. For those who have fetishized Nuremburg imagery over the last four years, the Mall covered in flags ought to ring a bell. As might the 26,000 troops who lined the closed streets, quartered in the Capitol itself, more boots on the ground than are currently in Iraq, Afghanistan, and Syria combined. The U.S. military failed to establish democracy after two decades of nation building over there. Perhaps they’ll have better luck over here.

But even the Guardsmen sent a mixed signal—somebody was worried enough about their loyalty to have the FBI vet the lot, and send 12 home for whatever “ties to right-wing groups” actually means. Actually they made “inappropriate comments or sent inappropriate texts,” thoughtcrimes once protected by the 1A.

Ironically, after all the fuss over crowd size four years ago, Joe Biden probably had the smallest inauguration crowd in American history—roughly a bus load. But don’t worry. Mimicking the tone of North Korean state media, the New York Times assured us that because of COVID, Biden’s “team has become adept at political set dressing aimed at making empty, unpopulated spaces appear welcoming, warm and patriotic.”

Then there was Trump 2017, when the media symbolically marked the beginning of four years of playground taunting, calling him a liar by challenging his crowd size. Trump was not legitimately elected, they said, because no one showed up to cheer him into office. For the younger folks reading this, the narrative about half of America approached Inauguration Day 2017 with was that Trump did not win the popular vote and thus the Electoral College was a sham and Trump was as illegitimate as one of Snoop’s kids. It was a different time, when questioning the results of an election was considered patriotic, not seditious.

But as symbols go, what didn’t happen at Biden’s inauguration is most noteworthy. For four years, we had been told that today was never going to happen. Trump was going to declare himself dictator, cancel the election because of COVID, start a war with Iran, start a nuclear war with someone, or declare martial law. Yet the only tanks on the streets were put there by Democrats.

The Charge of the Rednecks on January 6 was whipped into another 9/11 but worse by the Dems/MSM. Though the crowd arrived with pipe bombs and zip ties in their pockets, strong indicators of preplanned trouble, Trump was impeached for inciting them. Though the mob had absolutely no way to stop Biden from becoming president, they were called seditious.

In the end, absent some tragic deaths, the mob didn’t even prove to be effective vandals. Our sacred heartland state houses were not bum-rushed by Big Gulp-sized guys in camo, each carrying enough supply to keep a squad in the field for a week in Iraq. Trump didn’t even pardon himself or his kids. Giuliani still at large!

So on Inauguration Day, everyone was left wondering what just happened and what it means. Joe Biden is the first president to win office without campaigning. His record was enough to deny him a win twice before when he did campaign, so alongside his non-inauguration, a pattern might be emerging. He’ll sign some symbolic executive orders undoing Trump’s symbolic executive orders and then remember he forgot a few things in the basement in Delaware and leave a note for himself on the Resolute Desk saying he’ll keep in touch. And the question pends—can Kamala really play the Garfunkel role Biden himself excelled at?

Inaugurations used to be fun. They were the last time a candidate, warm and of the people, got to mingle with those people before becoming aloof and over-protected. The same guy who shook greasy hands at county fairs all summer would “spontaneously” stop the limo on Pennsylvania Avenue and walk a few blocks, waving and pointing like he recognized people who owed him money. High school bands would play. At night, the city would be filled with drunken donors and drunken political operatives and drunken young people who would giggle at old people trying to dance to the “popular” musical groups included in the festivities. This year, no. We got America’s blandest man, Tom Hanks, and the safe brown guy white people love, Lin Manuel Miranda. The Bidens, meanwhile, likely went to bed early after a little TV.

And so Trump is gone not with a whimper, nor a bang, but mostly with silence. Next? The inauguration offered few clues. Biden mumbled about unity, but was quite short on specifics as to what that meant when 70 million Americans voted for Trump in the November referendum. Nearly every speaker invoked the language of the Civil War, and nearly everyone referenced the Capitol mob in dire terms. The Capitol cop who acted with courage that day was feted.

Biden’s speech gave no clue how he might unify America on immigration, for example. Apparently you don’t, as Biden seeks to rewind everything Trump did, set a pathway to citizenship for millions of illegals, and re-welcome the faux asylum-seeking caravans steaming up from Central America. Not much unity there, and likely the same for America’s long list of hot button issues.

Meanwhile, shadows loom. Dark forces around Biden will seek to turn America’s fear that 1/6 was the next 9/11 into a new war on terror, the domestic kind. The tools are already in place from the last war on terror—surveillance, unconstitutional searches, the secretive FISA court, a politicized FBI, and an intelligence community that made its bones in internal politics pimping Russiagate and serving as a Greek chorus to CNN’s and MSNBC’s flood of warnings about democracy in danger.

The Defense Department already announced stepped-up monitoring of service members’ social media in much the way companies do with their employees. Avril Haines, Biden’s pick for national intelligence director, says she’ll help with a public threat assessment of QAnon, America’s Greatest Threat. She also vows that the intelligence agencies will “look at connections between folks in the U.S. and externally and foreign.” You just know it’ll be the Russkies again. CNN’s Don Lemon says if you voted for Trump, you’re with the Klan, the Nazis, and the Rioters. AOC demands Congress rein in the media environment, a happy euphemism for censorship. The endearing Rick Wilson writes, “Trumpists, here are your Terms of Surrender. Also, F*ck You.”

Will America see blacklists, purges of ideologically disloyal cops and soldiers, democratic elected officials canceled, impeached, shunned, or shamed? Hearings to see who in Congress now is or has ever been a QAnon retweeter? Though he namechecked domestic terrorism in his speech, Biden lacks the strength to do this himself. But the ability of a new Cheney or Rumsfeld to manipulate a weak president cannot be discounted lightly.

Or will it be four years (or less…) of Calvin Coolidge (Harding, Pierce, Fillmore) with Biden little more than a placeholder while both parties, free of Trump, reconfigure themselves? Biden might just reset the clocks to 2016 and be done with it. Maybe that’s the symbolism of the non-inauguration, with no crowd, and no sense of a torch being past.

Is it morning in America? Will we try and make America great again? Are we a nation of hope and change? Are we going to be called to bear any burden for liberty? The emptiness of the inauguration says not only do I not know, but I’m not sure Joe Biden does either.