The Real News We Ignore at Our Peril

This is the threat to our democracy, not Fake News. And Exhibit A is our failed war in Afghanistan. 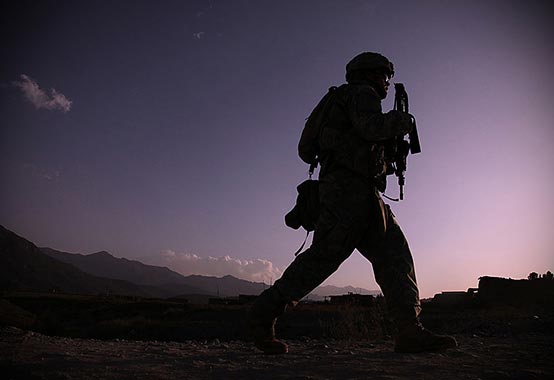 As defense secretary, Donald Rumsfeld used to entertain (and befuddle) reporters with his song-and-dance about Known Knowns, Known Unknowns, and Unknown Unknowns. This last category—“things we don’t know we don’t know,” as the inimitable Rummy put it—was the one that could really get you in trouble.

Allow me to posit a similar taxonomy for news. There’s Real News, based on fact and responsibly reported. Then there’s Fake News, made up of stuff propagated by disreputable outlets ranging from the National Enquirer and Breitbart to cable news networks and a bazillion websites. And finally there’s Real News That Gets Ignored. Once again, it’s that last category that will eventually land us in trouble.

A distinctive characteristic of the Trump era finds Fake News displacing Real News as the basis of what passes for our national conversation. This stems in part from the fact that Donald Trump himself obsessively denounces as fake any reporting he doesn’t like, with those in the news business repeating and thereby amplifying the president’s complaints no matter how bizarre or preposterous. But it’s also because Trump and his administration on a daily basis generate their own counter-narrative of news that they insist is genuine even though it’s manifestly bogus. The media landscape is thus awash in reports that one side or the other loudly condemns as fraudulent.

With all this emphasis on Fake News, the third category of our taxonomy has mushroomed. That is, the quantity of Real News that is underreported, shrugged off, or treated as an afterthought is increasing by leaps and bounds.

I was reminded of this the other day when the Office of the Special Inspector General for Afghanistan Reconstruction (SIGAR) released its latest update on how U.S. nation-building efforts in that country are faring.

This particular report focuses on a Defense Department-created entity called the Task Force for Business and Stability Operations (TFBSO), charged with overseeing U.S. taxpayer-funded economic development projects in Afghanistan. From 2010 to 2014, Congress appropriated approximately $823 million to fund TFBSO operations in Afghanistan. SIGAR now provides what is, in effect, a report card.

Among its key findings regarding TFBSO’s performance are these:

Now, SIGAR has been releasing reports about waste, fraud, and abuse in the Afghanistan War for years. TFBSO’s abysmal performance, now irrefutable, is just the tip of the iceberg.

Notably, all SIGAR reports, including this latest one, are readily available online. There is no need for reporters to cajole some unnamed source into spilling the beans or for editors to worry about courting trouble by publishing leaked classified material. It’s all there for the New York Times, Washington Post, PBS, NPR, etc., etc., to bring to the attention of the public. Yet these prestigious outlets never seem able to spare much attention for TFBSO’s troubles.

We should not be surprised. As it stumbles from one year to the next, the wayward U.S. project in Afghanistan receives sporadic media coverage at best. Even when some tidbit of awfulness attracts an occasional nod—when we learn, for example, that Afghan opium production has today reached yet another all-time high—the story ends up being a one-day affair, with no serious follow-up. Afghanistan, the longest war in American history, is a prime example of Real News That Gets Ignored.

There are many other examples. Staying in the arena of national security policy, other neglected stories include foreign arms sales (here the U.S. is truly the world’s number one), the global disposition of U.S. forces (now present in two-thirds of the world’s countries), cost overruns of major weapons programs, and the ongoing trillion-dollar modernization of the U.S. nuclear arsenal.

Let me emphasize: It’s not that you can’t find the odd reference to such matters, whether in your local newspaper or on TV. But compare the coverage such stories receive to the extravagant attention conferred on women graduating from the U.S. Army’s Ranger School or the service eligibility of transgendered persons. No doubt those are worthy topics. Yet at the end of the day they are unlikely to have anything more than marginal relevance to the safety and security of the United States.

The Real News That Gets Ignored poses a greater threat to the nation’s well-being than any of the Fake News in which we are presently drowning. And the fault is not Trump’s alone.