The Catholic Bonfire At The Stake Good morning from Dublin. It is really interesting to observe US public controversies from outside the American bubble. I am startled by the massive controversy that has erupted over the Covington (KY) Catholic school boys and the Native American man, Nathan Phillips, in the aftermath of the March For Life. Several video clips of the confrontation between an elder of the Omaha tribe and a large group of Catholic high school boys wearing MAGA hats have gone viral. Here’s a news story about the video, summing up the basics of the controversy.

A selected part of the clip shows boys jumping and hooting and acting in a somewhat intimidating way towards the older man, as if to mock him. Some people interpret the boy standing in front of the man, the kid with a rictus grin, as sneering at the old man. Others say that you can’t assume that was a sneer; maybe the kid just didn’t know what to do.

In any case, the Catholic school has apologized for its students’ action, and the mayor of their hometown has denounced them. The boys were in town for the March For Life. The video is being widely cited as an example of the Trumpification of Christianity, and connected to the Karen Pence school controversy as yet another example of why conservative Christianity is an evil that must be driven from the precincts of the decent.

It is possible that the Catholic boys were complete asses. My initial judgment was that they certainly were that. You don’t treat a peaceful elderly person like this. Even if they thought he was wrong, those boys owed him respect. Yes, the old man approached them, but they could and should have handled him with respect. They come off as bullies.

But then I watched more clips, showing the greater context of the incident. It is not as simple as it has been portrayed. Below is a more complete video account of what happened. In it, one of the Catholic boys is overheard asking, “Does anybody know what he’s doing? Does anybody know what’s going on here.”

And, in it, one of the Indians with Phillips shouts: “White people, go back to Europe. This is not your land.” He curses the students with f-bombs (video is NSFW). He goes on: “You’re being a white man about it. That’s all you know how to do.”

You didn’t see that in the news reporting, did you?

Then, at the 4:40 mark, members of an insane black radical cult called the Black Hebrews (I remember them from my DC days) starts ranting at the boys about whites and sodomy, and says that “your president is a homosexual.” He makes fun of Christian civilization, saying: “You give faggots rights!”

Watch it all here:

The online mob is starting to doxx those Catholic boys. One of them sent this to a local news channel (forgive my formatting problem; just read the text): 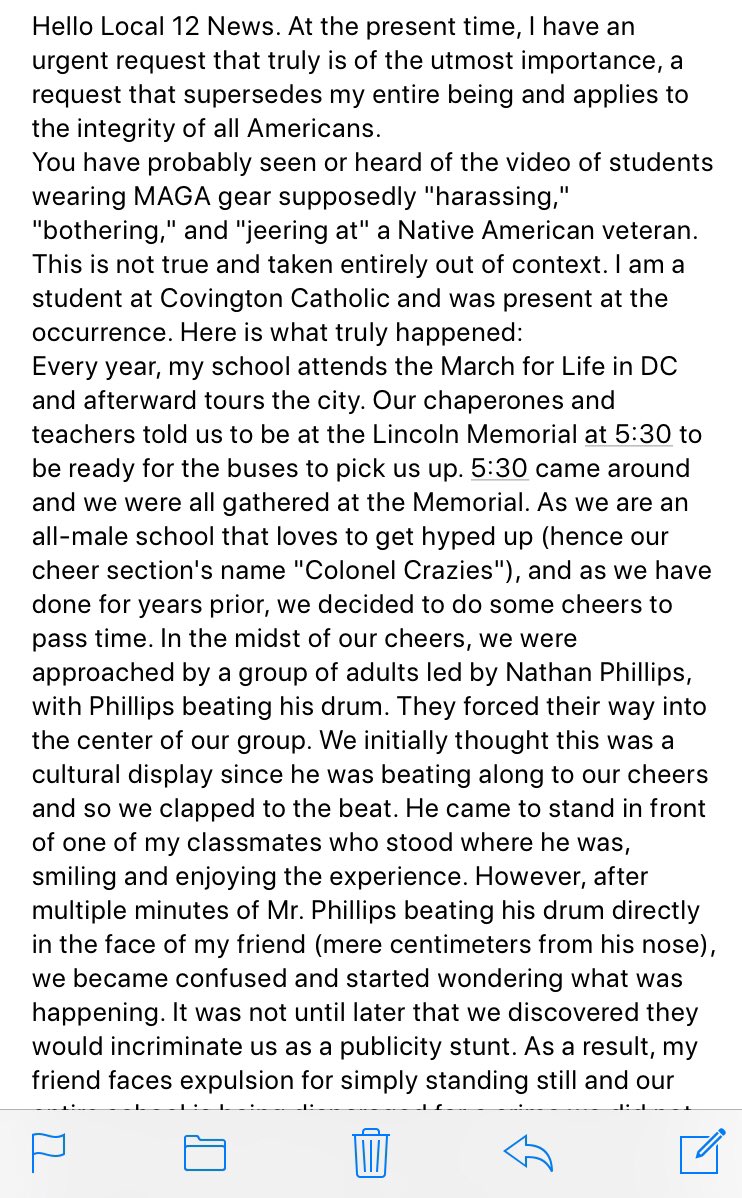 The video I posted above supports this version of events. The ones that have gone viral, and which first brought this incident to my attention, do not.

Last night before bed, having only seen those shorter videos, I retweeted a condemnation of these boys. Now I regret that, having seen the whole video, and observing how left-wing activists — some of them Christian — are seizing on this ugly incident to discredit the March For Life, a massive annual event protesting the murder of the unborn.

To be clear, it is POSSIBLE that these boys really did make fun of this old Native American man. If that’s what happened, they should apologize.

I don’t think this is what happened at all, though. These boys were already chanting their high school chants. Nathan Phillips confronted them. They don’t appear to understand what point he was making with his own chanting and drum-beating. And now they are held up to the contempt of the country for something they appear not to have done at all. And, the news accounts conveniently ignore the provocative, racist, foul-mouthed attacks on the boys by one of Phillips’s Native American companions.

Here’s something else: in 2015, this same Native American elder, Phillips, confronted college students wearing Indian garb at a college party, and claimed he was treated disrespectfully by them. So he said; no video exists. It appears that he was looking for a confrontation of some sort. If those college boys behaved that way, it was indeed wrong, and offensive. But Nathan Philips seems like a man who seeks out these opportunities for confrontation, and then to go to the media with them. Notice in the clip that went viral, Philips had a man with a camera following him as he approached the MAGA boys.

The media are creating a narrative. Back in 1993, I covered the massive gay March On Washington. It was a highly diverse gathering, with lots of ordinary, man (or woman) next door types. There were also plenty of freaks. My personal favorite was the man who walked by wearing nothing but a vestment of leaves, with a branch coming out of his butt. He was part of a group called the Radical Faeries. The mainstream media coverage of the march focused almost 100 percent on the middle-class Normies, and left the freaks — the sadomasochists, the Radical Faeries, the topless obese lesbians, and so forth — out of the coverage. As a young journalist who had actually been on the ground there, this was an important direct lesson in how the media shape the narrative.

It’s one thing to know abstractly that the media do this, but quite another to watch it happen in real time, with an event you were part of. The Normie narrative was highly useful to the cause of mainstreaming gay rights, and bringing about gay marriage. The freaks would have hurt that cause. Therefore, they were edited out of the story.

Similarly, in this case, the white Catholic boys in their MAGA hats appearing to intimidate a Native American elder serves as a useful club with which to beat the entire March For Life, as well as conservative Christianity in general. I’m not saying that it wasn’t news, or shouldn’t have been reported. But tell the whole story. Tell how Phillips instigated this thing, and how the boys appear not to have understood what was happening. Tell how Phillips’s companion cursed them and hurled a racial slander at them. Talk about the Black Hebrews.

Tell the whole story, not just the part that is useful to a left-wing narrative.

This is the worst thing about this DC incident. This tweeter is an Academy Award-nominated screenwriter and producer:

Plus side: A face like that never changes. This image will define his life. No one need ever forgive him. pic.twitter.com/0jrnQ3hQu1

That is utterly monstrous. This kid, wrong as he might have been [Note: I don’t believe he was wrong! I’m just saying that *if* he was wrong), is a high school boy. He might repent. Who knows what he might do with his life? He’s a kid! “No one need ever forgive him” — my God, what a contemptible statement from anyone, about anything, most especially an adult about a teenager.

Note very well that Michael Green is a man of significant power. He tells stories on film for mass audiences. This is his attitude: to demonize for eternity teenagers — teenagers! — who may have made embarrassing, politically charged mistakes in public. This is the kind of person who is in charge of telling stories to Americans about America. Because of the great power he has to shape a culture’s morals and memories, what Michael Green is saying here is more evil and dangerous than anything a bunch of hooting knothead teenage boys did in Washington.

No forgiveness and no mercy for enemies of the people. This is what it means to be a Social Justice Warrior, even if you happen to be a rich Hollywood screenwriter and producer. This is what people on the right are up against. This is why so many older people who grew up under communism and who now live in the West tell me that conditions here are starting to remind them of their youth under communism. It’s the way the media and others in the left-wing mob will flat-out lie about their political opponents, in an attempt to destroy them personally and professionally. That unnamed boy in the iconic image, staring with the rictus grin at Nathan Phillips, is now an Enemy Of The People, even though there is no evidence at all that he did anything wrong. Truth doesn’t matter; truth is what serves the Cause.

From what I can tell from over here, what is being reported about the Covington Catholic boys appears to be almost 100 percent Fake News. I started out ready to condemn those boys, but after watching more videos of the entire incident, I changed my mind. I am willing to revise this opinion if more facts come forward, and I welcome your e-mailing them to me.