Stepping into the 6.6 million square foot building is a return to the 1950s--a lot like our national security strategy. 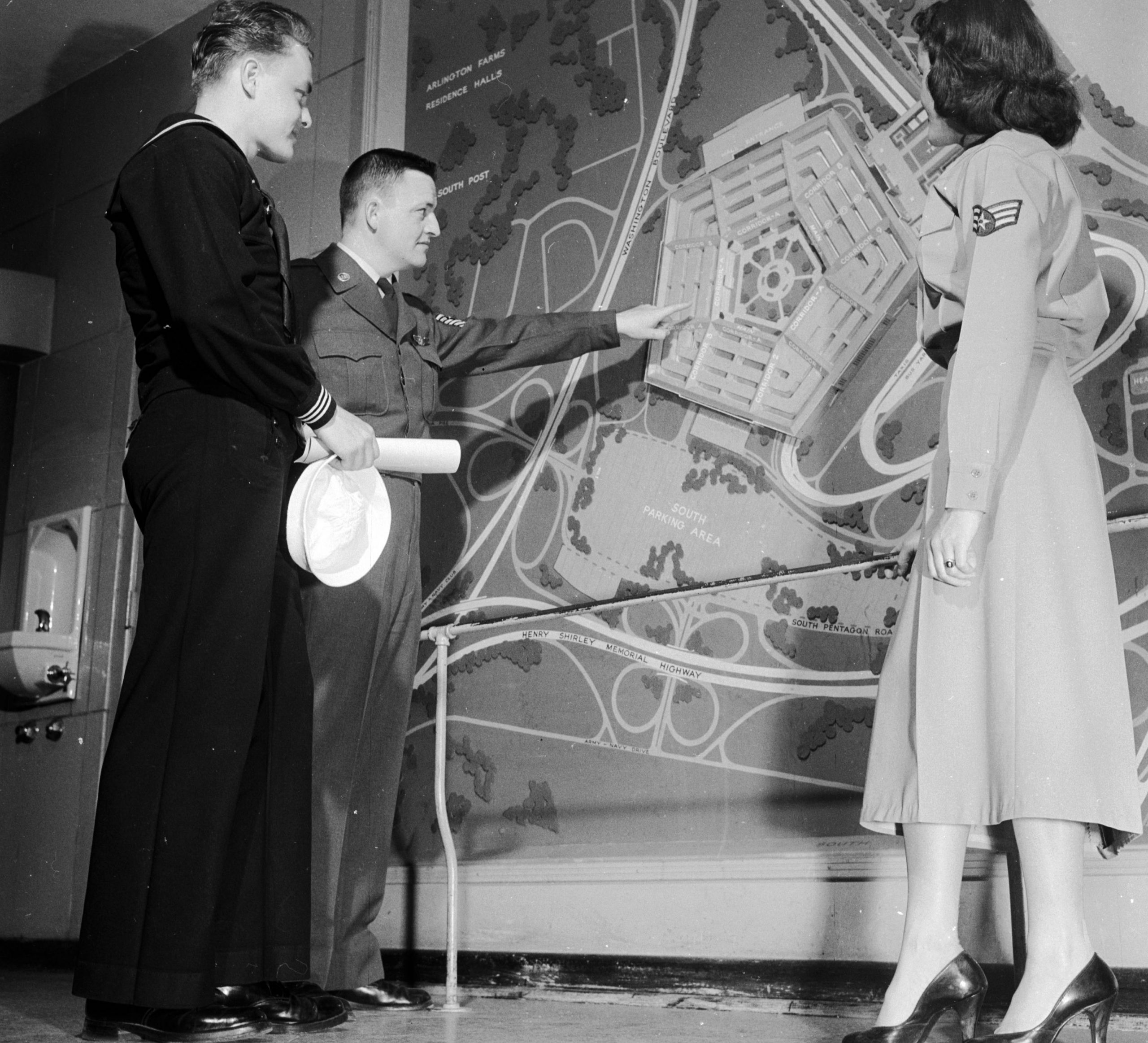 The Pentagon building just over the river from Washington D.C. is really an architectural marvel, and if there was any federal office space that reflected the true nature of its purpose, this 6.6 million square foot labyrinth, made up of concentric rings spanning over 7 miles, housing 3.6 million square feet of offices with nearly 30,000 employees coming in and out everyday like bees to the hive, this is it. Like the institution it represents, it is a planet onto itself—with six zip codes, Metro station, a shopping mall, food courts and gyms. It is connected underground to adjacent Pentagon City, which offers access to off-site housing and not surprisingly, satellite HQs of the world’s top defense contractors. Lockheed Martin, BAE Systems, Boeing, General Dynamics and Raytheon all have digs here, along with a host of other mid-range beltway bandits.

Looking across the Potomac you can make out the U.S. Capitol and from a certain vantage, the White House, rounding out the primary points of Military Industrial Complex in the Imperial City. On the western side of the Pentagon is the sprawling Arlington National Cemetery, the final resting place of so many who served this national security state: at least 400,000 active duty service members, veterans, and their family members are buried here today.

But back to the Pentagon. For the literal nucleus of the most powerful military in the world, it is, according to its own denizens, like walking into a time warp. Think Kirk Douglas in black-n-white Seven Days in May, as he crisply enters the wing for the Joint Chiefs of Staff. So says retired Marine John Kroger, who was chief learning officer of the Navy and Marine Corps in the building from 2019 to 2020, in a recent Wired article:

There are no laptops at meetings in the Pentagon. There are no whiteboards, either. No connectivity, and almost no diversity. I love the Navy and Marine Corps, but as a civilian executive, this 1950s environment is what exasperated me most about working there. These problems damage the speed and quality of our military planning and decision­making. If we don’t correct them soon, we will jeopardize our national security.

One of the biggest complaints is there is very little cell phone service in the building, which, aside from the super long underground stretch to Pentagon City, is pretty isolated. There is a strict ban on mobile devices in classified areas, but apparently most can’t get a signal where the phones are allowed. He goes on:

During the pandemic, I’ve had much greater connectivity working at home on my civilian network than I did when in the building that controls the most powerful and technologically advanced armed force in the world.

At the Pentagon, I couldn’t place calls or check email unless I was physically in my office. This was often impossible, as I had many meetings in far-flung parts of the building. So I was generally not connected continuously to colleagues during the day, and had to catch up on messages after hours. This is true for virtually everyone in the building. Work flows at a glacial pace. If there was an emergency, my staff couldn’t notify me unless I was in my office. We didn’t even have pagers, so if something needed immediate attention, a staff member who monitored my phone and email had to come locate me among the Pentagon’s 6.5 million square feet.

Kroger says “we need to shift our focus from military hardware to networks.”

In the Navy, this emphasis on the “toys,” and not the networks that make them run, has left us with an obsolete and highly unreliable master network and over 140 subsidiary legacy networks, most of which are independent and cannot connect or talk to one another. This IT quagmire puts national security at risk in an age in which all of our communications, navigation, and weapons systems rely on fast, reliable and secure networking… This shift will require a massive effort to expand IT capabilities.

Kroger, I imagine, is being purposefully gentle on his former employer. He knows quite well, as he linked the story, that the Pentagon just inked a $7.7 billion contract  to clean up the previous contract for the massive intranet, and the contract before that, and the contract before that. For as long as I have been reporting in Washington since 9/11 there have been at least two or three giant defense IT projects in the works that are supposed to revolutionize global connectivity across “the enterprise networks.” After nearly 20 years, we still have concerns that our personnel and assets cannot effectively, safely, talk to each other? The Pentagon just handed over a $10 billion to contract to Microsoft to put everything in the cloud. Good luck with that.

But irritating cell service is just the start of this throwback environment, says Kroger. The real problem is the way the military conducts its daily business, which seems, from everything I’ve heard from officers who’ve worked there, to be all about structured meetings, stove pipes, deference and protocol, leaving little time for reflection, creativity, or real brainstorming for strategy.

Meetings, “briefings” in Pentagon parlance, are also a case study in inefficiency. Like clockwork, the briefing team presents, and the senior leader in the room listens and asks questions. The rest of the staff remain silent. Instead of interjecting their own questions or raising alternative points of view, they’re encouraged to “stay in their own lane.” The purpose of many of these meetings is not to make a decision, but to “update leaders on progress.” There are no whiteboards, no thinking out loud, and usually no analysis. Almost everything is scripted.

Kroger goes on to describe the dreaded Power Point presentations, “which some observers have described as a cancer eating away at the US military.”

By relying on stale slides, we focus on small numbers of carefully selected data points, simple assertions, and bullet-point plans. Nuance and complexity dissolve. Since our conference rooms too have no connectivity, no one brings a computer. Slide decks are not viewed on screens but printed on paper and distributed by hand, with people taking notes with pens and pencils. No one can pull up data to question the assumptions, facts, or conclusions being presented. Everyone is stuck discussing the information the briefers brought to the table, whether it is accurate or not.

As we know, many of those slides with their data presentations—accurate or not—have in the last 20 years been about the progress of our war strategy in Afghanistan and Iraq. We are aware how bad news was twisted and glossed over for these presentations so that no one officer or command stood out as having to take blame or be the messenger. A conspiracy of Power Point that helped turn our policies into ashes but left everyone’s hands and starched white and khaki pants clean.

West Point law professor Tim Bakken told TAC and our Empire Has No Clothes podcast that this culture is ingrained from the very beginning, in the service academies and graduate level war colleges, in boot camp, and in military life on the bases. By the time officers get to the Pentagon, they know the only way to get to the vaunted E Ring—the only outward facing suites with natural light—is to master the behavior that Kroger just described. The inability for this institution to get out of the time warp technologically is not only due to its sheer size, but the lost grasp of imagination and innovation, elevating the wrong people for the job, time and time again.