Who’s the Most Hawkish 2016 Candidate? YouGov recently released the findings of a survey on the public’s foreign policy views. One question they asked was whether Republican voters perceived their candidates as hawks or doves, and this is what they found: 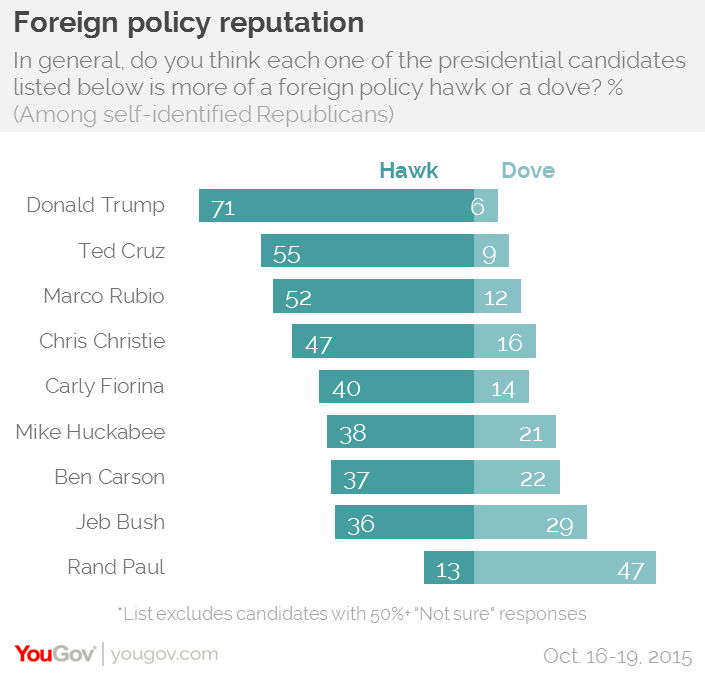 The results for Trump and Bush in particular seem at odds with their statements and policy positions (to the extent that Trump can be said to have any of the latter). Trump has criticized the idea of “going to WWIII” over Syria, while Bush has been in lockstep with other hawks in supporting a “no-fly zone” there. Even though Trump has claimed to be the “most militaristic person,” he seems less inclined to use force than many of the other candidates that are perceived as less hawkish than he is. For his part, Bush has repeatedly recited revisionist nonsense in defense of the Iraq war such that no one could seriously mistake him for a dove. However, most respondents don’t seem to know that, and they are instead judging the candidates based on something else.

The best way to make sense of these results is to take them as a more accurate gauge of the candidates’ perceived combativeness. Trump may not be as interventionist as Bush, Cruz, Rubio, et al., but he emphasizes his desire to “win” contests against other nations and how the U.S. will “beat” others when he is president. Cruz is technically less of an interventionist than Rubio or Fiorina, but he is famous for his doomed, pointless fights with Senate leadership. If we assume that “hawk” here is simply code for being combative, it makes sense that they would be perceived as more hawkish than their opponents despite being marginally less so on policy.

As Matt Lewis noticed, Trump summed up his foreign policy with just one word: strength. That is practically a caricature of a Republican hawk’s answer, and good luck trying to figure what it would entail in practice, but I suspect it is this very vagueness that allows Trump to sound far more hawkish than he is. It’s a simplistic and fairly vacuous answer to the question, but it seems to allow him to make other criticisms of the Bush-era GOP consensus that other candidates can’t or won’t make.