The contrast between the caucuses and Trump's State of the Union was sharp. 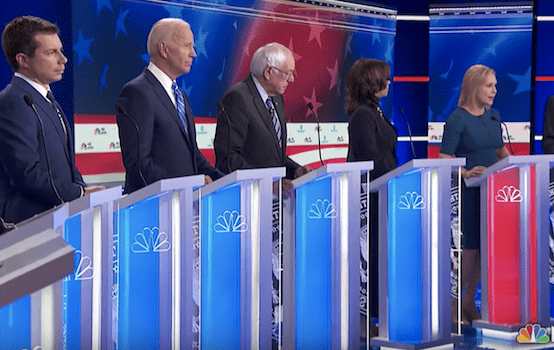 President Donald Trump took a victory lap as the Iowa Democratic caucuses melted down. An “unmitigated disaster,” he tweeted. He noted his own victory—with more than 97 percent of the vote—on the Republican side and brought up a bad memory for Democrats: “Remember the 5 Billion Dollar Obamacare Website.”

It was a cheap shot, of course. None of his rivals’ campaigns were responsible for the Iowa Democrats’ app mishap. But Trump was right to be gleeful. A party that aspires to run a larger share of the U.S. economy has shown itself ill-equipped to perform more mundane tasks. Worse, the Democrats had made themselves look small even in comparison with this unconventional, often petty, president of the United States.

The results don’t look much better twenty-four hours later. As Trump delivered a solid State of the Union address, far more dignified than his post-Iowa tweets, his would-be Democratic challengers were squabbling over the incomplete caucus tallies. Alexandra Ocasio-Cortez was touting her moral seriousness on Instagram. Trump is on the cusp of Senate acquittal, beating back a second attempt to oust him (the Russia investigation was the first) and watching his job approval rating climb ten points in the Gallup poll since the impeachment inquiry started.

Trump won the 2016 Republican presidential nomination in part because, hand jokes aside, he looked bigger than the rest of the 16-person GOP field. For good and for ill, he continued to grab all the headlines one-on-one against Hillary Clinton. This time he will face someone who emerges from a group of Democrats who have yet to distinguish themselves, with the news cycle having moved on before an Iowa victor is even declared. It is similar to 1988, when the Democratic presidential aspirants were dismissed as the “seven dwarfs.”

By the time any of this matters, Iowa will be a distant memory. The Democrats’ Des Moines problems will look no worse than the GOP’s Mitt Romney/Rick Santorum confusion in 2012 or Trump’s own complaints that Ted Cruz cheated his way to first place in Iowa four years ago. And with Trump’s enduring unpopularity among vast swathes of the American electorate, no Democrat running this year can be written off entirely (though he did have a 60 percent unfavorable rating the day he was elected).

Still, the centrist-progressive split on display in Iowa shows little sign of abating. After a long, drawn out primary process, or possibly even a contested convention in Milwaukee, Trump may not be the unifying force among Democrats he proved to be in the midterm elections. If Bernie Sanders is denied the nomination, his supporters will once again feel cheated by the establishment and may stay home—or vote against the Democratic standard-bearer.

The “Bernie bros” clearly get under the mainline Democrats’ skin. Perhaps Never Bernie would be no more effective than Never Trump, but you have to wonder. Trump took his first overt shots at the Democrats in the State of the Union when he argued socialism will destroy American health care and send taxpayer funds to support illegal immigrants instead. “It feels good to vote for the candidate you admire most,” writes Slate’s Will Saletan. “But if Sanders wins the nomination and Trump wins the election, you’ll have four more years to feel the burn.”

Pete Buttigieg, a possible destination for establishment Democrats if they choose to abandon Iowa’s fourth-place finisher Joe Biden, is bitterly despised by online progressives. They may not be numerous enough to matter, but African-American voters surely are. Buttigieg’s standing in the black community is abysmal. Many will come around if he is the Democratic nominee, but there are legitimate questions about turnout among this key voting bloc.

Trump has his share of vulnerabilities, not least the possibility voters will decide they don’t want to live through four more years of tweets and turbulence. But the contrast between the State of the Union and Iowa reminds us that the Oval Office makes even its most polarizing occupants look bigger. Campaigns can make their participants look small.