A reader who is an Evangelical Millennial, and who has spent a good bit of time in youth ministry, read my interview today with John Stonestreet of the Colson Center, in which Stonestreet talked about preparing the next generation to live faithfully. The reader responded thus:

The two assumptions I’ve consistently seen among evangelicals my age (18 – 25) about the subject are:

1) Marriage is an optional lifestyle choice, and the primary risk young Christians face with respect to marriage is putting too much of a premium on pursuing it and making it into an “idol.” (The latter part has especially be reinforced by church ministry leaders.)

2) Children aren’t an essential part of marriage, but also an optional lifestyle choice, and anyone who says that a married couple has an obligation to either have children or, if infertile, make their marriage fruitful through things like ministry, adoption, etc., is a crank. Marriage is primarily about the relationship between the married couple.

In summary, the viewpoint is essentially that marriage is like buying a nice house – not a bad thing to do if you feel so inclined, but certainly not something that most people need to do. Children are even more of an optional commodity. I think most of my friends who are getting married now do want kids at some point, but the attitude is very much one of children not being part-and-parcel with marriage so much as an elective that a couple can choose to take on if they’re feeling traditional.

The problem with all of this, of course, is that the truly pressing problem with young evangelicals and marriage is not that they’re “making an idol out of it,” but that so many of them are getting married progressively later like the world at large, and putting off having children, if they have them at all. The problem is that in the United States, only a small percentage of what keeps evangelical Christianity going is an inflow of new converts from other religions. A huge percentage of it (unscientifically, I’d guess easily > 85%) comes from the faith being handed down to the next generation. And with the current generation of evangelicals already drifting from their doctrinal moorings, the need for my generation to have substantial numbers of children who are actually well-catechized is all the more critical. In fact, the problem is almost the reverse of what the marriage as an idol types claim: it’s that there really is an urgent need for young evangelicals to start having children (and lots of them), or they’re going to get wiped off the map demographically – and I don’t see that happening in anything like the numbers needful. I suspect a lot of the reason why traces back to the two assumptions I identified above.

I agree about the need for well-catechized Evangelical youth, and emphasize that sociologist Christian Smith have found that Evangelicals generally do a better job of this than Mainline Protestants and Roman Catholics do, but the numbers are still ghastly. In terms of the reader’s claim about inflow and outflow into Evangelicalism, the Pew Center has found that Evangelicals are holding their own amid the overall decline of Christianity in the US: 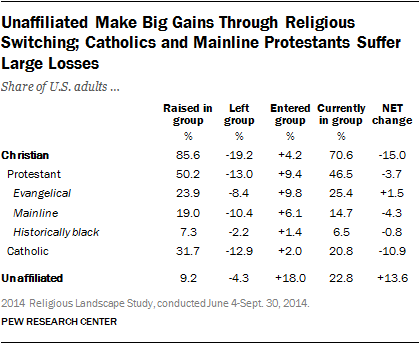 But don’t be fooled. As I write in The Benedict Option:

In her 2013 book How The West Really Lost God, cultural critic Mary Eberstadt argues that religion is like a language: you can learn it only in community, starting with the community of the family. When both the family and the community become fragmented and fail, the transmission of religion to the next generation becomes far more difficult. All it takes is the failure of a single generation to hand down a tradition for that tradition to disappear from the life of a family and, in turn, of a community. Eberstadt is one of a long line of religious thinkers to recognize that when concrete embodiments of the relationship to God crumble, it becomes very hard to hold on to Him in the abstract.

I strongly recommended buying Eberstadt’s book. Here’s an interview with her about her thesis. Excerpts:

CWR: Your argument is essentially that faith and family make a double-helix and that traditional theories of secularization in which religious decline leads to the deterioration of the family are neglecting large pieces of the puzzle. Can you expand on this?

Let’s start with some uncontroversial facts that point toward just such a relationship. Married people are more likely to go to church than single people. Married people with children are significantly more likely to do so, especially if they’re men. Similarly, social science documents that across the world, the more religious you are, the more likely you are to have families of size; fertility and religiosity are tightly linked, any way the numbers are run.

The point is to ask why these things are so. It’s not satisfactory to answer by saying “well, that’s just what religious believers do.”

One new way of looking at these relationships is to see that there is something about living in families that inclines at least some people toward religiosity in general, and toward Christianity in particular. This fact is a hidden engine of both secularization in some circumstances, and religious revival in others.

CWR: You argue that families—particularly the experience of bringing children into this world—makes individuals more receptive to religion, and specifically Christianity. How so?

Eberstadt: There are many ways in which families “drive people to church,” and one particular chapter in the book tries to bring some of them to light.

For one thing, childrearing is an enormous responsibility. So many mothers and fathers seek to situate their children in a like-minded moral community—i.e., church. That’s one quotidian but real and forceful way in which something about just having children motivates some people toward the pews.

Then there are the more ephemeral but also powerful ways in which family life raises the idea of God. The experience of childbirth, for starters, rather obviously inclines some fathers and mothers—maybe even many—toward a transcendent frame of mind that gets translated into religiosity.

We modern people have less familial experience than those who came before us. We have institutional substitutes for the family from cradle to grave, daycare to nursing homes.

That’s part of why Western society is less religious than it used to be, I believe—because if it’s hard to be an atheist in a foxhole, it’s also hard to be one in the nursery, say, or when contemplating an open grave. The fact that so many Western people are alienated in different ways from these primal experiences is part of what’s going on in so-called secularization.

John Hirschauer September 30, 2022
In Amoris laetitia, Francis said “there are absolutely no grounds for considering homosexual unions to be in any way similar or even remotely analogous…

No NATO for Zelensky’s Ukraine

Bradley Devlin September 30, 2022
If the West caves to Zelensky’s demands, this winter could go from cold to nuclear.