Éric Zemmour and the Algerian Question

The right-wing French presidential candidate is more than just nostalgic for France’s 132-year presence in Algeria. 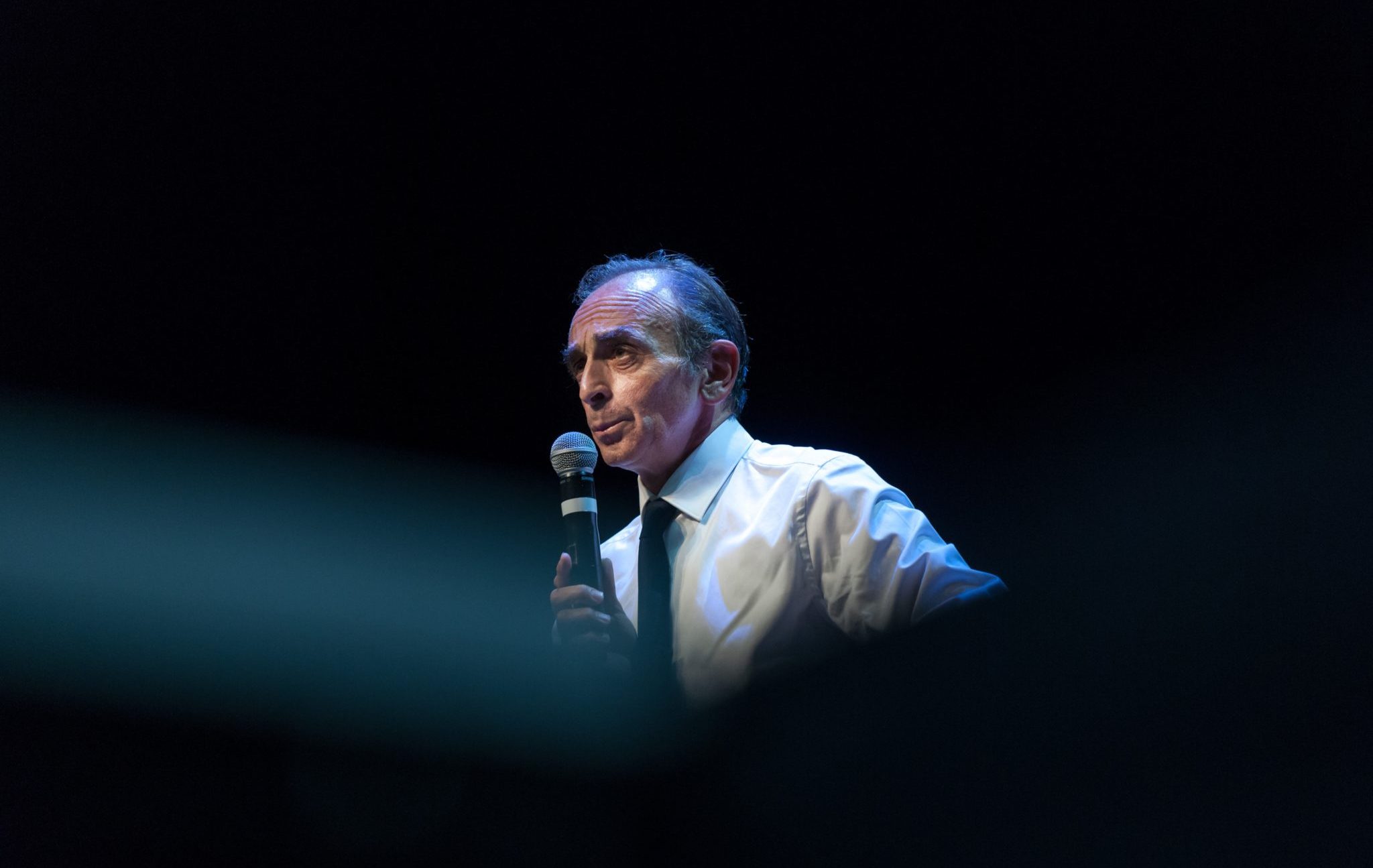 “I have been twice colonized,” intoned Éric Justin Léon Zemmour at a book launch for his 2018 bestseller French Destiny, hosted by Les Éveilleurs, a conservative media network. “First, by the conquering Arabs, then by France…My ancestors took refuge up in the mountains to avoid being forcibly converted to Islam,” he went on to say of his Berber roots, potentially tracing his ancestry back to the Maghreb’s pre-Islamic age. France, instead, “gave me liberty and emancipation,” he had loftily proclaimed in an earlier interview to iTélé from April 2014. “I am the blessed fruit of colonization.” At this stage of France’s presidential campaign, Zemmour’s background as an Algerian Jew of Berber stock should be widely known. But is it really?

Contrary to an oft-peddled inaccuracy, Zemmour’s parents immigrated to France not during the war of Algeria (1954-1962) but two years before it broke out, in 1952. Roger Haïm Zemmour, his draconianly strict father—“his belt always laid on the table, ready to be whipped”—had been a pharmacist, then an ambulance driver, then started out his own ambulance business, embodying the French middle class’ ethos of upward mobility through sheer effort and assimilation into the cultural mainstream. Though Roger’s long hours limited the time the two could spend together, his son likely inherited his passion for French letters from him. Women, on the contrary, were a constant presence in Zemmour’s life, especially his stay-at-home mother Lucette Levy. “They made a man of me,” he once said, “and revealed to me my feminine side.” The couple had married in Sétif, on Algeria’s northeastern coast, near the larger city of Constantine. Out of the region—unlike the Moroccan and Tunisian protectorates, Algeria had been fully French territory since 1830—Sétif at the time had the largest Muslim share of the population, no less than 85 percent, which means the Zemmour family likely lived in a very tight-knit community of pieds-noirs, the popular name for European and otherwise non-Arab settlers of Algeria.

In the wake of World War II, the Zemmours’ home city of Sétif had descended into a degree of violence that forebode the conflict to come nine years later. On Allied victory day, as demonstrations erupted across the city showcasing the then nascent pro-independence movement’s strength, a young boy waving an Algerian flag was accidentally shot by police. The celebrations soon morphed into mob violence against the city’s pieds-noirs, slaying a total of 130. The counter-mob retaliation was even bloodier, with French police killing anywhere between 5,000 and 45,000 Arabs, depending on whom you ask. This out-of-proportion wave of repression markedly radicalized the nationalists and grew their numbers, so much so that some historians to this day date the start of hostilities not to the creation of the Armé de Libération Nationale (ALN) in October 1954 but to the day of the Sétif massacre, the May 8, 1945. Moving to mainland France seven years later, Zemmour’s parents surely took with them—and may even have passed on to their two sons, Éric and Jean-Luc—a lurid memory of the escalating tension between pro-French settlers and Arab locals.

Though the French and Algerian states still find much to disagree about regarding the war’s evolution, few historians characterize the conflict as anything short of abominable—A Savage War of Peace, per the title of Alistair Horne’s bestselling 1977 history of the conflict. The violence pushed one million pieds-noirs into French exile, killed as many Algerian Arabs, led to the dissolution of six French governments and ushered the transition to a new republic, recalling Charles de Gaulle from his retreat only to nearly send him packing too. Over the past decade or so, a growing segment of the French political establishment and most historians have moved to recognize the French army’s atrocities committed during the war—the torture, the extrajudicial killings, the siege laid to entire villages suspected of harboring fighters from the notoriously murderous Front de Libération Nationale (FLN).

For Éric Zemmour, journalist-turned-presidential-candidate, this coming to terms with the dark side of France’s role in Algeria erases the plentiful positive legacies of its 132-year-old colonial presence—the hospitals, the highways, the cities, and the fossil fuels. More crucially, it amounts to self-flagellation, an ill-conceived act of “repentance” that will only perversely reaffirm the victimary basis on which the independent Algerian state has built its legitimacy, to the detriment of Algerians trapped in a degree of poverty that has little to do with either war or colonization. In a visit to Algiers during the 2017 presidential campaign, Emmanuel Macron described France’s colonization of Algeria as a “crime against humanity”—for Zemmour, this is a statement unbecoming of a candidate aspiring to the land’s highest office.

In the aforementioned interview to Les Éveilleurs, Zemmour noted the familiarity between Macron’s phrase and the neologism “genocide,” something he argues cannot have taken place in Algeria since the 2 million locals living there at the time of France’s conquest in 1830 had ballooned to 12 million by independence and rose further still to 40 million today—“if it was a genocide,” he quipped, “it was a thoroughly failed one.” Later that year, then President Macron officially recognized the French state’s responsibility in the disappearance and murder of Maurice Audin, a pied-noir mathematician and militant of the Algerian Communist Party (PCA) killed during the 1957 Battle of Algiers, a spike of violence in the country’s capital that saw the French army regain control of the streets through sheer repression. Zemmour, then a pundit at the RTL radio network, took to the airwaves shortly after to proclaim that “France had done nothing wrong.” The year 1956, he noted, saw 122 terror attacks against the pied-noir community. The army had been entrusted with police powers by a left-wing majority of the National Assembly with a mission to restore order, which they did. Audin’s membership in the PCA put him in bed with the FLN’s terrorists massacring French civilians, Zemmour argued, so France was contextually right to kill him. Only through brute anti-terrorism could terrorism be rooted out.

This no-fault, guilt-free view of France’s role in Algeria extends to colonization at large. In October 2019, Zemmour declared himself “on the side of General Bugeaud,” whom then king Charles X called upon to suppress a local revolt in 1830 and who, “upon arriving in Algeria, began massacring Muslims and even some Jews.” CNews, the network where he’d spoken, was swiftly issued a warning by France’s TV and radio regulating authority owing to the statement’s “potential to stoke hatred.” The day after, Zemmour stood by his words and recalled the larger point they had been uttered to prove. “To be accepted in France, one must appropriate its history, including if one belongs to a people colonized,” he said in self-laudatory reference to his passion for French history.

Zemmour’s writings also frame colonization as a fundamentally win-win, civilizing enterprise. France’s original motive for moving into Algeria, he explained in Destin Français (2018), was to free the Mediterranean of the pesky pirates who had settled on its coasts. “Algeria has always been a colony, and it certainly wasn’t a nation before France colonized it,” he has repeated several times since. “We were merely picking up the torch passed successively by the Romans, the Vandals, the Muslims and the Ottomans.”

Of all its colonizers, only France saw to it that the region flourished, according to Zemmour. “Algeria, before France, was a sewer. After centuries of Ottoman colonization, misery and illness festered. France nurtured the place, developed it. Today, they live off the oil that France discovered.” The colonizing French were playing a longer-term game, too. “Algeria will be our America,” Zemmour quoted the 19th-century French journalist Lucien-Anatole Prévost-Paradol as saying. The French elite had understood, he explained to Les Éveilleurs, that geopolitical competition was becoming in large part a demographic contest, with the British empire, a rising America and a soon-to-be-reunified Germany all vying for numbers.

By the second half of the 20th century, however, France’s mission civilisatrice had been losing momentum. In 1958, Zemmour’s birth year midway through the war, the country’s role in Algeria had become “inextricable,” he wrote in Destin Français. Four years later, then President Charles de Gaulle would decree a withdrawal that most of the 1 million pieds-noirs forced to resettle would decry as a betrayal. Alain Peyrefitte, de Gaulle’s foreign minister at the time, recounts in his memoirs one famous remark the general made to him. “I don’t want Colombey-les-deux-Églises,” he said, in reference to his home village in central-eastern France, “to turn into Colombey-les-deux-Mosquées,” a wordplay hinting at the tens of thousands of Muslim immigrants whom de Gaulle arguably feared would come settle in France and build mosques to replace decaying churches.

But acknowledging defeat and pulling out of Algeria in 1962 did nothing to stop mass immigration, Zemmour argues. On the contrary, the special status afforded to Algerians on account of past colonization would see them emigrate in such large numbers that president Abdelmadjid Tebboune himself reckoned as many as 6 million live in France today, many illegally. Immigration is precisely part of the reason why the two countries remain as far as ever, despite every president since de Gaulle expressing interest, from official reconciliation in the way of the Franco-German Élysée treaty of 1963. Algeria to this day refuses to take in the illegals and otherwise wrongdoing immigrants that France wishes to expel, something Zemmour has pledged he will bend the country into doing if elected president by reducing the visas France allots, among other means of diplomatic pressure. But the deeper reason for the rift remains the still painful and divergent memories of the war. In October this year, Macron set off a diplomatic feud whilst on official visit to Algiers by accusing its government of “memorial rent-seeking,” a phrase Zemmour has used several times before. By shifting the blame for all of its problems to France, Zemmour and Macron seem to agree, Algeria’s corrupt, oil-enriched elite eludes its responsibility to tackle poverty and underdevelopment.

For Zemmour, Algeria is not merely part of his family lore and a marginal sore point souring the diplomatic relations of the country he wishes to govern come 2022. More importantly, Algeria invites itself into France’s domestic life, rippling across its fractured society. “The conflict with Algeria,” he told Les Éveilleurs, “inserts itself in a millenary-old rivalry between Christianity and Islam, a war of civilizations that has since awoken in our own territory.” Indeed, “we are living the second episode of the war of Algeria, with Islam seeking to impose itself in the banlieues,” he said of the immigrant-dense, poorly-housed outskirts of France’s major cities. If elected, Zemmour will become France’s first pied-noir president, a powerful symbol in itself. But more crucially, he will reverse the country’s apologetic pronouncements of the last half-decade, taking France squarely back to a posture of boastful pride for having carried the civilized man’s burden.