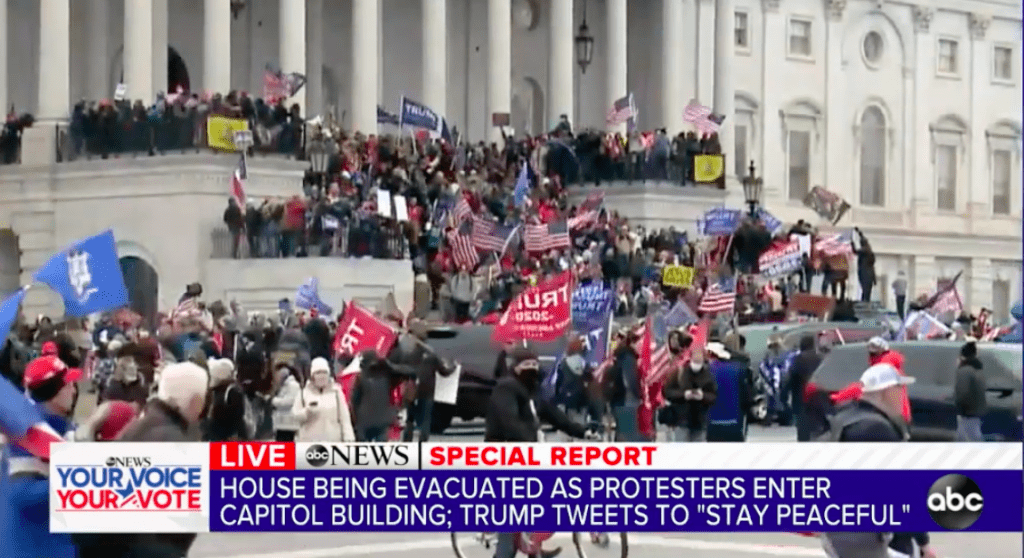 My God, this is what Donald Trump has done to this country: he has incited a mob to storm the US Capitol. Just saw a shocked Terry Moran on ABC saying that he has seen mobs take over foreign government buildings, but he has never seen anything like that in America. The MAGA mob attacked Capitol Police officers and stormed their way into the building.

MAGA mobsters have broken in with backpacks. Who knows what’s in them? Guns? They breached the metal detectors, and overwhelmed it all. Nobody has any idea if there are people with guns roaming the halls of Congress. We do not know. This has never happened in America. Trump goosed his own mob of supporters in DC this morning, saying in a speech:

“All of us here today do not want to see our election victory stolen by emboldened radical Democrats. We will never give up. We will never concede. It will never happen. You don’t concede when there’s death involved. Our country has had enough. We will not take it anymore.”

He said: “We will never take back our country with weakness.”

And then they went in and invaded the Capitol. Elected representatives are barricaded into their offices. The Vice President had to be evacuated from the chamber, at the same time that Trump was tweeting out that Pence was cowardly for not trying to overturn the election.

This is happening in the United States of America. This is on Donald Trump. This is an assault on constitutional democracy. It’s not happening at the hands of Antifa. It’s not happening at the hands of BLM. It’s a MAGA mob, 100 percent. As I write this, the mob is trying to break down the door to the House chamber. Reporters in the press gallery say they’ve heard shots fired inside the Capitol.

You watch: this terrorist action by the MAGA mob is going to be what the Establishment uses to justify implementation of a social credit system and repression. This is the fault of Donald Trump, and his supporters.

As I write this, police in combat gear are rushing into the Capitol. This country will not soon recover from this.

UPDATE: As soon as the Congress can be made safe again, Congress must expedite the impeachment and conviction of Donald Trump. Trump should be escorted from the White House in handcuffs if necessary.

BREAKING: Trump supporters have breached the Capitol building, tearing down 4 layers of security fencing and are attempting to occupy the building — fighting federal police who are overrun

This is the craziest thing I’ve ever seen in my life. Thousands, police can’t stop them pic.twitter.com/VVdTUwV5YN

Look at this: a MAGA protester breached the Senate chamber, took the president of the Senate’s seat, and shouted, “Trump won the election!” UPDATE.2: These terrorists deserve to be shot:

Shocking scenes in D.C. show Trump supporters smashing windows and breaking inside the Capitol building, which is on lockdown. The Mayor has announced an emergency curfew. pic.twitter.com/LIc2qMIlqp BREAKING: Woman rushed out of Capitol building on a stretcher, “covered in blood” pic.twitter.com/IKmMmHNyZC

BREAKING: Woman rushed out of Capitol building on a stretcher, “covered in blood” pic.twitter.com/IKmMmHNyZC

It took 159 years, but a mob marching behind a confederate flag has stormed the US Capitol. They are doing so on @realDonaldTrump’s express orders. pic.twitter.com/Q9MnbT0emZ

UPDATE.6: When he’s right, he’s right. I wish I had taken David French more seriously about this:

UPDATE.7: What a foul statement by Trump: “this was a fraudulent election,” they stole it, etc. … but we have to have peace. At least he told them to go home. I don’t think this mob will listen to him: UPDATE.8: Reader MichaelGC, speaking for me:

It occurs to me upon watching these events unfold that the great idea and tradition of a peaceful transfer of power has been broken with this storming of Congress, halting the formal procedure of recognizing and recording electoral votes prior to the inauguration.

Trump has acted progressively more deranged and stunted since losing the election. Is this debacle what he had in mind all along? He invites his minions to convene at the Capital, tweeting angrily and intermittently. This morning he whips them into a frenzy, then when the all-too-predictable thing happens, he tweets something to the effect of “be nice, now.”

Way too little, way too late. Trump is trying to pull off a coup, disrupting the process for installing the next duly elected president with mob action. As soon as the situation is under control (pray to God it is) Trump needs to be article 25’d out of office ASAP. Have President Pence for 2 weeks, then hand it over to the one who was elected, Biden. Trump has proven himself unfit to occupy the position he is in for one more minute.

UPDATE.9: Last summer, some leftists rolled a guillotine down the streets of Washington, DC. It was horrifying. Now, this is what the MAGA mobs are doing today: Fully endorse. Do it now. This has to end. This Trump garbage not only has to end, it has to be utterly and decisively repudiated by Congress. This is for history.

These MAGA idiots just handed the Left a gift that it could not possibly have earned on its own. A political scientist friend says that the Georgia vote gave Democrats control of Washington, and the MAGA riots gave Democrats a mandate.