Trump Trial: The Disgust Of It All 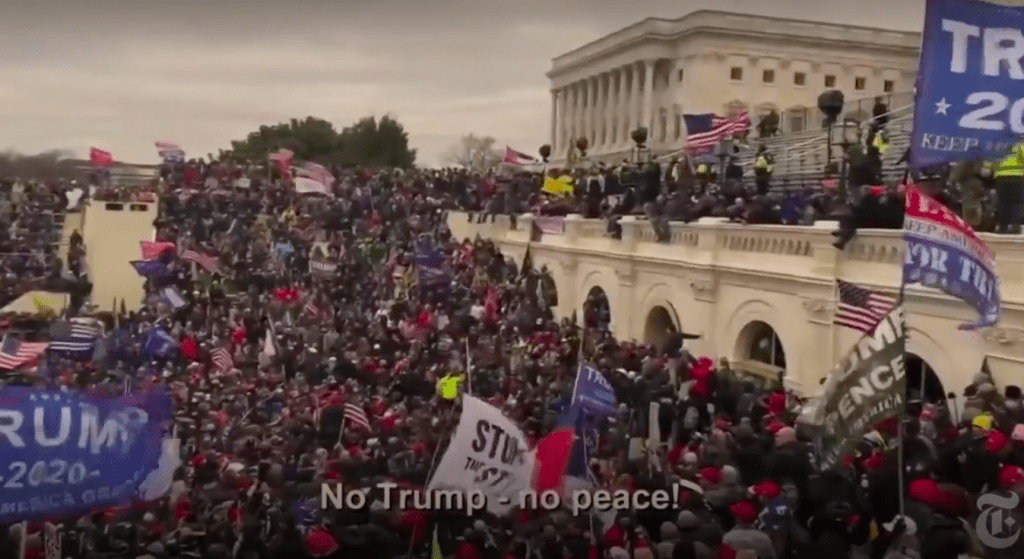 Here is the 13-minute video the House impeachment manager played in the Senate impeachment trial of Donald Trump today:

I urge you to watch it, to be reminded of the sheer violence of that day. Every single conservative watching it, ask yourselves how you would feel if this was a Black Lives Matter mob. You know exactly what you would think, because I watched those mobs last summer and thought the same thing. One of the things I thought back then was that mobs were a Democratic thing, not a Republican thing. I was wrong. What you see in this video is a Trump mob, no doubt about it. Trump incited them to go up to the Capitol and “fight like hell” to stiffen the spines of “weak” Republicans who might not vote with Trump to overturn the election.

It is hard for any patriot to watch this video of what that scummy mob did and not be furious all over again. The impeachment managers included this Trump tweet, which the president sent out at the end of that horrible day:

I don’t care if Trump gets convicted. He’s not going to, because Republicans in the Senate won’t break ranks, but if Trump were to be convicted, that would be fine with me. I’m sick of what he represents: the fatmouthing idiocy, the mob spectacles, the utter incompetence. I was not a Never Trumper, and I even encouraged people living in purple states to vote for him last fall, but Trump’s behavior after the election made me regret that. He has tremendously damaged the Republican Party and prospects for conservatism. If his conviction results in him never being able to run for office again, good. The GOP has to cut him loose, and free itself from the idea that being emotionally demonstrative is any sort of substitute for getting things done.

Look at this story to see what is happening now; here’s the headline:

Fortunately for the Republicans, the Biden Administration is bound to go way too far on wokeness, and stop the Republican bleeding. But in a country split right down the middle between right and left, the Republicans can’t afford to lose 10 to 20 percent of their voters — especially with Generation Z, far more liberal, coming up to replace the dying Silents and Boomers.

Did you see the 45-minute rambling speech on the Senate floor by Trump’s lawyer yesterday? It made your average pothead’s discourse seem like a model of concision. The incompetence was just mind-blowing. Meanwhile, as a conservative political scientist friend keeps pointing out, Biden and his minions are marching through the bureaucracy, reshaping it in their image. This is the difference between having a president who is interested in governing, and one who is interested in tweeting. It makes you sick, the waste of the last four years. If Trump hadn’t had a hissy fit and lost Georgia for the Republican Senate candidates, chances are the GOP would still hold the Senate today, and be able to blunt at least some of what Biden is going to do.

Here in Louisiana, a lot of Republicans are mad at Sen. Bill Cassidy for actually having an independent mind when it comes to Trump. Cassidy is a very conservative Republican, but after that humiliatingly bad presentation by Trump’s lawyer, Cassidy was one of six GOP Senators who voted to let the trial proceed:

Senator Bill Cassidy of Louisiana did not just vote this week with Democrats to proceed with the impeachment trial of former President Donald J. Trump — he also effectively shamed his fellow Republican senators by voicing, and acting on, what many of them were surely thinking.

Mr. Cassidy blistered Mr. Trump’s lawyers as “disorganized” and seemingly “embarrassed by their arguments,” explaining that their poor performance and the compelling case by the Democratic House impeachment managers had persuaded him to break from his party’s attempt to dismiss the proceedings on constitutional grounds.

“If I’m an impartial juror, and one side is doing a great job, and the other side is doing a terrible job, on the issue at hand, as an impartial juror, I’m going to vote for the side that did the good job,” he told reporters on Tuesday. He did, though, emphasize on Wednesday that his view on constitutionality did not “predict my vote on anything else,” namely whether to convict Mr. Trump, saying only that he had an “open mind.”

By becoming the only Senate Republican to switch his position from the one he held last month on a similar question about the constitutionality of holding an impeachment trial for a person no longer in public office, however, Mr. Cassidy delighted Louisiana Democrats, angered Republicans in his home state and presented himself as a one-man testimony of why Mr. Trump’s eventual acquittal is all but inevitable.

“There is literally nothing that the Trump lawyers could do to change any of these other Republicans’ minds,” said Senator Brian Schatz, a Hawaii Democrat. “They couldn’t have tanked it on purpose any worse than they did, and they still only lost one.”

Well, to be fair, if a senator really does believe that it’s unconstitutional to try a former president on impeachment charges, then a piss-poor case made by a Trump lawyer doesn’t alter those facts. But I am proud of my senator for telling the truth about the incompetence of the president’s team, and for voting his own convictions instead of being a MAGA lemming.

The thing is, Republican lawmakers surely know that Trump, even out of office, has enough support on the Right to split the GOP, and make it where Republicans don’t win national elections for a long, long time.

All he had to do was accept the fact that he lost, and go gracefully. The Republicans would likely have kept the Senate, and would be looking forward to gains in 2022. But he couldn’t do that. Now look where conservatism is.