The Day Trump Lost The Presidency 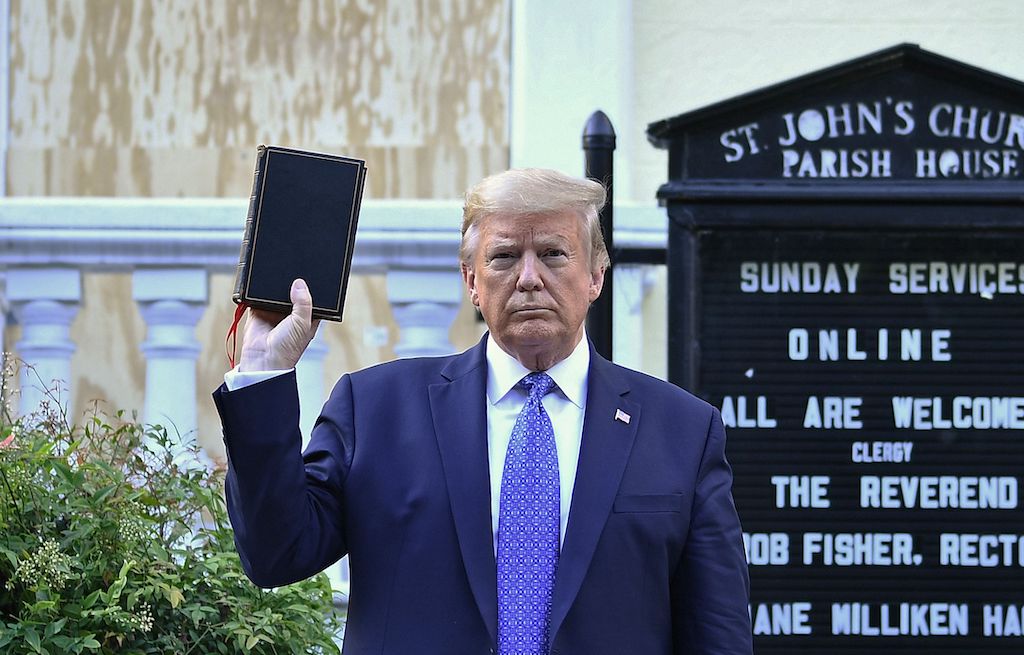 (Let me remind you from the start: because TAC is a not-for-profit entity, nothing I write in this or any post should be taken as telling anybody how to vote in a particular race. What I offer below is analysis.)

I believe that yesterday was the day that Donald Trump lost the presidency.

After days of urban rioting, the likes of which America hasn’t seen in over fifty years, the President of the United States finally deigned to show himself and address the nation. He gave a pro forma address in the White House, then, law enforcement personnel having gassed peaceful protesters to clear the way for the president to walk across the park to St. John’s Church, Trump strolled over, stood in front of the church holding a Bible, for a photo op.

A conservative white Evangelical pastor friend texted me his disgust:

Conservative Evangelical pastor txts: “He’s standing in front of one of the most theologically liberal churches in America holding a Bible that is not his and that he does not read while appropriating the symbols of a religion that he doesn’t observe. Yeah, I’m really impressed.” pic.twitter.com/FjFpZ2avZI

By bedtime, the White House had put out a short propaganda film:

This is the act of a weak man who is left with nothing but to stand in front of a church flashing a Bible like a gang sign to get conservative Christians in line. It is pathetic. Today I see that he is going to visit a DC shrine to St. John Paul II — a purely political stunt. As a believing Christian, Trump’s cynicism disgusts me viscerally.

While the White House propagandists were making that video, Tucker Carlson was, well, reading the riot act to Trump on his program. Here is his entire 26-minute monologue. Carlson is disgusted by the leadership class in this country, which includes Trump’s weakness:

Trump’s weakness does not necessarily consist of his not sending in troops to shoot looters. It consists of him having no idea what to do other than create a pathetic propaganda moment that is so transparently cheap that it makes you throw up a little bit in your mouth. Trollope’s lines are a fitting epitaph for the MAGA dream, which died last night in front of St. John’s Church:

To be fair, the crises that have hit the United States in 2020 would have challenged the most able chief executive. Trump’s weaknesses — in particular, his disinterest in mastering details and his habit of confusing bluster for substance — have made a difficult situation much worse. It is undoubtedly the case that the Democrats and the media are a serious threat to the kinds of things conservatives value, and it is certainly true that the press is dishonest. All of these things can be true, and at the same time, Trump’s incompetence and unfitness for the high office he holds made intolerably manifest.

Think of it: the malignity of the Bolsheviks did not make Tsar Nicholas II more competent to address the crises overwhelming Russia. Saying, “Trump is bad, but the Democrats would be worse” may be true, but at some point, that ceases to work as a rationalization for a president who does not know how to do his job.

It is not Trump’s fault that so many American cities are engulfed by riots. The Minneapolis Police Department has been under the control of Democratic mayors for decades. It’s not Donald Trump’s fault that roving gangs looted Manhattan last night — a city controlled by a Democratic mayor and machine, and a state governed by a Democrat. It’s absurd to lay all the blame for this on Trump.

There will be some Pavlov pooches out there in the MAGAsphere who will respond to this, but Tucker Carlson reads the situation correctly: people will not forgive him for his mishandling of this crisis. To be fair to Trump, it is hard to know what specific things he, Donald Trump, could do to make things better. He has labored so tirelessly to create ill will and to damage people’s confidence in him. Of course he has enemies who don’t play fair. All presidents do. It’s how you handle it that makes the difference. I posted the other day this passage from Bill Buford’s Among The Thugs, his electrifying 1990s book about embedding with English soccer hooligans. He’s talking about the self-pity of one of the mob. I posted it the other day as an example of the egotistical character of the rioters. But it is also characteristic of Donald Trump, unable to grasp the consequences of the way he has behaved as president:

Harry had been drinking since five that morning and had, by his own estimate, five imperial gallons of lager in his stomach, which, every time he turned, rolled of their own accord. Harry had been busy. He had been one of those who had abused the bus driver on the ride into the city, and he had abused the bus driver on the ride to the ground. He had urinated on a café table that had, in his inimitable phrasing, a number of “Eyetie cows” sitting around it, and he had then proceeded to abuse the waiters.

In fact he had spent most of the day abusing waiters— many, many waiters. Who could know how many? They all looked so much alike that they blurred into one indiscriminate shape (round and short). He had abused the Acting British Consul, the police, hotel managers, food vendors of every description, and any onlooker who didn’t speak English—especially anybody who didn’t speak English. All in all, Harry had had a good day out, and then, in the full, bloated arrogance of the moment, he saw the following: thousands of Italian supporters converging on Harry’s bus. They had surrounded it and were pounding on its sides—jeering, ugly, and angry. What right had they to be angry?

Do you see what they’re doing? Harry said to the bloke behind me, full of indignation. And then if there’s trouble, Harry said, they’ll blame the English, won’t they?

I believe there are a significant number of people in this country who are outraged at the rioting, and want civil peace restored. These are natural conservatives; a conservative president ought to be able to speak for them and act on their behalf. And they are listening to and watching this president, and coming to realize that in the clutch, he’s choking. There is nothing to him. Pasteboard and tinsel. A sham. Nobody fears him, and nobody respects him. The country needs General Patton, but we’ve got Captain Kangaroo.

They may be thinking that the best interests of conservatism would be served by going into opposition for four years, and trying to rebuild, instead of spending the next four years having to defend this man, and pretending that this Dumpster fire lights the way to a better future. After four more years of this, they may be reasoning, there may not be much of a Republican Party left.

UPDATE: You know what? If these riots continue, none of what I say here will matter in November. Trump can be as bad as he wants, but if ordinary people see the Democrats and their media lackeys making excuses for the rioters, they’ll vote Trump.