‘Grooming The Next Generation’ 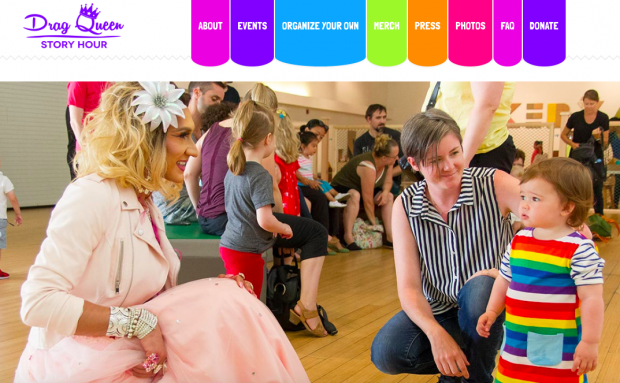 I know it’s three days before Christmas, and everybody’s out shopping and not reading blogs (congratulations to you on having your priorities straight), but I wanted to mention this here before I forget about it.

Yesterday I posted something about “The Desmondization Of America”, a term that refers to drag being politicized and valorized as a force for political progress, and drag manifesting in places it should not be (e.g., in the chapel at a Lutheran seminary, and in the lives of children). Chapels are sacred spaces by definition, but I believe a library is a kind of secular “sacred space,” in that libraries are public institutions that ought to be treated with reverence.

A reader wondered how on earth Drag Queen Story Hour at libraries became a thing. I pointed out that “librarian” is a rather woke profession.

Reader John responded to this:

Librarian here. Yes, it is. Most of us just go about our daily lives and work. But there’s a small percentage who engage in outright social and political advocacy. And they meet with no resistance within the profession, which is why they succeed.

The spread of drag queen storytime has been incredibly fast–just about two years. It went from a new idea to “you’d better not oppose this if you value your job” in that amount of time.

Next up: leatherdaddy storytime. Because if we accept drag queen storytime, then what is the argument against other fetishes?

That’s a good point. Why not Leather Daddy Story Hour? If you accept Drag Queen Story Hour, why not? What is the limiting principle? I’m not trolling; I’m asking seriously.

Did you know that there’s a sophisticated Drag Queen Story Hour website? The site itself explains the concept: Last month, a drag queen (in ordinary clothes) testified at a library board public hearing in Lafayette, La., defending his group’s unsuccessful attempt to hold a DQSH at the local library. He made an unfortunate statement — unfortunate from the DQSH point of view — when he said that DQSH is about “the grooming of the next generation” (see here, starting at the 2:20 mark). What he meant is that DQSH intends to shape the attitudes of the next generation, starting in childhood. This is not normal. They are trying to make this normal. Look at the photo that illustrates this post. It’s from the DQSH website. That child has been dressed in a rainbow dress by her queer-positive mother, and she is confronted with a man dressed as a woman. She is visibly anxious, maybe even frightened. But see, they’re all grooming these kids to accept genderfluidity as normal. That is the point of it!

UPDATE: A reader says you can’t see the scared face of the toddler confronting the drag queen in the lead photo if you’re reading this on a mobile device. Here’s a detail from that shot. Yeah, that kid is thrilled to be having her prejudices challenged: Today, there’s a DQSH at a bookstore in — wait for it — Peoria:

Yes, it’s playing in Peoria. Not at a public library, but it’s still playing.

This past summer, at its annual convention, the American Library Association offered a workshop to help librarians implement DQSHs in their libraries:

One children’s librarian, blogging at the organization’s website, raved about the transformative possibilities of DQSH, even though, in her words, “I serve a community that, at surface level, might not seem to be crying out for a drag queen storytime.” But she’s going to try to give it to them, because

Displaying and celebrating gender fluidity has the potential to open minds and hearts to worlds beyond what they may have been exposed to, foster acceptance, and teach children that we are all valid and who we are is beautiful.

Remember that public libraries are paid for by the public, which is to say, you. Why sit back and take this politically-motivated profanation?

I repeat my question from earlier: if it is impermissible discrimination to not allow Drag Queen Story Hour, on what grounds would you forbid Leather Daddy Story Hour? Answer the question, or admit that this is another Law of Merited Impossibility thing: It will never happen, and when it does, you bigots had better bring your children and grandchildren.

As lots of readers here know, I self-publish children’s books. One of the many reasons I decided a decade ago to self-publish is because I had heard from many people in the middle-grade children’s fiction arena that this stuff was starting to make its way down to the younger age groups from YA fiction. Forget “Heather Has Two Mommies” or the gay penguins picture book stuff; there’s a real effort on to publish books for the 8 to 12 crowd that feature characters who are LGBT. Here’s a link to a site that showcases LGBT books for children ages 2 to 13+ for instance:

Barnes and Noble’s kids blog featured a post back in January of this year celebrating that 2018 was a “banner year” for “Queer girl middle grade” books (and you’ll notice that these books tend to follow the template of “lesbian/queer = good, religion (particularly Christianity/Catholicism) bad):

And an author’s blog back five whole years ago showcased the trend, declaring that YA (books written for 12/13 and up) is “too late” to expose kids to the queer agenda:

https://vikkivansickle.wordpress.com/2013/06/13/ya-is-too-late-gay-characters-in-middle-grade-fiction/
Grooming the next generation isn’t just happening at the library. It is a major agenda item of the Big Five publishing companies, and the agents who successfully rep middle-grade fiction to them are a tight little group (they brag about it on Twitter, among other things) who are wholly on board with this agenda. Anybody who objects to “selling” kids on the idea that the most extreme types of sexual perversion are just “normal” is labeled a bigot (and forget getting an agent or access to 85% of the book market; it won’t happen, not in fiction where this stuff is tightly controlled).

Some people would object that this LGBT agenda fiction isn’t really that big of a deal, that most MG fiction is still pretty tame. But a recent “reboot” of those sweet old Mrs. Piggle-Wiggle tales (for kids 7 or 8 years old) features a story about a boy being raised by a lesbian couple, and bestselling MG fiction author Rick Riordan (the Percy Jackson writer) now has a series in which one of the main characters is genderfluid. He has received great acclaim for this because his supporters insist that teaching middle-school children to accept concepts like gender fluidity so positively will form the tolerance of the next generation.

This isn’t some harmless thing. This is proselytizing for a new religion. Parents of middle-grade children (roughly ages 8 to 13), you may want to ask what your children are reading these days. And it’s not just books, either; children’s TV is pushing the gay agenda more and more openly these days too.

The eradication of heteronormativity is the end goal. What the LGBTQIAetc. movement wants is for every human to be born “Questioning.” “Am I really a boy just because I have male body parts, or really a girl just because I have female ones? What if I’m a boy trapped in a girl’s body, or a girl trapped in a boy’s? Does the fact that I’m eight and like my fellow female friends better than any boys in my class mean I’m a lesbian? How do I know if I’m not bisexual, even if I’m a boy attracted to girls, unless I sexually experiment with boys first?” What the queer agenda demands is for *every* person to go through this process, for no person to take it for granted that they are simply heterosexual and born in the right body even though that is true for 97% of the human population.

And they will instruct our children that if they *don’t* ask these questions, if they *never* ask them, then there is something deeply wrong with them, that they are bigoted and evil for failing to label themselves as “questioning” instead of embracing their obvious heterosexual identity from an early age. Drag Queen Story Hours are just the beginning.