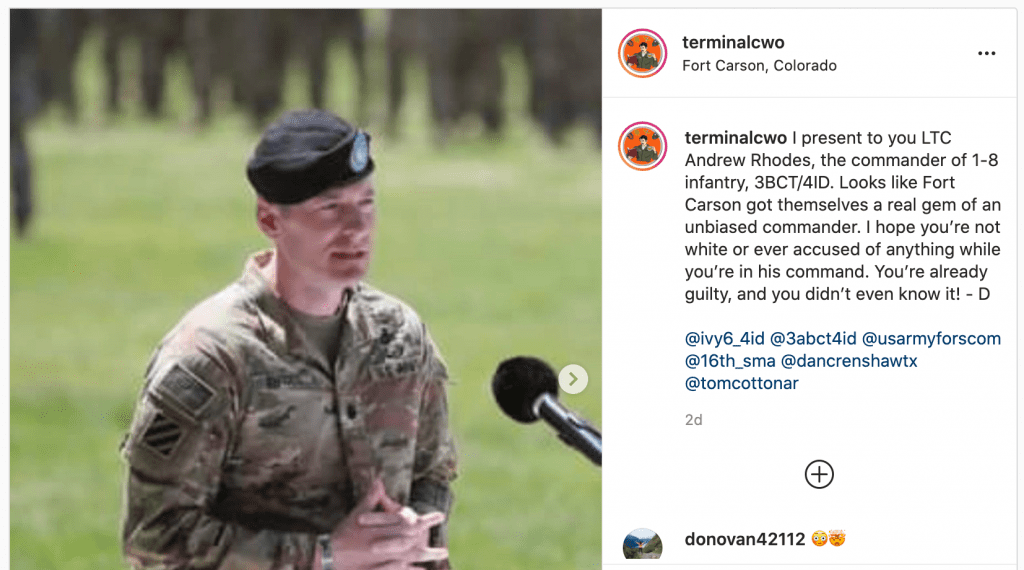 The Left’s long march through the institutions continues through the US military. Here’s news from the front lines of the culture war, a war that the Pentagon’s leadership is apparently planning to win for the Left:

Its active wars ending, its ranks both smaller and more diverse and its talent needs shifting, the Pentagon is embracing ideas like inclusion and adopting many of the efforts long used in the private sector to recruit and retain women and people of color.

Yet while many inside and outside the military have embraced the effort as overdue, some Republican lawmakers and influential conservatives are mounting an inchoate but increasingly loud protest and promoting the idea that the armed forces are becoming the latest pawn in America’s culture wars.

They have taken aim at a variety of initiatives, including a possible Pentagon plan to increase monitoring of social media posts from service members and the addition of reading recommendations on “white supremacy and systemic racism” to military training guides.

In stoking opposition, those critics say the Pentagon’s policies amount to imposing a liberal, and in some cases unpatriotic, worldview on the armed forces.

At a Senate Armed Services Committee hearing on the military budget Thursday morning, Senator Tom Cotton, Republican of Arkansas, grilled Mr. Austin as to whether he believed that the military “is a fundamentally racist organization.”

He ticked off a long list of complaints he said his office had received from service members about mandatory training sessions on “police brutality, white privilege and systemic racism.”

Mr. Austin responded that he did not believe the military was racist but defended the department’s policies.

“Diversity, equity and inclusion is important to this military now and it will be important in the future,” he said.

At times cutting off Mr. Austin when he tried to reply, Mr. Cotton warned, “We’re hearing reports of plummeting morale, growing mistrust between the races and sexes where none existed just six months ago, and unexpected retirements and separations, based on these trainings alone.”

How widely those views are actually held among service members in an increasingly politically diverse military is impossible to know. Military culture varies by service branches, rank and generations.

But the Pentagon’s leadership says its approach is necessary both to uphold the nation’s values and to assure that it can recruit people with the skills necessary for 21st-century warfare.

“The secretary has been very clear and fairly unapologetic about the fact that we want to get all the best talent that is available from the American people,” said John F. Kirby, a spokesman for Mr. Austin.

The Pentagon’s culture war has a new hero of battle: Lt. Col. Andrew “Dru” Rhodes, who describes himself as a “fervent anti-racist and anti-sexist.” He’s a white dude and a battalion commander. If this report is true, then he does not like white dudes. He reportedly told troops under his command that “white people are part of the problem.” As the reader who sent that to me said, “CRT [Critical Race Theory] will destroy our great military before China even gets the chance.”

Back to the NYT story that prompted this post, the informed source who passed it on said that the Pentagon is chasing a woke demographic that doesn’t exist:

A generation raised on Howard Zinn and the 1619 Project are not going to enlist, they are ambivalent at best about whether or not the US should be defended in the first place. So that leaves you with outliers that the current leadership regards as unacceptable and déclassé.

This is the same as so much of the woke Hollywood bombs, the marketing types are convinced that there is this massive demographic of woke types just waiting to consume. They believe this in large part bc of Twitter and the results are entirely predictable, just as they are likely to find here. Name one wokeist who is more likely to join an institution they see as racist, imperialist, and warmongering just bc its leadership mouths woke platitudes.

Heck, military service is considered déclassé for all but a small sliver of the middle class for cultural reasons, what do we expect to change?

If the US military earns for itself a reputation as hostile to white males and unwoke people, why should they put their lives on the line to defend a country that considers them to be “part of the problem”? What the Pentagon is doing here is really dangerous, and really foolish.

The military told Human Events, which broke the Dru Rhodes story, that it will investigate it. If it can be proven that Rhodes made those remarks, then he must be removed from command duty. If he isn’t cashiered, that will send a powerful signal to the troops — and to the country — about the kind of military we have, and are getting.