Clinton has every incentive to ensure that voters aren't reminded how lousy her foreign policy record is. 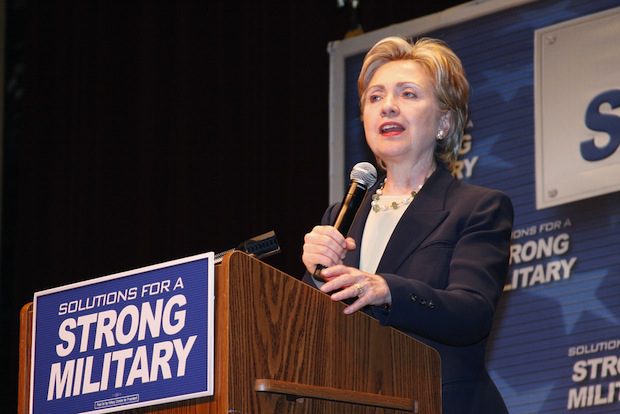 She had nothing of any substance to say about foreign policy, despite being a former secretary of state. She said she’d “do whatever it takes to keep Americans safe,” and spoke vaguely about diplomacy and America being a world leader.

Clinton’s brief references to foreign policy in her speech seem curious at first glance. She devoted just two or three out of forty-five minutes to these issues, and spoke about them as generically as possible. That seems an odd choice for someone who is going to cite her tenure at State as one of her top qualifications to be president. Even so, it’s probably the safest course for her to take. Her hawkish record is out of step with large numbers of Democrats, and that same record is nothing to boast about to general election voters. That record shows not only a consistent pattern of endorsing the relatively more hawkish options in each debate, but it shows that she has consistently misjudged major issues in doing so.

Everyone knows about her vote for the resolution authorizing the Iraq war, but that is just one in a series of bad decisions. Though she was Secretary of State in Obama’s first term, she did little to shape the administration’s agenda. The Libyan war is the glaring, damning exception to this, and she owns that intervention as much as anyone in the administration after Obama. In other internal administration debates, she was predictably on the side of those advocating U.S. escalation or sending weapons into ongoing conflicts. Her instinct is to insert the U.S. into conflicts where it doesn’t belong, to escalate conflicts that it is already in, and to interfere where the U.S. has nothing at stake. Most of her likely Republican opponents can’t use this against her very effectively because they have favored all of the same things, but she has every incentive to ensure that voters aren’t reminded just how lousy her record is.

She and her advisers may also be correctly calculating that foreign policy isn’t a high priority for the vast majority of voters, which is why her speech on Saturday was relentlessly focused on domestic issues. Despite the rather odd Republican confidence that 2016 will be a foreign policy election, Clinton is likely making the better bet that it won’t be nearly as important as the GOP expects it to be. Unlike when her husband first ran in 1992, Clinton doesn’t need to make people believe that a Democratic president would be interventionist and aggressive overseas. We are only too aware of this after eight years of Clinton and six of Obama. On the contrary, she needs most voters to forget that her foreign policy is so reliably meddlesome and activist abroad. The best way to keep voters from examining her foreign policy record too closely is to say as little as possible about it. Eventually, she will have to say something, but we should expect her to keep things as vague and generic as she can.