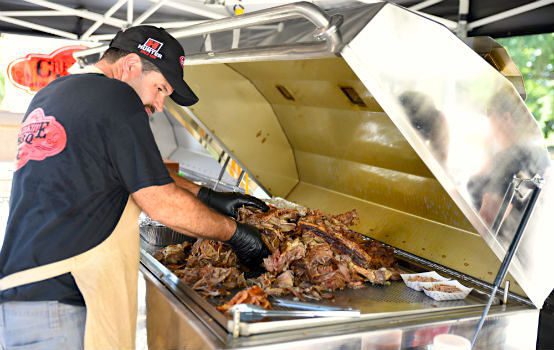 Give you one reason you should read another book on the South, you say? Howabout: John Shelton Reed. The sociologist, long-time University of North Carolina professor, and barbecue connoisseur (I could say “North Carolina barbecue,” but that would be redundant) has been one of the most original and entertaining voices on all things Southern for nearly 50 years. His 1972 The Enduring South, in which he argued that the South is different from the rest of the United States but that what makes it different is always changing, put him on the map. Since then there have been touchstone sociological studies (One South (1982) and Southerners (1983)), a humorous typography of white Southerners (Southern Folk, Plain and Fancy (1986)), several collections of essays (Whistling Dixie (1992) and Minding the South (2003), among others), and, of course, the one and only Holy Smoke: The Big Book of North Carolina Barbecue (2008), which he wrote with his wife, Dale Volberg Reed.

His latest is Mixing It Up: A South-Watcher’s Miscellany, which collects a selection of his work over the past 20 years. Reed is not sure, he tells us in the preface, that the pieces “hang together enough to make a book.” They are varied. We have essays on what it means to be Southern, lectures and op-eds on Southern politics, reviews, short pieces on food, brief analyses of the 1991 Southern Focus Poll, and even an interview. But Reed shouldn’t worry. They hang together just fine—all of them deal with the South in one way or another, and what better way to reflect a motley people than a motley collection of writing?

If the South is still different from the rest of the United States—and Reed thinks it is—what makes it the South today? It’s not an agrarian way of life—something that was already becoming a thing of the past when Robert Penn Warren, John Crowe Ransom, Donald Davidson, et al. extolled its virtues in 1930. Nor is it the “burden of Southern history.” “Southerners,” Reed writes, “are quite likely to agree that the Civil War doesn’t mean much to them personally.” Civil War monuments continue to be removed from public spaces (or pulled down by mobs, like UNC’s Silent Sam) and support for displaying the Confederate flag on state property has waned. Rural poverty (Northern poverty is almost entirely urban) and terrible test scores are two things that many people still associate with the South, but even those are increasingly things of the past (Mississippi aside). “Someone described the economic South a few years ago,” Reed writes, “as something like ‘patches of green in a vast brown swamp.’ These days it would be more accurate to say that there are patches of brown in a flourishing green forest.”

Then, of course, there are the regional differences across the South that can make it sound absurd to talk about it in the singular. Barbecue is not the same in Memphis and Goldsboro, nor are accents in Savannah and Boone, nor the flavor of local politics in southern Louisiana and middle Tennessee.

And yet, Southerners still have more things in common with each other than they do with non-Southerners. “Southerners,” Reed writes, “really do tend to be more religious, more conservative, more polite, more ‘touchy.’ They’re more likely to hunt and fish, stop their cars for funerals, and eat black-eyed peas on New Year’s Day.” The economic progress of the South (a miracle if one considers where the South was a hundred years ago) has led Southerners to invent “new and unpredictable ways to be different.” Consider two stereotypical Southern obsessions: country music and NASCAR. “We need to remind ourselves,” Reed writes, “that both of those were twentieth-century innovations, made possible by technologies that didn’t exist before. So, for that matter, were key lime pie and ice tea, which required sweetened condensed milk and reliable supplies of ice, respectively.” “I would bet the farm, if I had a farm, on two propositions,” Reed continues. “One is that people will still be talking about the South a hundred years from now. And the other is that the South they’ll be talking about will be a very different place…from the South we’re in right now.” Though this may be changing, black and white Southerners also still share more in common than their counterparts to the North. One thing they share more than others is food, and by food, of course, I mean barbecue. When we lived in Texas, some black neighbors once invited us over for a birthday party. We talked more over and about brisket than we had about anything else in the preceding six months. “I don’t think,” Reed writes, “you can really understand the South if you don’t understand barbecue—as food, process, and event.” Barbecue, like the South, is both regionally distinct and pan-Southern. The best places are in small towns or out-of-the-way holes in the wall in “unsavory neighborhoods.” Recipes differ from cook to cook and the quality of the batch from day to day. But if you “want to talk about heritage, not hate,” Reed writes, talk barbecue. “I once suggested half-seriously that if the South needs a new flag—as it surely does—we could do worse than to use a dancing pig with a knife and fork.”

One thing that hasn’t changed is how Southerners do death. In a review of a book on Southern funerals, Reed remarks that “a genteel Southern funeral is not the time or place for innovation.” “Whether you’re talking about flower arrangements, hymns, liturgy, or funeral food, there’s a right way and a wrong way to do things, and the right way is usually pretty much the way it has always been done.” This includes making homemade mayonnaise to accompany the “tomato aspic God meant for it to go with,” though some traditions differ across denominations. Episcopalians “tend to drink after funerals…and often before, as well.” They will happily eat a “green-bean casserole with Campbell’s soup and onion rings,” but they would never bring one to a funeral. Methodists, on the other hand, “believe that to get into heaven you have to bring a covered dish.”

On the topic of heritage—and symbols like the Confederate flag and Confederate monuments—Reed is an eminently practical man. “The beginning of wisdom when it comes to the Confederate flag,” he writes, “is to recognize that it means different things to different people”—“heritage” to some, oppression to others. But he also suspects, and I think he’s right, that “many Southerners of both races are profoundly bored with the subject.” While he doesn’t address the issue of Confederate monuments, he does make the case that late defenders of slavery or segregation should not simply be erased from the past. “It’s not that these views ‘deserve a hearing,’” he writes in a review of The Oxford Book of the American South, “it is rather that the dominant voices of the South, not the dissenting ones, are now the most alien, the hardest for most modern readers to understand, and thus, in some ways, the most challenging.” It may be a cliché that those who cannot remember the past “are condemned to repeat it,” as George Santayana put it, but it’s no less true for being one.

Most of the essays have been published previously, and readers may wish to skim the section on Southern polling data, though Reed does draw some interesting conclusions from them. But if you’ve enjoyed Reed’s charm and humor over the years, you’ll want to pick up a copy of this book. I read most of it on my front porch waving to the occasional neighbor, which is the perfect way to read Reed. I would suggest reading him at your local barbecue joint, but not even John Shelton Reed can compete with pulled pork.

Micah Mattix is literary editor of The American Conservative.