Like Waylon Jennings, Donald Trump is in danger of being coopted by the establishment he defeated. 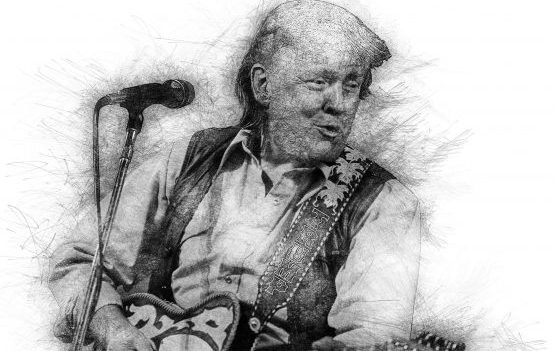 Years ago, a man with gaudy suits and a flamboyant hairdo toured America, defying a wealthy, entrenched, and controlling elite. The establishment had stuck to the same tired formula for years, and the people were hungry for a change. As the man spoke into the microphones on stages across the nation, he broke traditions and shattered industry orthodoxy with a charisma that drew crowds at every stop. Where his predecessors were cookie-cutter and buttoned up, carrying the same old tune produced in the smoke-filled backrooms of power, he was a maverick that wasn’t afraid to swing around his less-than-spotless past. His popular movement changed American culture forever. And the establishment, which once despised him and worked to silence him, now uses his style as a template for popular success.

That maverick was Waylon Jennings.

Entering the Nashville music scene in the 1960s, Jennings found the country mecca run by a clique of powerful record labels. Not just song content but everything from the lyrics down to instruments, clothes, and hairstyles were strictly regulated by “the Suits,” profit-oriented corporate executives who kept a rigid rulebook mostly defined by the precedents set by the late crooner Hank Williams.

Jennings, or simply “Waylon” as he came to be known by his fans, began his musical career touring with singers like Buddy Holly in the 1950s. Throughout the early ’60s, in part driven by depression and a drug habit formed from guilt over giving up his seat on the plane that crashed and killed Holly, Waylon attempted to break from industry standards into a more roguish sound. He found sharp resistance from record companies, whose leadership suppressed any artistic deviance in the interest of maintaining a dull but effective production formula.

Rather than conform to the Suits, in an act of defiance Waylon grew out his hair and beard, changed his wardrobe, and released the album Ladies Love Outlaws in 1972. The record companies were not pleased. To their horror, the thorn in their side did not wither away; their reliable constituency of old-time music fans did not rebuke his uncharacteristic brashness and unusual new style. Instead, by 1973, Waylon’s self-directed albums Honky Tonk Heroes and Lonesome, On’ry and Mean were smash hits, and by 1974 the album This Time topped the charts and became the first country album in history to go platinum. Assuming his newfound role as a king of country, Waylon led the 1970s alongside fellow “Outlaws” like Willie Nelson, Johnny Cash, Kris Kristofferson, David Allan Coe, and even Hank Williams’ son.

At this point, the record label executives were confronted with a serious predicament. A man they had vainly tried to suppress a decade prior had become one of the most famous, beloved, and influential figures of the genre. Waylon’s partner Willie Nelson had formed his own record label, Atlantic Records, to extricate the Outlaws from the established parties. Worse, Waylon’s countercultural style had become the dominant demand of the consumer base who now, tasting all-American authenticity, rejected the polished, scripted, brylcreemed wailers of the past.

Like our Washington elites, the Nashville executive cadre was isolated from public opinion. Also like our Washington elites, they were clever. As former Trump campaign advisor Roger Stone said, “When the establishment cannot defeat you, they first try to discredit you; when they can’t do that, they seek to coopt you.” And that’s just what they did with Waylon. As decades passed, powerful labels like RCA began to experiment with enforcing Waylon’s populist style onto fresh recruits.

Thus we reach our present moment in the pop country playbook, where even the most straight-and-narrow boy from the suburbs is told by his record label image group to pose as a fugitive outlaw for musical clickbait. This saga, particularly the present problem of outlaw poseurs, was lamented in troubadour fashion by Waylon’s son Shooter Jennings in the 2011 song “Outlaw You.”

In their respective industries, Waylon Jennings and former president Donald Trump share striking similarities. We need not delve into a lengthy recounting of Trump’s insurgent candidacy and hostile takeover of the Republican Party. In short, his calculated rejection of party dogma, stylized as off-the-cuff stumping where he decried nearly every pillar of Bush conservatism from trade policy to the Iraq War, was red meat thrown before a working class desperate for authenticity. Trump broke the timeless rules for American conservative politicians: never swear, be a family man, preferably not divorced, and run on the GOP bread-and-butter issues like keeping the price of a gallon of milk low and NATO-oriented defense spending high. And don’t even think about saying something that mainstream news media could possibly skew as racist, Islamophobic, or xenophobic.

Both Jennings and Trump entered their industry hated by its old guard. The key—the thing most relevant for those on the populist right seeking cultural and political success—is understanding how both were coopted by that same old guard. In other words, how American Goliaths have been uncannily good at copying their David’s slingshot.

As the dust settles from the whirlwind of Trump’s presidency, it is apparent that wannabe Trumpian outlaws abound in the GOP of 2021. For the sake of not pointlessly burning bridges, I hesitate to provide a curated list, but we all know who the most egregious offenders are. In Nashville, the poseurs are (to quote “Outlaw You”) those who “namedrop Johnny Cash and namedrop poor old Hank” while singing “another man’s song with a big drum loop.” In the GOP, plucky faux-populists namedrop Donald Trump and tweet focus-grouped clapbacks while pushing the same dead consensus whose economic failures created the core constituency of the man they now imitate.

If unchecked, the very establishment that caused the crises that propelled Trump’s revolution, the “Conservatism Inc.” of the Bush era, will form a perhaps even deadlier “Populism Inc.” The task of Waylon Jennings Populists is to identify the wannabes from the real deals, then to direct money and grassroots support away from the grifters and towards the true (metaphorical) outlaws.

In Waylon’s day, there was never only one Outlaw. He always had allies, all unique in their own struggles with the establishment to unchain their own styles. In American conservatism, the same is true. When Ron DeSantis called the current crop of D.C. Republicans “lovable losers” and slapped perhaps the harshest regulations on major corporations of any modern Republican administration, he was channeling the voice of Waylon. When Josh Hawley broke a cardinal rule of Reaganism and called for the resumption of trust-busting, he rolled with Willie. When J.D. Vance implored young college Republicans to become “class traitors” in defense of the downtrodden working man, the Suits trembled.

Whether DeSantis, Hawley, or Trump himself carries the torch of Waylon Jennings Populism, the conservative movement cannot lose sight of the reason it arose in the first place. Waylon’s Outlaws won their battles, and in our day artists like Sturgill Simpson, Cody Jinks, and Corb Lund carry the standard of country populism. In politics, the stakes are far more dire. Trump started a movement against an elite whose formula did more than just bore listeners with repetitive music. Die-cast politicians gave us economic and social collapse that has left vast swaths of the country suffering from opioids, industrial flight, and deaths of despair. To have any chance of actually fixing these problems, conservative populists must work tirelessly to tell the true from the facsimile and elevate the fighters above the grifters. When all is said and done, in the backrooms of K Street, we must hope to make the Suits ask, “Don’t you think this populist bit’s done got outta hand?”

Bryson Piscitelli is an intern at The American Conservative and the editor-in-chief of the Carolina Review at UNC Chapel Hill.