Are There Two Americas?

Many wish to “unsee” their political adversaries. 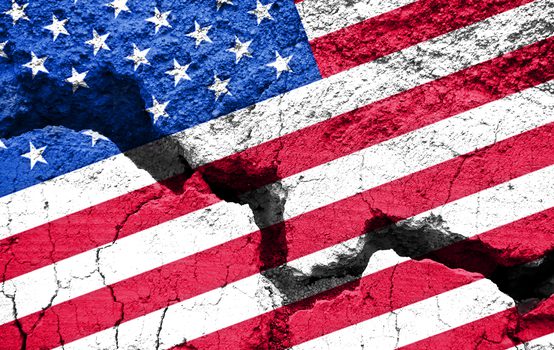 It was said on the eve of the American Civil War that Southerners and Northerners shared the same country and believed in the same God but were dreaming different dreams. Citizens of Beszel and Ul Qoma, the two cities imagined by the British author China Miéville in his 2009 novel The City & The City, don’t just dream different dreams.

While the cities occupy the same geographic space, their residents speak different languages, use distinct alphabets, embrace divergent cultures, and even look and behave differently. They walk alongside each other on the sidewalks and drive inches apart on the roads, but they are able to “unsee” each other, a skill they learn from an early age.

A resident of Beszel or Ul Qoma sees only the planes belonging to his city’s airline leaving from and arriving at the airport. Indeed, while there is only one physical airport, residents believe there is a separate airport for each city, a phenomenon that also occurs with international dialing codes and internet links. Police officers are not allowed to investigate crimes committed in the other city. And if a resident travels from one city to another, he ends up standing up in the exact place where he started, but able to see the other city.

Miéville’s novel is probably meant to be an allegory about the kind of inter-communal strife that engulfed parts of the moribund Soviet bloc, including the former Yugoslavia, where ethnic and religious groups that shared a common national identity ended up competing for control of the territory. The result in many cases was that peaceful coexistence gave way either to a violent separation, as in Bosnia, or to a peaceful divorce, like the one between Czechs and Slovakians.

In some cases, the result took the form of never-ending conflicts between the rival communities, such as between Armenians and Azeris over the control of Nagorno-Karabakh. These struggles joined a long list of similar conflicts elsewhere: Jews vs. Arabs in Israel/Palestine, for instance, or Greeks vs. Turks in Cyprus.

Beszel and Ul Qoma are especially comparable to Israel and Palestine, two states that occupy the same territory between the Jordan River and the Mediterranean Sea and share the same capital city, Israel’s Jerusalem and Palestine’s al-Quds. But in Miéville’s version, instead of continuing to fight over the space, the two groups would simply live together while ignoring each other.

Arab Jaffa would not exist in Israel, while Tel-Aviv would disappear from Palestine. In Al Quds, the Arabs would congregate at the al-Aqsa Mosque on the Haram esh-Sharif, known to Israeli Jews as the Temple Mount. There the Jews would visit the Western Wall and prepare to build the new Third Temple on the same area where al-Aqsa used to stand, but that now exists only in Al Quds. Israel and Palestine would have one common security challenge: preventing the residents of one state from breaching the barrier that is separating them from the residents of the other state, ensuring that Jews do not see any Arabs and Arabs do not encounter any Jews.

Unfortunately, all of this happens in a fictional novel. In the real world, Arabs and Jews have to see each other. And the choice is between a one-state solution where Arabs and Jews would coexist peacefully in one state, a formula that has been rejected by both sides, and a two-state solution, under which the territory between the Jordan River and the Mediterranean Sea is divided into two separate states, Israel with its Jewish majority and an Arab Palestine next to it.

In fact, one of the reasons there is so much opposition to the establishment of more Jewish settlements in the occupied Arab West Bank—or Judea and Samaria, as the Jews call the area—is that that would eventually create a reality of intermingling Arab and Jewish populations, making it more difficult to establish a separate Palestine and creating a new reality of an Israel/Palestine, where Jews and Arabs would have no choice but to see each other.

Reading The City & The City in the aftermath of the 2016 presidential election, one imagines that many Americans would like to unsee those from other political communities. For all practical purposes, this may have already happened: most residents of Washington, DC; Manhattan; Marin County, Calif.; and Cambridge, Mass., didn’t know anyone who had voted for Donald Trump. West Virginians couldn’t have imagined someone casting a ballot for Hillary Clinton.

The writers of Saturday Night Live imagined something along these lines in a post-election skit, “The Bubble.” The Bubble is a place where Trump didn’t win the election, where “life can continue for progressive Americans just as before.” It is “a community of like-minded free thinkers … and no one else,” where hybrid cars, used-book stores, and “small farms with the rawest milk you’ve ever tasted” dominate.

Indeed, the observation that America is now split—between the liberal, secular, overeducated, cosmopolitan, pro-free-trade urban bicoastals who read the New York Times and voted for Hillary Clinton, and the conservative, traditional, high-school-educated, nationalist, protectionist rural residents of Flyover Country who watch Fox News and cast their ballots for Donald Trump—has become somewhat of a cliché.

There is certainly an element of a caricature in this narrative of effeminate Ivy Leaguers who shop at Whole Foods and cannot stand “real” Americans vs. racist, boorish, theocratic folks who gravitate to authoritarian figures and hate science. But as with every caricature, there is probably some element of truth in the notion of the Davos Man vs. the Middle American.

As a resident of Chevy Chase, Md., with its population of highly educated lawyers, economists, scientists, and media types, I have yet to encounter one Trump supporter in my neighborhood, where most residents looked as though as they were mourning a death in the family on November 9. Riding on a crowded elevator in my apartment building recently, I was interrogated by a loud neighbor who wanted to know if it was true that I voted for Trump. Before I had a chance to respond, those standing around started to distance themselves from me, and one young woman gave me a stare that seemed to say, “Even if you were the last male remaining alive on earth, I wouldn’t mate with you.” They all wanted to unsee me.

It’s not clear that these extreme sentiments are common outside the most politically homogenous enclaves. The caricature may be especially popular among intellectuals and activists who benefit from polarization, or would even prefer a real split that would allow them to expand their power and influence, where Democratic presidential nominees don’t need votes in Flyover Country and Fox News viewers don’t need to care what’s happening on MSNBC.

But even without a real separation, residents of one USA do not truly see the residents of the other. If Trump voters in the red states are all nativists and racists, how did Louisiana and South Carolina elect the children of Indian immigrants as their governors? And about that Davos Man: I know personally several Americans who took part in those meetings and can assure you that they don’t like artsy films, that they love the U.S. military, and that the only “cosmopolitan” thing about them is that they spend a lot of time in international airports.

Perhaps what we really don’t see is how similar we are. Trump won the election because he succeeded in getting the votes of white blue-collar workers, and the Democrats will continue carrying the African-American vote. But if one goes beyond the obvious electoral realities and studies the public’s attitudes on issues ranging from abortion and gun control to inequality and military intervention, the picture becomes more complex, and the ideological lines tend to crosshatch. We have not split into The USA & The USA quite yet.