Good, walkable urbanism matters more for a neighborhood than an arbitrary labeling of city or suburb. 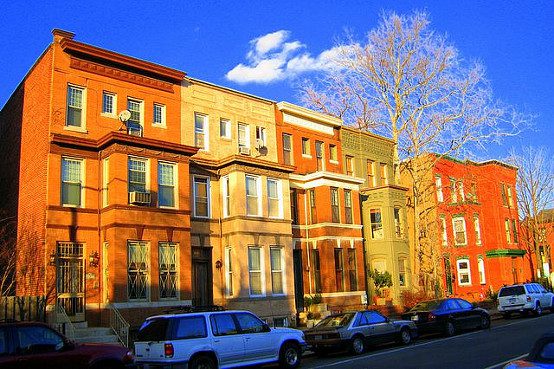 Walking through Washington’s Capitol Hill neighborhood one afternoon a few years ago, I remarked to a friend that the streets surely must represent the epitome of good urban design. A neighborhood of mostly two- and three-story handsome brick townhouses, punctuated by the occasional mid-rise apartment building, it was dense enough to support convenient corner stores; my apartment there was a short walk from drugstores, restaurants, supermarkets, parks, and transportation downtown. Yet abundant trees, porches, and room for private gardens cast a sylvan glow over the place, such that despite a degree of density, one never felt trapped in a concrete jungle.

Still my friend wasn’t ready to glorify Capitol Hill in the planning textbooks. “Well, I don’t know, it’s a bit sprawly,” he replied. At first I was taken aback. The compact district was a far cry from any postwar American suburb, places that are the very definition of sprawl. Then I remembered that my friend was visiting from England; compared to the narrow lanes of Old World towns, the 19th-century neighborhood is indeed almost suburban. It is bisected by broad avenues and most lots even have room for small front yards. Though it was created before cars, the extra room has meant that it can accommodate them, albeit at a lower level than the average American suburb, where households often host more vehicles than persons.

I was reminded of this Atlantic cultural gap recently, when The Economist, a mainstay of elite opinion produced in Britain, declared that “The world is becoming ever more suburban, and the better for it.” The 5,000 word essay takes one on a whirlwind tour, providing a few case studies of suburban life across the broader Anglosphere: booming South India, the ever-expanding American Sunbelt, and postindustrial London belt towns. All of these places, the magazine reports, conform to data that shows the preponderance of urban growth taking place outside the old urban cores. But in its sweeping claim of a “great suburbanization,” the report seems to sidestep a central question: What is a suburb, anyway?

First we arrive in the new outskirts of Chennai, where The Economist reports that a new development could stand in as a Bollywood set for Southern California. After all, it is named “Lakewood Enclave,” a glib tribute to the postwar Los Angeles suburb where so many Baby Boomers, including my mother, were raised by their GI Bill parents.

The new Indian Lakewood is also home to a rising middle class, but in physical form would appear to be a much different place. Where the American Lakewood consisted mostly of detached, single-story homes, pictures of the Chennai suburb show homes more densely packed, all with at least a second floor, and far less outdoor space on each lot. Some of the houses abut five-story apartment blocks. While it may not have brownstone elegance and close proximity to downtown, Lakewood Enclave’s footprint seems closer to Capitol Hill than its Southern California ancestor. It may currently lack the scale and infrastructure of a more established community, but its relatively dense layout would seem to allow for at least one characteristic that is a fundamental part of the urban experience: walkability.

So it is somewhat surprising when The Economist puts the sprawl of Phoenix, Arizona, in the same category. Yes, both Lakewoods and the residential quarters of the desert city follow fundamental suburban patterns, excluding any noisy commerce or polluting industry and building in a uniform manner that enables quick, cheap construction. Yet Maryvale, a once prosperous Phoenix neighborhood that the report extols as a place where poorer families can afford to buy homes on relatively large lots, is part of a metro area that consistently ranks among the nation’s least walkable cities. Everyone needs a car, and many spend several hours a day commuting behind the wheel.

Maryvale is also an example of the economic rollercoaster of boom and bust often engendered by such speculative developments. Families seem to abandon them as quickly as they came, finding little to care about once the new suburb loses its original sheen or better prospects appear elsewhere. Perhaps this is simply the American way, or the result of market forces, but the abandoned infrastructure creates drawbacks—consider the waste and environmental disaster created by abandoned cities like Detroit—that planning officials could mitigate.

The problem with the suburb is not its location outside the urban core or primarily residential character. Instead, a lack of attention to form and aesthetic considerations has resulted in throwaway places that are not adaptable for future generations. In this vein, it is surprising that there is no reference in The Economist’s report to New Urbanism, a movement that in the wake of the failures of postwar Urban Renewal programs, is drawing on traditional forms to create or retrofit existing places that will serve multiple generations, accommodate a diverse swath of income levels, and not require a car for every errand or outing. (This last feature is particularly important for the developed world’s growing elderly population. My 95-year-old grandmother, not content to live among only older people in a retirement home, is now marooned in a California suburb.)

My own current neighborhood fits this definition of a suburb that lacks the negative aspects of postwar sprawl. A 20-minute train ride from the center of Philadelphia, it boasts a retail and small office district within a short walk of most homes. Built before the car displaced the railroad, it now offers multiple modes of transport—including one’s own two feet—and while our family has only one car, there are some residents with children who choose not to have even one. The Economist contends that “as suburbs come to seem more urban, the distinction between central cities and their suburbs is blurring…” But in the case of the prewar suburb, the blurring began long ago.

Lewis McCrary is Robert Novak Journalism Fellow at The Fund for American Studies.