We Turned Afghanistan Into an Opium Den

The country's economy has become dependent on the same drugs that are now killing Americans. This is our real legacy there. 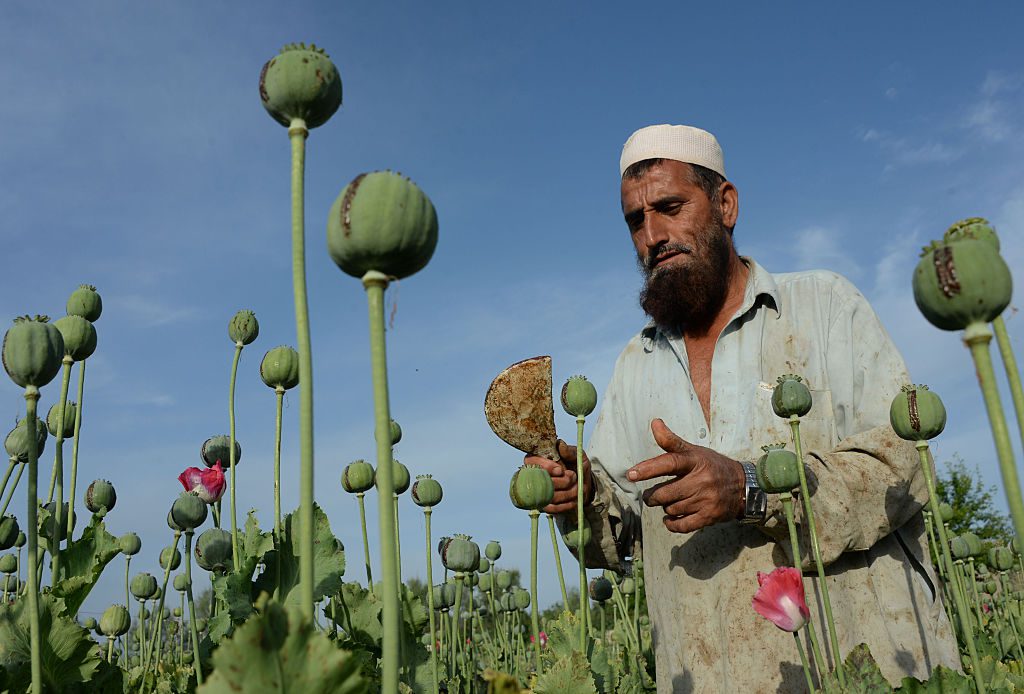 America is finally withdrawing from Afghanistan and the war hawks couldn’t be more displeased. Among the many arguments they’ve thrown at the dartboard in recent days is: Why should we leave when we were protecting Afghanistan on the cheap? For the unbeatable price of just $300 million a day and 2,500 troops, they say, the United States can continue to hold off the Taliban and guarantee that the government in Kabul doesn’t fall.

First of all, this isn’t actually true. Even when our boots were on the ground, the Taliban was still advancing, capturing rural areas where poverty and disillusionment with the American-backed government were high, even closing in on the major city of Kandahar. But beyond that, the costs of a 20-year occupation can’t be so easily contained and calculated. The consequences of the Afghanistan war are not limited to that country; they’ve reverberated across the region and even the globe. And one of those costs is a worldwide drug bonanza whose origins run deep into Afghani soil.

We set out in Afghanistan to build a liberal democracy. What we got is more like a heroin wholesaler.

At issue is a deceptively colorful flower, called the opium poppy, whose seed pods naturally produce opiates like codeine and morphine. These plants have been grown in Afghanistan for centuries, but it wasn’t until the 1980s that cultivation became especially widespread. That was when the poppies were turned into a wartime cash crop, used to fund the mujahideen resistance to the invading Soviets. Their cultivation was fueled further by heightened demand for opiates in neighboring Iran, which had effectively banned poppy and was then fighting a brutal war with Iraq. The Americans, focused on stopping the Russians at all costs, looked the other way. The result was that Afghanistan grew into a worldwide opiate supply hub.

Poppy initially flourished under Taliban rule, too, though by the late 1990s the group had realized it was presiding over a drug problem. In 2000, Mullah Omar, the head of the Taliban, decreed that growing poppies was un-Islamic and instituted a total ban across Afghanistan. The State Department initially expressed skepticism over this prohibition but indications today are that it was surprisingly successful (even as it was harmful to the Afghan economy). The Afghanistan Opium Survey estimates that, whereas poppy had been cultivated on 82,000 hectares of Afghan land in 2000, by 2001 that was down to a mere 8,000 hectares.

Then came the American invasion, the Taliban retreat, the rise of a new government, 20 years of occupation. Poppy growth exploded. By 2003, it was back almost to pre-prohibition levels, and by 2004, it was far higher. Worse, since poppy was grown in poorer rural areas, and since those same rural areas tended to feel alienated from the central state, the crop became a lucrative funding source for a resurgent Taliban. The United States and the Afghan government made efforts both to interdict the drugs and to forcibly eradicate the poppy crops. Yet not only did this fail, it bred enormous resentment against Kabul and drove even more farmers into the arms of the Taliban.

By 2009, the Obama administration had recognized that the anti-drug strategy in Afghanistan was a flop. Washington thus proceeded to defund centralized efforts to destroy the poppies and instead distributed money to local officials. Alas, this didn’t work either, and poppy cultivation in Afghanistan continued to climb. By 2014, John Sopko, the indispensable special inspector general for Afghanistan Reconstruction, was warning that America’s $7.6 billion campaign to fight Afghan poppy was one of the occupation’s greatest failures. “Production and cultivation are up, interdiction and eradication are down,” Sopko wrote, “financial support to the insurgency is up, and addiction and abuse are at unprecedented levels in Afghanistan.”

What the United States had done was to shackle the economic and political fate of a nation to an illicit drug boom. Not only was the Taliban insurgency reliant on opium, so was the government, which desperately needed the revenue and whose corrupt officials were ever eager to make a profit. The agriculture sector was also thriving on poppy, which is both more lucrative and more labor-intensive (creating more employment) than wheat, the country’s staple crop. The situation had gotten so bad that by 2018, the U.N. Office on Drugs and Crime was estimating that poppy production and the trafficking of opiates accounted for between 20 and 32 percent of Afghanistan’s entire economic output. Meanwhile, the number of hectares on which Afghan poppy was being grown had quadrupled since 2000.

So it was that Vanda Felbab-Brown, a senior fellow at the Brookings Institution, told the British Parliament last year that “perhaps nowhere in the world has a country and the international community faced an illicit drug economy as strong as the one in Afghanistan.” Estimates as to how much of the global heroin supply originates in Afghan fields range from 85 percent to 90 percent. And while drugs in the United States are still more likely to come from Latin American crops, the Atlantic Ocean can’t shield us in full from the opiate boom we helped unleash. This is our real legacy in Afghanistan: a narco-state fueling addiction and death, a drug hub that makes 1990s Colombia look like a rehab center.

The most devilish part is that, even if there were a way to somehow curb these narcotic outflows, doing so would undermine the same Afghan poor we’ve supposedly spent the past two decades trying to help.

So what happens now? As American armed forces rotor out of Kabul, all eyes turn to the Taliban to see whether they’ll once again try to ban poppy. The group will likely be pulled in two directions. On one hand, they seem keener for international legitimacy than they were before, which, in conjunction with their puritanical beliefs, could see them crack down on poppy. On the other hand, opium is far more interwoven into Afghanistan than it was the last time they tried to ban it. There’s also the question of how much longer poppies can remain as valuable as they are, given the competition opiates face from synthetic opioids like fentanyl.

Yet whatever happens, we should always remember which substance it is that we’re talking about here. This isn’t marijuana or cocaine or some flash-in-the-pan trend like bath salts. This is heroin, opiates, the cause of a medical crisis here in the United States that’s undone entire towns and roiled our politics. America is undermining Afghanistan? Afghanistan has undermined America, as well as Europeans, Asians, and so very many others. Regardless of what you think of our so-called war on drugs—and I think very little—we can all agree it’s a bad thing to have a single nation flooding opiates onto the international black market.

This is what 20 years of American blood and dollars have purchased. An expedition to export democracy abroad has yielded a nation that exports one of the world’s most addictive substances.