Register now for the New Internationalism conference on 6/17. 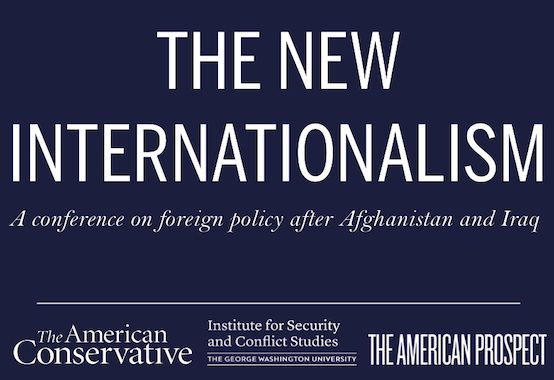 On June 17, The American Conservative will convene leading thinkers from across the political spectrum at George Washington University for a wide-ranging conversation about American foreign policy after the War on Terror.

The goal of the New Internationalism conference is to address America’s role in the world after Afghanistan and Iraq, and to discuss alternative visions for protecting America’s core security and economic interests in the new global framework.

The American Conservative and our co-sponsors The American Prospect and the Institute for Security and Conflict Studies at GW will build on the emerging consensus that favors prudence, the rule of law, and diplomacy. We hope you can join us!

For more information and to register, visit theamericanconservative.com/newinternationalism. The event schedule is after the jump:

8:45am Threats and Responses: How the U.S. can maintain stability in the long term without war.

12:15pm Political Realities: Prospects for realism and reform in a new economic and political environment.

The conversation will continue in the coming weeks thanks to our partners at Bloggingheads.

Emile Doak January 13, 2021
The American Conservative’s new executive director lays out his vision for the magazine and the movement.

The Editors November 5, 2020
Beyond 2020: The Future of Realism and Restraint in a Chaotic World
Advertisement
Advertisement