A Fairfax County school chooses race-based admissions, as though access to learning is the same thing as learning. 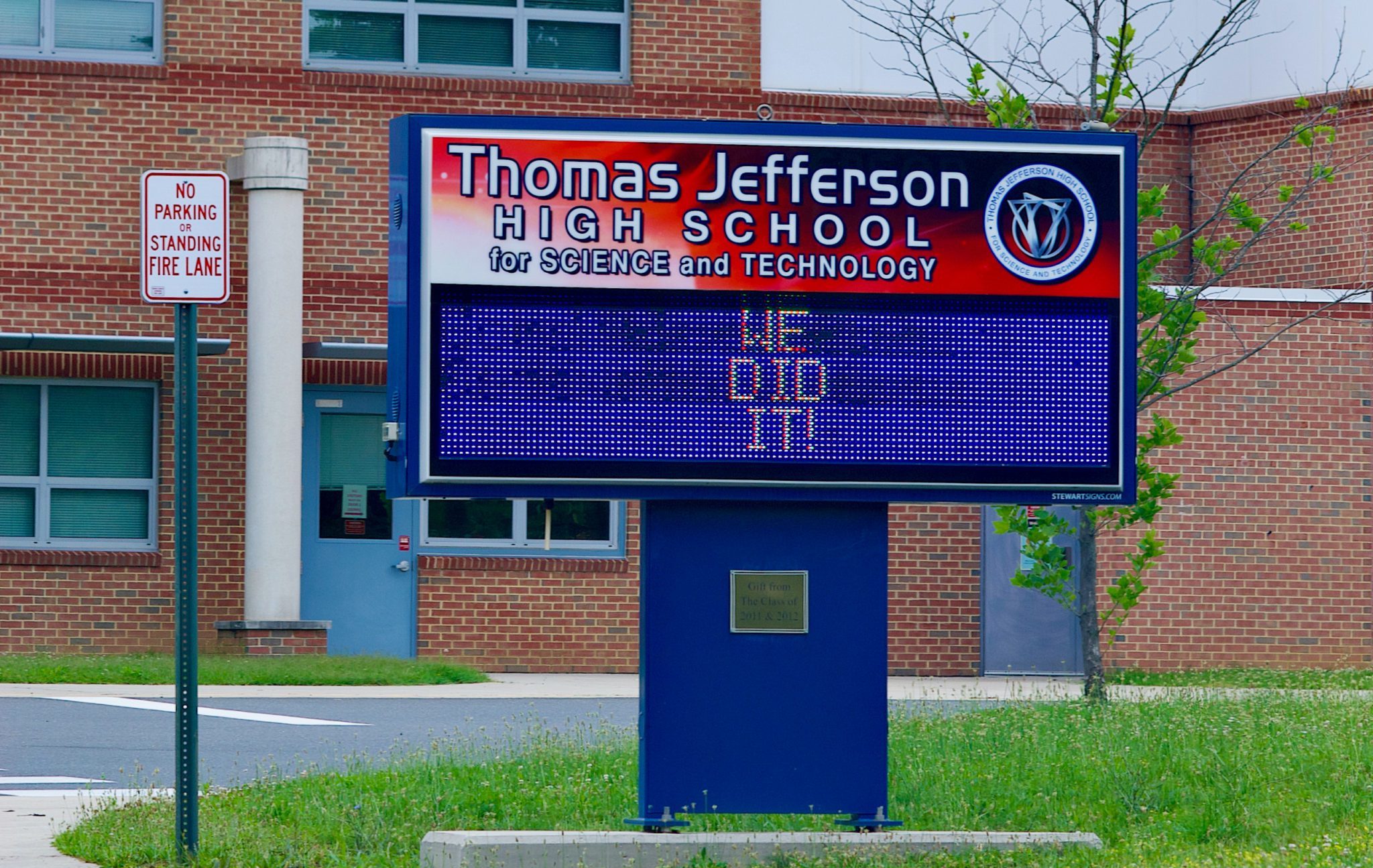 Ground Zero for wokeness is Fairfax County, Virginia. It is 65 percent white and votes solidly Democratic. The median income is over $124 thousand. I used to live there; it was common to hear white people brag about having black friends (at work, you know, not the kind that come over to the house) and worry about whatever the issue-of-the-week was on NPR. Hell, with the county’s proximity to Washington, D.C., people there work for NPR.

The jewel in Fairfax’s public school system is Thomas Jefferson High School for Science and Technology, known to all simply as “T.J.” It is not an exaggeration to say T.J. is a critical part of America staying ahead of other national economies. T.J. is widely considered the best STEM high school in the country.

Things worked well at T.J. until about a year ago, based on the fact that the only way in was to pass a very competitive entrance exam. Entry into T.J. meant you were a smart kid with the discipline to put in hard hours with no guarantee of success, a perfect definition of those who would also go on to succeed at MIT.

The problem was the dang Asians. As many as 73 percent of students admitted to Thomas Jefferson High School were Asian. Some locals felt black and Hispanic students were underrepresented, as typically only about 2 percent of T.J. students were black. The solutions were: a) To improve all middle schools in the area so they better prepare their kids to compete to enter T.J.; b) Offer all students rigorous after-school accelerated STEM programs; or c) Just lower TJ’s admission criteria to balance out the races in line with progressive politics.

Yeah, they did C. The crazy-hard T.J. entrance exam was replaced with

A holistic review…of students whose applications demonstrate enhanced merit…Students will be evaluated on their grade point average (GPA); a student portrait sheet where they will be asked to demonstrate Portrait of a Graduate attributes and 21st century skills; a problem-solving essay; and experience factors, including students who are economically disadvantaged, English language learners, special education students, or students who are currently attending underrepresented middle schools. (Emphasis added)

Experience factors? That basically opened the door to that criterion being “whatever we say it means.” The result at T.J. was a drop of more than 11 percent in the number of Asians, and double-digit growth on the part of blacks and Hispanics, achieved by making being poor a check-off for acceptance. No one cares white students account for only 22 percent of admissions, despite being 65 percent of the county population.

This is all the crudest kind of racist thought, the same as practiced by the KKK, thinking all blacks are alike. Progressives act as though everything is fixed if schools just sling a couple more darker-skinned kids into the back row come class picture day.

But is it racism? Seems so. One school board member texted another, “I mean there has been an anti-Asian feel underlying some of this, hate to say it lol,” according to correspondence obtained by non-profit Parents Defending Education. In another exchange, Thomas Jefferson’s admissions director asked a school district official if she could “provide us a review of our current weighting (of experience factors) and whether or not this would be enough to level the playing field for our historically underrepresented groups.” The official replied, “My gut says that you may need to double all the points so the applicants can receive up to 200 points overall for these experience factors.” Another school board member wrote we “screwed up TJ and the Asians hate us,” to which another responded he was “just dumb and too white” to address the diversity deficit properly.

The school then went further. There will now be three different “pathways” for admissions: the first for 350 high-performing students, the second for 100 students judged on a combination of half academic merit and half external factors, and 50 underrepresented students. Some people in town call them the yellow, brown, and black lanes.

We’ve gotten so twisted by thinking America is shackled by systemic racism that we built a system of education admissions on a foundation of systemic racism. We somehow think racially gerrymandering schools is a solution. We ignore John Roberts’ dictum,”The way to stop discrimination on the basis of race is to stop discriminating on the basis of race.” Why are we so hell-bent on self-harm as to sacrifice our education system on layers of false progressive assumptions?

The first false assumption is access to learning equals learning. A student has to be prepared intellectually to succeed, or he fails, or the institution is forced to dumb down to accommodate him. Progressive education thought demands people publicly disavow what we all know to be true, that some students are smarter and work harder than other students. We are absolutely not all alike. Imagine if colleges chose who would play on their football teams based not on athletic skill but racial quotas? Who knew schooling was only skin deep, and the football team more intellectually honest than the philosophy department?

The next false assumption is the magic number: X percent of the population is black so X percent of the student body should be black. If it is not, the thinking goes, de facto some form of systemic racism must be at play. This typically focuses on the admissions process (to include testing, like the SAT) and thus the answer is to scrap every part of the admissions process that seems to rub against that X percent. You don’t have to show question 27 on the SAT is itself “racist,” only that the SAT results won’t get X percent of black kids into Harvard and must ipso facto be racist. So, let more black kids into Harvard by eliminating the SAT and that will result in more black doctors and lawyers and a more just society. Problem solved.

Well, sort of. There still is that issue of the fact getting admitted to Harvard is not the same as graduating from Harvard; a student still has to understand the classes and put in the hard work of studying, that important form of delayed gratification. And Harvard only has so much space so to let in more black kids means saying no to others. In most progressive instances, that means telling “Asians” to go away (the term “Asian” itself is yet another false and disrespectful assumption, that somehow Chinese, Thais, Japanese, Koreans, Filipinos, Laotians, Indians, Bangladeshis, et al., are lumpable into one omnibus racial garbage can.)

What you’re left with is the certainty that more exclusion by race is the answer to the alleged problem of exclusion by race. After some 40 years of seeing something that egregiously dumb as a good idea, the issue is now coming again before the courts for a reality check, starting in Fairfax County, Virginia. Someone in the process may decide it’s time to ask why we regularly end up with “cosmetically diverse” institutions, rather than anything real that leads to broad social progress.

A group calling themselves the Coalition for T.J. sued the school system to reverse the admission process changes, which they allege were meant to diminish the number of Asian students. That qualifies as discrimination based on race, outlawed under the 14th Amendment, they claim. In January, a U.S. District judge turned down the Coalition’s request for a jury trial and will instead issue a ruling later this year. Both sides will then be able to appeal, suggesting the issue will overlap another admissions season. A second suit is also in play. A bill before the Virginia legislature would also affect T.J., seeking to remove race as an admission criteria.

The move to eliminate racism in admissions processes in Virginia is mirrored at the national level. The Supreme Court agreed to decide whether race-based admissions programs at Harvard and the University of North Carolina are lawful.

The case against Harvard accuses the school of discriminating against Asian students by using subjective criteria such as likability, courage, and kindness, a nasty echo of the 1930s when it was thought Jews lacked the “character” to be Harvard men. In the North Carolina case, the argument is simply that the university discriminated against white and Asian applicants by giving preference to P.O. other C. Don’t expect a decision before next year.

Once upon a time, Americans decided race should not be a factor in education, doing away with segregated schools and ending separate but equal. Somewhere we lost our way, to the point where we are leveling down, and twisty definitions of things like “experience points” have brought race directly into education again. Only this time we convinced ourselves that discriminating against whites and Asians was perfectly okay. That thinking is under fresh attack in the courts, and well it should be.