The Marines are emulating 'Ender’s Game' and the Army is dreaming of 'Starship Troopers.' The taxpayer should be looking for an exit. 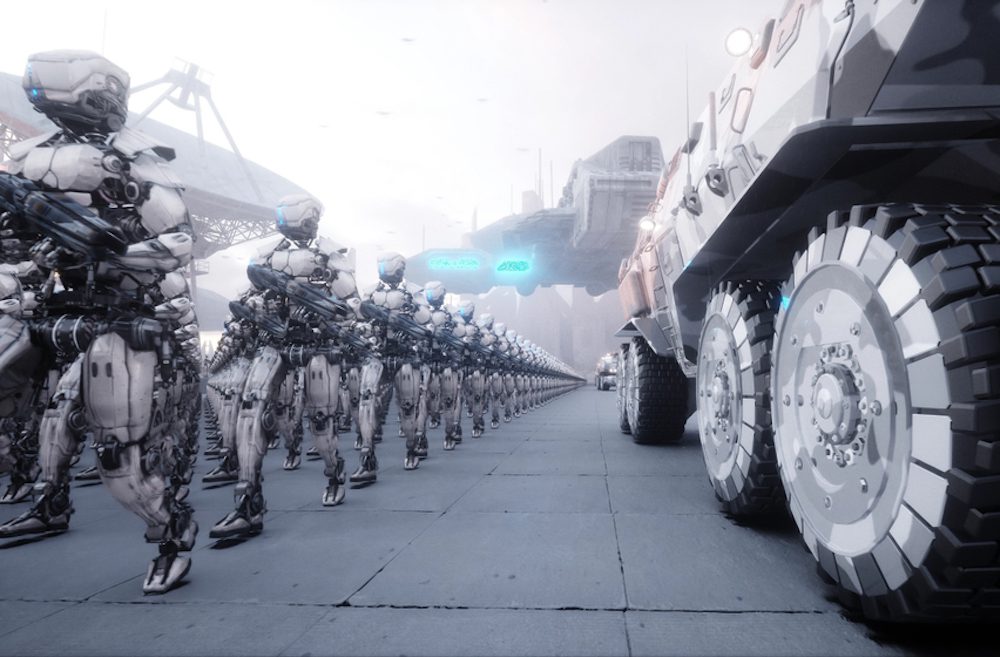 The battle fleet was in position. Pitching and swaying to the rhythm of the open sea, the “Mother Ship” initiates her attack sequence. On command, unmanned aerial drones and waterborne minesweepers deploy from several smaller ships and initiate a search pattern ahead of the primary invasion force. Locating enemy missile sites, troop concentrations, and beach defenses, targeting information is relayed to the waiting fleet.

Despite being strung out across many nautical miles of desolate ocean, the fleet and her drones, troop connectors, and aircraft are all seamlessly networked. This enables flawless command and control, but most importantly, timing of the operation. The enemy defenses are weakened to a point deemed acceptable by the fleet’s AI commander, and the final “over the top” order is given. Undersea drones, fast attack boats, armored troop connectors, and unmanned helicopters deploy by the hundreds from their respective ships and commence a coordinated, massed assault on the enemy beach.

Sounds like science fiction, right? However, this hypothetical scenario is not set in the distant future; it is the Navy’s and Marine Corps’ latest vision for warfare in the 21st century.

But should America come to blows with near-peer state competitors, such as China or Russia, does this vision adequately prepare the United States to prevail? Even if we could create science fiction, should we? Unfortunately, due to a poisonous, dynamic combination of child-like faith in the wonders of military technology and the cloying influence of the military-industrial-congressional complex, this future vision is myopic at best, and downright dangerous at worst.

The military services and the defense establishment have become enamored with new technology and its promise of lightning fast, low-cost victories. This trend originated with the “Revolution in Military Affairs”, or RMA, a coin termed by founding director of the Pentagon’s Office of Net Assessment, Andrew Marshall, following the dazzling victory of coalition forces in the first Gulf War.

As described in Andrew Bacevich’s book The New American Militarism, the goal of RMA was “to move war out of the industrial age and into the information age.” Indeed, the victory of Desert Storm was a “remarkable milestone in military history.” Marshall believed that the future was the “creation of forces that were lean, nimble, and above all, “smart.” Seems reasonable enough, the enemy will have technology, and we counter it with better technology, right? The problem is this has not worked out so well over the last 18 years. Just as Fukuyama’s “end of history” turned out to be off the mark, so it is with the RMA and technology in warfare.

If future amphibious assaults will be conducted primarily via a complex interconnected network of swarming drones, Marines will be relegated to second class citizens in their own service. And at the end of the day, it is people that matter most in war, not machines. Just ask the Taliban why their sandals and AK-47s are besting Predator drones slinging Hellfire missiles. Military strategist and Air Force Colonel John Boyd once remarked that hardware isn’t enough. In Vietnam, he said, “we had air superiority, land superiority, and sea superiority, but we lost.” His insights and ideas, which provided the intellectual groundwork for the successful F-16, F-15, and F-18 aircraft, can be summed up with the motto “people first, ideas second, hardware last.”

Turning future conflicts over to machines sounds great on paper. It jibes well with our technology savvy populace. Computers and drones don’t have to practice, we can just program them to do our bidding. Get the hardware off the shelf, turn it on, plug-n-play, push the button, run the .exe file, it should all work as seamlessly as our smartphones and computers.

In the science fiction novel Ender’s Game, a communication technology known as the Ansible afforded fleet commander Ender Wiggin the capability to instantaneously communicate with his fighters and transports which were light years away on enemy territory in deep space. This allowed for zero delay between his commands and the fleet’s reaction to present battles as they unfolded. But in the real world, as any service member can attest, “comm” is hardly reliable. Even during peacetime exercises without a thinking enemy injecting friction or frequency jamming, communications seems to malfunction regularly.

An “integrated network” of thousands of ships, drones, and connectors would be subject to the same friction. A Marine jarhead who can recall his commander’s intent, seize objective A, neutralize enemy position B, etc., is useful even if his radio fails to work. A drone that loses comm with the “Mother Ship” is not. Marines take initiative, machines don’t.

And most importantly, whether the Marines have a rifle or an Xbox controller and a gamer headset, it isn’t clear when or how they will get reps and sets with a 35,000 ship Navy. Just as a high school football team needs a field, cleats, and pads during the week to practice for Friday night, so too does the military need time, space, resources, and practice. Sending in the robots makes it seem as if war preparation will be equivalent to the as seen on TV showtime rotisserie barbecue where you simply “set it, and…forget it!”

The Marine Corps isn’t alone in their search for technology. If the Marine-Navy team is emulating Ender’s Game, the Army is dreaming of Starship Troopers. Recently they have showcased an exoskeleton to help soldiers carry more weight, a third arm to hold heavy weapons, and a heads up virtual reality-like display to enhance situational awareness. Again, these gadget pitches are all within the broader strategic context of non-stop military defeats since 9/11. The blame isn’t solely with the military. Why they persist leads to the second dynamic producing the science fiction scenario of warfare: the military industrial congressional media complex.

President Trump’s National Security Strategy, written by Generals molded during the Cold War was released in December of 2017 and focuses on a return to great power competition with “near peer” revisionist threats named Russia and China. It is within the context of this strategy that the Marine Corps and other services can wrap their tactical minds around what big war looks like. It fits nicely with what the services have been doing since the end of World War 2: waiting for the Super Bowl.

Assuming the strategy is sound, the question still remains, especially with China, where and over what would we come to blows and require an amphibious force of thousands of attack boats and drones? For the Senkaku island chain, disputed between China, Taiwan, and Japan, the largest island of the eight, by far, is Uotsuri-shima (pictured here). It is 1.6 square miles in area and resembles a mountain ridge. In 1945 a small island that could put bombers in range of Japan had strategic value. In 2019 a few small rocks in the middle of the ocean, not so much.

The fact is, nuclear armed states never fight each other in a conventional, gloves off, war of attrition. No examples can be found. It has never happened, nor will it ever unless by accident. Since China and Russia fit the bill, a strategy predicting a potential conventional conflict with these countries is detached from reality and is only driven by the Swamp. Defense contractors still need to outfit a massive war machine, the Congress needs to pacify their pork districts, the populace needs to feel good about their snap and pop, shiny military, and the state’s ministry of war propaganda in the media must continually warn the American people of Russian bombers flying somewhere near Alaska. As the old saying goes, the show must go on.

The repercussions of this misalignment are not yet known. A grand looking Church is doomed to failure if the foundation is laid incorrectly. So it goes with strategy. Germany was tactically by far the most powerful in both World Wars, but her strategy was doomed to failure from day one. Today the United States Marine Corps and Navy are determined to build a tactically untested and science fiction inspired force upon the foundation of a crony capitalist national security strategy as provided by the Congress and President. Only with a true bi-partisan reform movement that honestly and accurately assesses threats can the military embark on building a tactically sound force.

Until then, may the search for the next Ender Wiggin commence.