Proud to Be Right: Voices of the Next Conservative Generation, Jonah Goldberg, ed., Harper, 272 pages By Daniel J. Flynn The 22 intelligent young essayists from “the dumbest generation” who contributed to Proud to Be Right might require translation for the older reader, especially when one remembers previous conservative rallying cries such as “Who Promoted […]
Daniel J. Flynn

Proud to Be Right: Voices of the Next Conservative Generation, Jonah Goldberg, ed., Harper, 272 pages

The 22 intelligent young essayists from “the dumbest generation” who contributed to Proud to Be Right might require translation for the older reader, especially when one remembers previous conservative rallying cries such as “Who Promoted Peress?” and “Don’t Immanentize the Eschaton.” A time-travelling ’50s-era right-winger would feel lost reading essays on gay conservatism and the cult of self-esteem. And could even the chain-smoking antistatist Ayn Rand have envisioned the need for a defense of smoking against governmental encroachment? The issues have evolved, and thus so has conservatism. We’re not called “reactionaries” for nothing.

For anyone present at the creation of movement conservatism, James Poulos’s broadside against “professional conservatives” would probably be the most startling entry in Proud to Be Right. Conservatism appears in the essay as an industry in which a Washington-New York coterie makes its living identifying the party line and then faithfully following it. 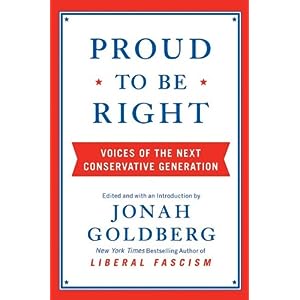 Deviation from the line doesn’t result in a loss of life, as it did in Communist Party oligarchies, but in a fate fitting for a free-market society: the loss of livelihood, including direct-mail revenue, foundation bequests, page views, friendly reviews, and ratings. Fidelity to the line, more than talent, determines one’s rewards within the movement. So caustic is the piece that the reasoning of Evan Coyne Maloney’s neighboring contribution—about dissent from “socially transmitted opinions” on college campuses—could seamlessly change places with Poulos’s arguments against careerist conservatism.

The fact that “professional conservatives, as a rule, are more wholly and comfortably committed to their outfit and its practices than the average Marine is to his reinforces the prejudice that professional conservatism is a closed system,” Poulos writes. Surely Ludwig von Mises, finding in his adopted homeland only an untenured professorship at NYU unfunded by the school, and Russell Kirk, who quipped that he would have been “better off frying chicken for Colonel Sanders’s heritors” after paying contributors to Modern Age out of his pocket, didn’t adopt their beliefs as an exercise in careerism. But times have changed.

Poulos contends that “amid the endless disruptions of the ’00s, movement wonkery and punditry attained such a preternatural flatline in their ‘message discipline’ that people who were not conservatives for a living could be excused for mistaking caricature for reality.” He continues, noting that “even within the industry, the suspicion can no longer be dismissed that some of conservatism’s marquee institutions and personalities are too vulnerable to the sort of contemptuous ridicule enjoyed by regular people who are certain that conservatives—professional conservatives, above all—must be unfit for life off the reservation, unable and unwilling to function in any truly human environment.”

Poulos’s argument is the latest affirmation of Eric Hoffer’s observation, “What starts out here as a mass movement ends up as a racket, a cult, or a corporation.”

A generation coming of age during the last decade—when the advocates of a limited-government philosophy became the lapdogs of a big-government president and traditional conservative warnings against international busybodyism begat taunts of “unpatriotic”by professional conservatives—can be forgiven for its cynicism toward the conservative movement, a phrase now as archaic as “Who Promoted Peress?” or “Don’t Immanentize the Eschaton.” The conservative movement exists today in the way the civil rights movement exists: as a party vehicle, a better-fed corruption of its former self, waxing nostalgically for yesteryear’s symbols while largely forgetting yesteryear’s principles.

If one buys Poulos’s argument, then Proud to Be Right offers some reason for optimism. The collection’s editor, Jonah Goldberg, posits that “the strength of conservatism for the last three-quarters of a century has been its disagreements, not its agreements. Conservative dogma remains as unsettled today as it was a generation ago.”

The book Goldberg edits is nothing if not an exhibition of this intellectual diversity. The essays come from all directions, and the reader obtains some enlightenment regarding the complex, competing strands of conservatism. But he does not come away equipped to answer the question “what does a conservative believe?”

What do Matt Patterson, who dubs Lucifer “a republican saint for his refusal to bow before a monarch” and finds Lincoln a more worthy “earthly messiah” than Christ, and the homeschooled Caitrin Nicol, who labels the ubiquitous “Coexist” bumpersticker “stupendously annoying,” have in common? Where does the conversation begin for Nathan Harden, a “deviant” prude in the context of the “hypersexualized” student culture at Yale, and fellow Yalie James Kirchick, who rails against “homophobia” of the kind “heard at assemblies of the Christian Coalition or fringe groups devoted to rolling back the political progress gays had made”? Why is Matthew Lee Anderson’s contention that “economic libertarianism doesn’t sit well with the broadened aims of a newer social conservatism” included in the same book as “Conservatism for Punks,” whose author, Todd Seavey, claims that “this country’s DNA makes us freedom-loving first and foremost”? The inability to reconcile such conflicting positions under the rubric of “conservatism” is less a point of confusion for this book than it is a reality for the Right.

Our strengths can also be our handicaps. It is a benefit that there is no conservative pope formulating official doctrine and excommunicating heretics. It is a weakness that conservatism is so amorphous that so many disparate—indeed, conflicting—outlooks huddle under its banner. What defines something that seems to mean virtually everything? In the wake of the passage of Obamacare, conservatism as a brand has never been more popular. But it would be difficult to claim the same about the principles that allegedly undergird that brand.

The ascendance of conservatism the marketing label has coincided with definitional instability. Clearly, conservatism means dramatically different things to different people. Popularity has come at the expense of coherence. But if conservatives can’t conserve their own philosophy, what are the prospects for their more grandiose aims of conserving the Republic?

Consider the inclusion here of essayist Joel Pollak. So fervent a liberal that he won election to the leadership of Harvard Law’s Democratic Party auxiliary, Pollak toyed with the idea of penning speeches for Barack Obama during his 2008 campaign. In 2010, he was the Republican nominee for Congress in Illinois’s 9th district and is touted in Proud to Be Right as a voice of young conservatives. Replenishing the ranks with the other side’s disillusioned is a good idea; taking your marching orders from them is not. An intellectual inferiority complex seems to compel conservatives to advance as spokesmen any and all men of the Left who turn rightward. The result of this may be displacement rather than assimilation: to what degree have these periodic influxes of liberals into the ranks of conservatism made it resemble earlier versions of liberalism? Then again, Frank Meyer, Max Eastman, Whittaker Chambers, James Burnham, and Ronald Reagan worked out well.

Perhaps Pollak will similarly become a valued thinker or leader on the Right. Or he might wander into some other movement two years from now; worse still, he might maintain a conservative identification while pushing many of the same ideas he held as a young Democrat not so long ago. If conservatism is a strictly political movement, additions can only be welcomed. But if it is something more than a numbers game—anything as ambitious as a philosophy of life or as modest as a general attitude—then the increased supply of conservatives, insofar as it results in the dissolution of conservatism, can’t be viewed as an unmitigated boon.

The flaws of Proud to Be Right are the flaws of youth. There is the occasional confusion of the transitory for the enduring—the first essay begins, “Before there was Sarah Palin, there was Mike Huckabee.” Few of these writers on conservatism exhibit any evidence that they are also readers of conservatism. And youth’s fetish for the personal narrative, perhaps here editorially imposed, leaves the reader groaning ay-ay-ay at the frequent appearances of “I.”

What shines is the scribblers’ flair. Levity abounds. “The best way to convince someone you’re right is to make what you’re doing look good,” Helen Rittelmeyer explains, “and a cigarette properly held goes a long way in that direction.” Todd Seavey is perplexed by the hipster’s embrace of political slogans in light of his cynicism toward corporate marketing: “If TV is lying to you with its advertisements, what on earth is the government doing when it promises to end poverty or racism?” Michael Brendan Dougherty can put a clever phrase to page, dubbing the Iraq War with its dubious justifications “a casus belied,” John T. Flynn and Felix Morley “conservatives before the movement,” and today’s begrudging appreciation of yesterday’s losers as “a bipartisanship of the past.” Juxtaposing the family-values furor over Murphy Brown’s single motherhood with the yawning reaction to the recent Pentagon arrest of an army cook who opted to raise her toddler instead of going to Afghanistan, Dougherty notes of the television character: “If only she wore combat boots.”

Amid its cacophony of voices, Proud to Be Right leaves the reader debating whether the future of conservatism is saved by its unwieldy diversity or doomed by its rigid orthodoxies. James Poulos persuasively makes the case that conservatism has embraced a company mentality of conformism. Yet his argument is surrounded by divergent essays that collectively say otherwise. Like most good books, Proud to Be Right provokes rather than settles an argument.

Daniel J. Flynn is the author of A Conservative History of the American Left.

If you enjoyed this essay, please make a tax-deductible donation to keep The American Conservative going strong.