The Houthi designation is the most destructive part of Pompeo's scorched earth campaign, and it is the one that needs to be undone first. 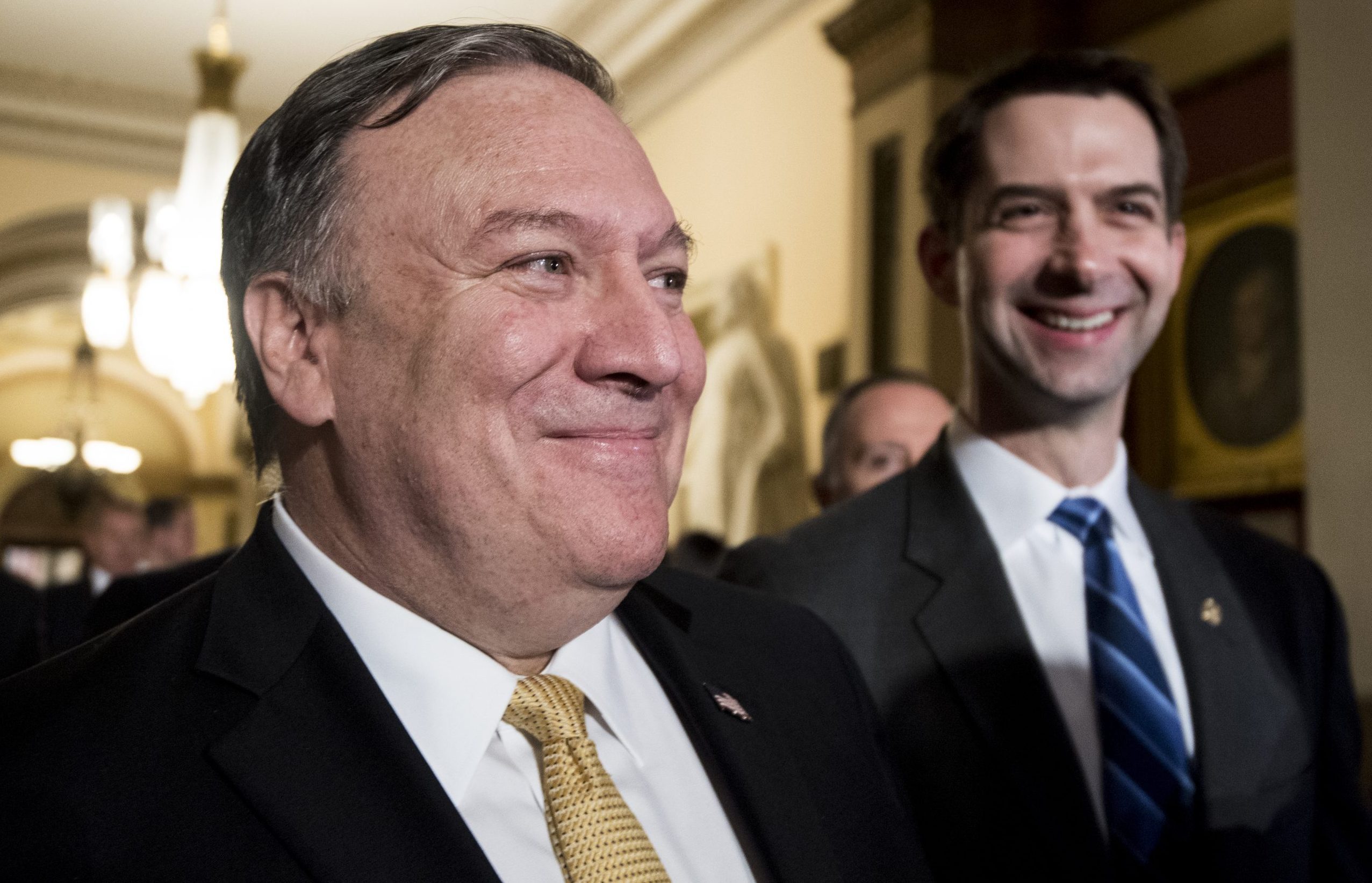 Paul Pillar comments on Mike Pompeo’s latest string of destructive acts and dishonest claims as Trump’s term comes to an end. Here he addresses Pompeo’s distortions and exaggerations of the relationship between Iran and Al Qaeda in a speech delivered on Tuesday:

To achieve a trifecta of abuse of the terrorism issue, Pompeo has picked this same week to foment a misbelief that Iran and Al-Qaeda are, in Pompeo’s words, an “axis” and “partners in terrorism.” If this sounds a lot like an earlier supposed partnership between Al-Qaeda and another Middle Eastern state starting with the letter “I” — as well as an earlier “axis of evil” — it should. The Iranian regime, Shia and Persian, is no more of a partner with Al-Qaeda than was the secular regime of Saddam Hussein. Iran and al-Qaeda have been on opposite sides of almost every political, ideological, military, and sectarian divide, as manifested in Afghanistan, Syria, Yemen, and elsewhere.

The presence of some Al-Qaeda types in Iran, mostly under a kind of house arrest, has been known for years and reflects a modus vivendi between enemies rather than anything approaching a partnership — see Michael Hirsh’s fine summary of the issue. Pompeo is presenting nothing new.

Describing the relationship between Iran and Al Qaeda as an “axis,” as Pompeo did, is every bit as dishonest and ridiculous as it was when George W. Bush included Iraq and Iran as part of the so-called “axis of evil.” It is fitting that Pompeo’s description echoes that of Bush, because the claim Pompeo is making is little more than reheated Bush-era propaganda that Iran hawks have periodically tried to promote. Every time Iran hawks bring up this nonsense, it gets shot down very easily because their distortion of the evidence is so obvious. The New York Times reports:

Mr. Pompeo spoke alternately about Al Qaeda’s “new home base” and a “new operational headquarters” in Tehran, bewildering counterterrorism officials, who said there was no evidence for his assertions. Some said his comments appeared to represent his own analytic conclusions, rather than those of the United States intelligence community.

Pompeo went so far as to declare that Iran is the “new Afghanistan” for the terrorist group, which is also nonsense. He is telling these lies in the hopes of throwing up more roadblocks to U.S. reentry into the JCPOA, but it isn’t going to work because his claims are false. Iran holds some members of Al Qaeda as hostages and bargaining chips in order to protect themselves against attack, but they do not work with them or sponsor them. They hold these people as an insurance policy for their own security. It takes willful ignorance or anti-Iranian fanaticism to interpret it as anything else. In Pompeo’s case, it is definitely the latter. As Matthew Petti pointed out in his report on the speech, relations between Iran and Al Qaeda are antagonistic and not the cozy partnership that Pompeo imagines:

But Lahoud, who studied the same documents, found just the opposite. She published a study in 2018 showing that al-Qaida “views Iran as a hostile entity,” and points out that members of the group were mistreated and even died in Iranian custody.

There are governments in the region that support and arm local Al Qaeda affiliates and other like-minded groups, but unfortunately for Pompeo they are U.S. allies and clients.

The decision this week to add Cuba back onto the list of state sponsors of terrorism is entirely without merit. Pompeo’s justification for designating Cuba was “exceptionally thin,” as Pillar says, and he is doing it purely for partisan political reasons. It is a sop to Cuban exiles in the U.S., just as the decision to designate the Houthis was a sop to the Saudis and the UAE.

The Houthi designation is the most destructive part of Pompeo’s scorched earth campaign, and it is the one that needs to be undone first. Mark Lowcock, the U.N. humanitarian aid chief, has warned that Pompeo’s malevolent decision to designate the Houthis as terrorists will condemn Yemen to the worst modern famine in decades:

The US designation of the Houthi movement in Yemen as a terrorist organisation is likely to lead to a famine on a scale not seen for 40 years, the UN’s most senior humanitarian official has said.

Mark Lowcock, director general of the United Nations Office for the Coordination of Humanitarian Affairs called for the decision to be reversed, saying the cost of food was likely to rise by as much as 400%, way beyond the reach of many aid agencies.

It is extraordinary for Lowcock to single out the actions of one of the five permanent Security Council members. It is a measure of how destructive the Houthi designation will be and how terrible the resulting famine could be that he is openly criticizing the U.S. action and calling for it to be overturned. The Houthi designation is by far the worst thing that Pompeo has done as Secretary of State, because if it is not quickly reversed it will lead directly to the deaths of tens and possibly even hundreds of thousands of people. It takes severe cruelty to look at a war-torn, famine-stricken country that depends heavily on outside aid and imports and then choose to suffocate the survivors with additional economic warfare. That is what Pompeo has done, we shouldn’t forget that.

He seems to have made the decision to designate the Houthis without alerting Congress in advance and without doing any of the work needed to facilitate humanitarian carve-outs to mitigate the damage done by the designation. Jack Detsch and Robbie Gramer report on the briefing between administration officials and Congressional staffers that happened earlier this week:

Staffers on the call said they’d “never heard staff drop f-bombs on an official call like this,” according to a source briefed on the call. At points, staff interjected and interrupted the briefers and accused the department of misleading Congress.

“You need to stop fucking lying to Congress,” one staffer snapped, according to two sources familiar with the call, when they pressed administration officials on why they hadn’t briefed Congress in the months leading up to the designation. Foreign Policy first reported that the designation was imminent in November 2020.

“On Yemen no one could point to a single positive concrete action coming as a result of the designation,” said one aide.

The Trump administration’s approach to using sanctions and terrorist designations has always been purely punitive and destructive. We have seen this with the “maximum pressure” campaigns on Iran and Venezuela, and more recently we have seen the same thing with Syria sanctions. They are not using these weapons to achieve a discernible goal, They wish to inflict as much pain and destruction on the target country as they can, and the massive harm done to innocent civilians doesn’t matter to them in the least. The Houthi designation may be the most ghoulish of them all, because it targets a country that already suffers from the world’s worst humanitarian crisis and it promises to make that crisis vastly worse.

There is good reason to expect that the Biden administration will reverse Pompeo’s destructive decisions as soon as they can, but in the interim aid and trade will be disrupted and innocent people will die preventable deaths. Pompeo’s most lasting legacy as Secretary of State is that of a man who used his time in high office to starve children and deprive sick people of essential medicine.