Assailed by Azerbaijan and Turkey, a place literally overlooked by the world struggles to maintain peace and human rights. 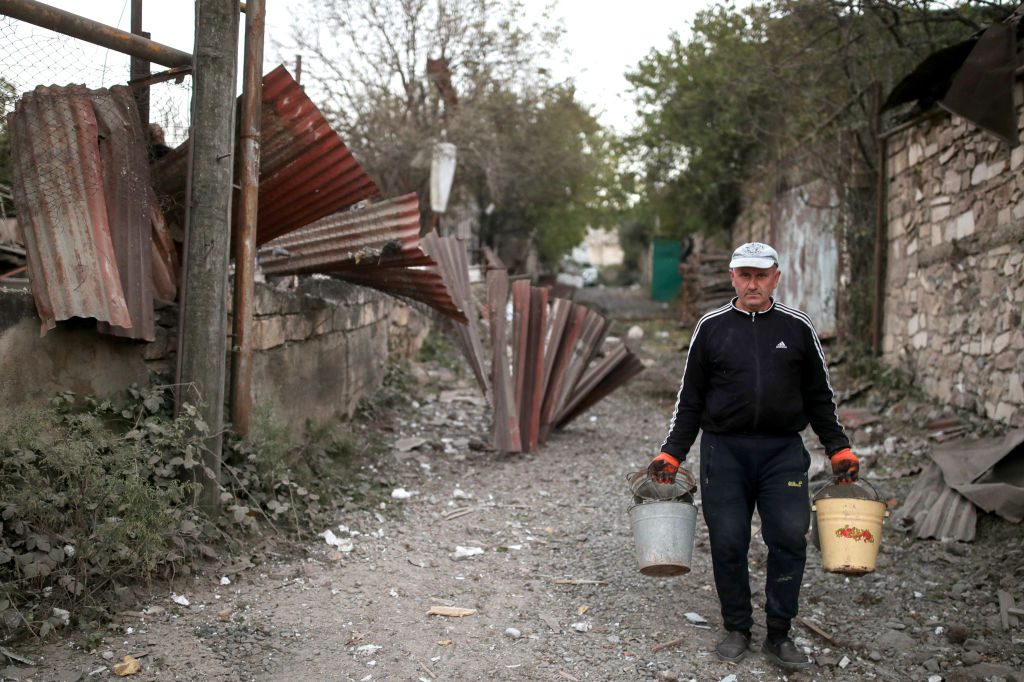 When I was six years old, I played with a landmine in our yard and lost my eyesight as a result. Even then, the irony wasn’t lost on me. The republic in which I lived was invisible anyway. It could not be found on maps. It was not recognized by any nation of the world. Paying it a visit could get you banned from the country next door, even if you were a celebrity like Anthony Bourdain.

Today I serve as the Human Rights Ombudsman of that invisible republic, the Republic of Artsakh, also known as Nagorno Karabakh. It has been my job, since I took office two years ago, to defend the human rights of every person on this land against any encroachment: by the government of Artsakh itself or any foreign adversary.

It has been an absurd, almost impossible mission—to defend the rights of human beings who do not exist according to the international community. Despite my invitations, no major international human rights organization has ever visited our republic to check how the rights of children, women, disabled persons, and other vulnerable groups are protected in Artsakh, or to contribute to our efforts to improve human rights protection systems.

In these lonely years, I found myself wondering: do human rights even exist in this blind world?

As of the morning of September 27, 2020, that question can no longer be ignored. On that day, Azerbaijan, with the overt backing of the Erdogan regime in Turkey and the recruitment of Syrian and Libyan mercenary-terrorists, began a coordinated a full-scale invasion of Nagorno Karabakh, violating a ceasefire that was established in the disputed region in 1994.

Even as a ceasefire has been called, the indiscriminate targeting of civilian populations has created a live human rights crisis that is spiraling out of control.

I have lost my sight, but I know an illegal cluster bomb when I hear one. I can touch the ruins of our Holy Savior Church in Shushi, which was bombed twice in one day, while civilians (and visiting journalists) were praying inside. I can smell the kerosene in the basements where women and children of our republic are now huddled, awaiting the end of the war.

Together with my colleagues in the Ombudsman’s Office, we have been documenting human rights violations and hoping that the world will stop being blind toward them.

Diplomats and lawyers can weigh “self-determination of peoples” versus “territorial integrity.” Analysts can debate the geopolitical implications of the Syrian mercenaries, jihadists, and other proxies that are pouring in to fight the Armenians here. Armenian and Azerbaijani forces can draw up battle plans. All of this will continue to happen in the coming days and weeks.

But what about human rights?

While the diplomatic world does not yet recognize this place, I have always believed that human rights are not sourced in any government or geopolitical handshake. They are not determined by Josef Stalin’s decision to annex Artsakh to the Soviet Republic of Azerbaijan in 1921. They are not overruled by the blindness of world powers to our lawful, democratic declaration of independence in 1991, and our achievements in building democratic institutions since. They are not dependent on which republic has the oil revenue to hire lobbyists on their behalf.

Whether they come from above or within, human rights are native to the human condition and experience. And any individual or organization that claims to defend human rights must defend them without limitation, especially when the lives of a vulnerable and disadvantaged population are at stake.

You may call it the Republic of Artsakh or the disputed region of Nagorno Karabakh or something else. But there are people living here, as there have been for thousands of years—an ancient, Christian people who are being indiscriminately bombed, destroyed, and annihilated.

I will never see again. Many children here will never see their fathers again. But I hope at least that you can begin to see what is happening here. Long before politicians or analysts or armies can find their solutions, we as defenders of human rights must deliver on our commitment: to defend the human rights of all human beings, however invisible they may seem.

Artak Beglaryan is the Human Rights Defender of the Republic of Artsakh / Nagorno Karabakh and has been documenting and sounding the alarm on the ongoing human rights crisis. Follow his #DontBeBlind campaign here.