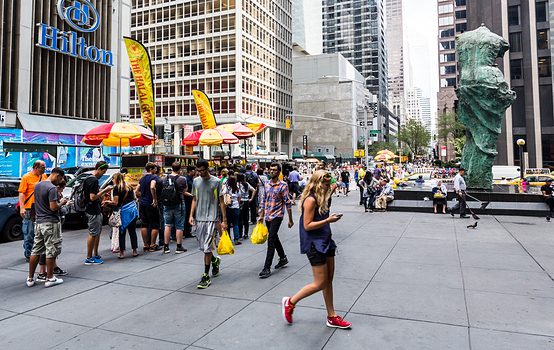 Even on a warm late summer evening, many streets of Midtown Manhattan’s east side feel oddly desolate. A few blocks south of Central Park, along what has been called “corporate row,” the modernist office towers lining Sixth Avenue enter a slumber, most of their workers having gone home. Yet as the wide artery reaches the corner of 53rd Street, there is life on the wide sidewalks, as dozens line up at food carts. One portable kitchen in particular, The Halal Guys, has become a destination rather than a mere convenience for those who happen to be passing through.

The vendors take orders briskly, trying to keep the sidewalk line moving. But then patrons realize that despite the expansive open space surrounding the 45-story tower at the southwest corner of this intersection, there is no good place to sit and eat their lamb gyros and chicken platters—at least nowhere ideal. A few overcrowded benches seem far down the block, and the plaza fronting the former J.C. Penney headquarters is dominated by two large statues surrounded by square reflecting pools. Situated below the low walls of these water features there is a drain about a foot wide that from a distance is easily mistaken for a bench.

And so, seeing no other option, many diners sit on the drain, crouching forward in a rather perilous position: should they forget they are not in fact on a park bench, and inadvertently lean backwards, they will leave with appetites sated, but clothing soaked.

No one dares complain about this unfortunate design flaw. After all, it would seem that the plaza and fountain are not a public park, but on property owned by the building. Street diners are made to feel like squatters. But in fact, they have every right to enjoy the place—the ad-hoc dining room for the food carts is in the odd category of “privately owned public space.” In New York City, these hybrid spaces began appearing when a 1961 zoning resolution allowed developers to build larger and taller towers on the site than normal rules would otherwise have permitted—in exchange for creating more public space.

The 1960s coincided with the heyday of modernist architecture. As the boxy glass towers of the Mad Men era rose along the corridor Mayor Fiorello LaGuardia had earlier ambitiously renamed the Avenue of the Americas, they invariably incorporated large public plazas that followed the modernist handbook, featuring clean lines and a utilitarian aesthetic. That didn’t mean these places were actually pleasant for the people they were intended to serve.

As William H. Whyte found in his landmark 1979 study The Social Life of Small Urban Spaces, too often the modernist architect saw the space surrounding their buildings as a mere “plinth” on which to display their tower. As such, they treated outdoor furniture like benches as “artifacts,” “the purpose of which is to punctuate architectural photographs,” not offer comfort to the public; the dimensions and design are often awkward and uncomfortable.

In a documentary film and book produced for the Municipal Art Society of New York, Whyte uses time-lapse films of plazas and close-up observation (including of the former J.C. Penney building) to provide basic but important observations such as “people tend to sit where there are places to sit.” His conclusions “might not strike you as an intellectual bombshell,” he admits, but by just watching these places for a few days, one can infer that a few simple elements often make an urban public space successful: street-level visibility, sittable space, exposure to sun, food, water features, and clusters of trees are the primary ingredients in Whyte’s recipe.

The former J.C. Penney plaza, where The Halal Guys cart has enlivened a place that otherwise might be underutilized, would seem to fail primarily in the area of sittable space—though trees would bring some life to what is generally a cold, hard, and forbidding landscape. By providing such popular street food, the vendors have already helped the plaza’s current owners create a space that at least meets one of Whyte’s criteria—access to food. But The Social Life of Small Urban Spaces has now been available for over a generation, so why haven’t such prominent plazas learned a lesson about comfortable seating by now?

Still, there are reasons for advocates for quality public space to be optimistic. The original J.C. Penney plaza, as constructed in 1964, was even worse, “sunk 21 steps below the sidewalk … a narrow, rectangular pit with fixed benches, planters, and a metal fish sculpture.” It was “dark, dreary, and, understandably, rarely used … occasionally closed off by metal chain, as if to keep out the hordes seeking entry.” In 1991, the pit was filled in and the current water features installed, at least making the area more accessible at street level.

For additional inspiration, those trying to retrofit the modernist plazas of Sixth Avenue need only take a walk down to 42nd Street. Bryant Park was once a haven for drug deals and muggings because of reduced visibility and access, as well as a lack of amenities. But after a multiyear renovation explicitly guided by Whyte’s study, the former no-go zone reopened in the 1990s and is now one of the most popular public gathering places in the city. Besides a critical lowering of the park’s terrain to make activities inside less opaque, the renovation also introduced an element that remains key to its popularity: movable chairs and tables. Back in 1979, Whyte explained that allowing plaza users to drag furniture about as it suited their needs was key to them feeling a sense of independence and collective ownership. The proliferation of this practice today has solidified his status as a prophet of good urban design.

In an era when elite planners and architects assumed they knew better than average city dwellers what makes a good public space, Whyte’s study also suggested that when provided with the basic elements needed for success, ordinary people do a good job of bringing both lively interaction and orderliness to urban life. As befits an era that was obsessed with overpopulation, many 1960s designers of urban plazas were concerned about “carrying capacity,” fearing that providing too many amenities would render public spaces chaotic and overcrowded. But as Whyte’s time-lapse photography shows, even the most popular sidewalk spots benefit from a kind of spontaneous order that keeps pedestrian traffic moving with a reasonable number of users.

If this kind of freedom is a key part of urban vibrancy, planners should also ensure that food trucks such as The Halal Guys feel at home. In some cities, these sidewalk carts have been under attack from regulators and brick-and-mortar restaurant lobbies, but such fast food entrepreneurs undoubtedly make better public spaces, and ought to be encouraged, not hindered.

As for the plaza that plays host to The Halal Guys at 1301 Avenue of the Americas, owner the Paramount Group would do well to watch William Whyte’s film. With just a bit of retrofitting, their sidewalk space could be transformed. It’s now a popular place in spite of itself, where people are forced to adapt to marginal conditions. But it can become a space that brings life to the street, providing more customers for the building’s retail tenants and an amenity to all those who work there.

As the great urbanist of the 20th century Jane Jacobs wrote, “cities have the capability of providing something for everybody, only because, and only when, they are created by everybody.”