YouGov asked Americans whether they want the next president to be more or less willing than Obama to use the military in foreign conflicts, and these were the results: 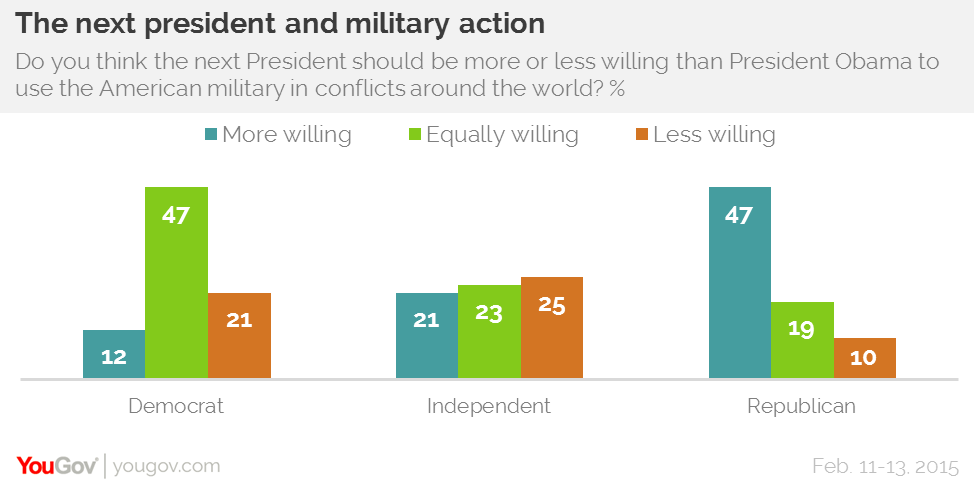 There is some good news in these findings for advocates of restraint. Most Americans don’t want a more hawkish foreign policy than Obama’s  (only 25% overall favor this option), and even among Republicans the support for more military interventions around the world is just 47%. There is a constituency in the GOP for a foreign policy that is at least no more hawkish than Obama’s, and there are quite a few Republicans (24%) that are unsure. Those are people that might be persuaded of the merits of a restrained foreign policy if they are exposed to enough arguments for it. That uncertainty at least suggests that they are not yet committed to favoring a more militarized foreign policy than Obama’s, and it suggests that they might be willing to accept a candidate that favors greater restraint. There is also some evidence that there could be more support for restraint in the future: the hawkish respondents are more heavily concentrated among older Americans, and many of the younger respondents don’t claim to have firm views about this one way or the other.

The bad news is that all of this is being measured against Obama’s willingness to use the military in foreign conflicts. As we have seen in the Libyan war, the near-intervention in Syria, and the new war on ISIS, he is perfectly willing to to do this on many different occasions. If 29% are satisfied with that much military action overseas, and 25% want even more, that is most unfortunate.  Obama has used the military frequently in many countries for the entirety of his presidency, and so judged against that standard it is disappointing that there is not a much larger response in favor of having fewer interventions around the world.