Even if Bernie rebounds, you can't deny the former vice president is back to being a serious contender. 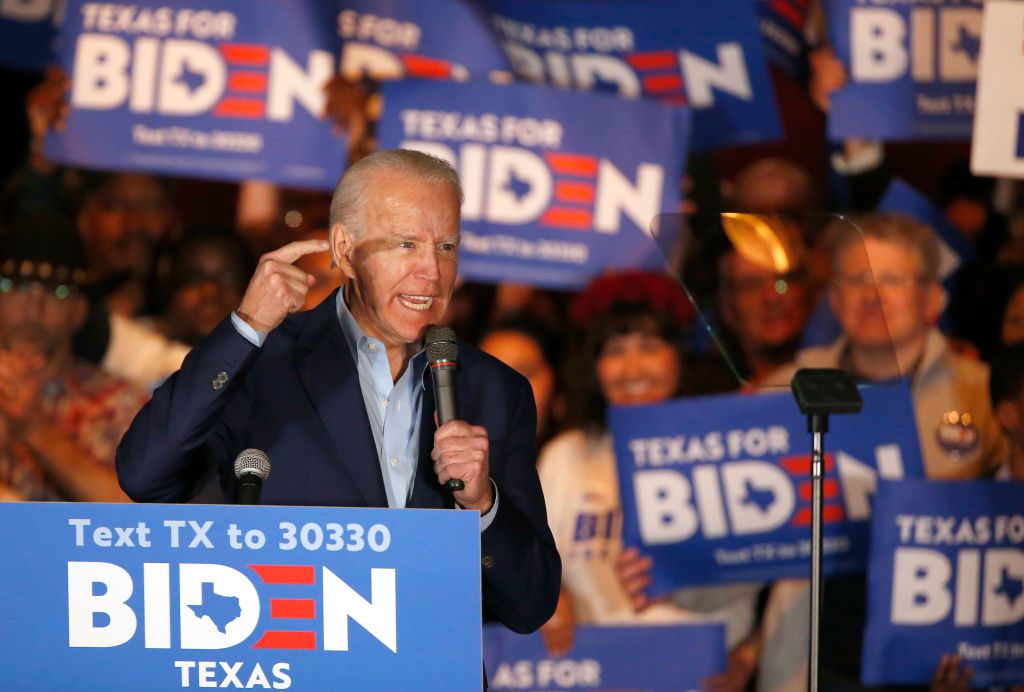 California complicates the picture, but former Vice Joe Biden has staged perhaps the fastest and most impressive comeback in recent American politics. Even if Senator Bernie Sanders comes away with the biggest prizes, Biden has gone from dead man walking to at least a co-frontrunner for the Democratic nomination in just a few days.

Not only did Biden rack up solid margins in the South (and establishment-friendly Southernish states like Virginia) but he won Amy Klobuchar’s Minnesota. He is fighting Sanders to a draw in Maine, still leading narrowly as of Wednesday morning. Biden beat both Sanders and Bay State Senator Elizabeth Warren in Massachusetts, by a nontrivial margin. He won states where he hasn’t really spent any money while former New York City Michael Bloomberg has little more to show for his massive advertising expenditures than a win over Tulsi Gabbard in American Samoa, where the billionaire received all of 175 votes.

Sanders bounced back with a win in California. But he lost Texas, despite a strong showing with Latino voters. Biden wasn’t even supposed to be in the running in the Lone Star State, where he had held a rally with vanquished rivals in Dallas on Monday night. It was a huge missed opportunity for Sanders, who could have halted the former vice president’s momentum by walking away with Super Tuesday’s two biggest prizes.

With a nearly 30-point victory in South Carolina on Saturday, Biden revitalized his seemingly moribund campaign. Klobuchar and Pete Buttigieg exited the race and endorsed him. Bloomberg reportedly may consider joining them. Biden nevertheless defeated Sanders even in some contests where Bloomberg was in the double digits, theoretically splitting the establishment/centrist vote. Whatever momentum Sanders was gaining with black voters is gone. Yes, some younger African Americans are voting for the Vermont socialist, but overall Biden made Bernie look like Barry Goldwater in terms of black support. (Sanders has done better with Latinos.)

The speed with which Democrats stampeded to Biden at the first sign of viability, abandoning a brief flirtation with Bloomberg, suggests misgivings about Bernie and the socialist revolution even within the Democratic primary electorate. How much that had to do with ideology versus electability concerns, and whether Democrats are reading the electoral tea leaves correctly, remains open for debate. But once Warren wounded Bloomberg in the debates—Mayor Mike’s participation in the debates before even competing in a state was clearly a strategic error—and nervous anti-Bernie Democrats were looking for somewhere else to go, we were a James Clyburn endorsement away from a Biden comeback.

It remains to be seen whether Biden can go the distance against Sanders, given lingering questions about his stamina and the volatility of the electorate. Biden will need to beat Sanders cleanly enough to avoid the sense that the nomination was stolen by party bosses. Sanders supporters already sense that the establishment fix is in. Even if Biden wins the nomination and unites the party in Milwaukee, there is still no guarantee he will unseat President Donald Trump, who is already gearing up for a campaign against “Sleepy Joe.”

But just two weeks ago, Biden didn’t look like he was in a position to do much of what he has accomplished on Super Tuesday. he might have even been a weak showing in South Carolina away from dropping out. Past candidates who have ridden South Carolina to the nomination—George H.W. Bush, Bill Clinton, Bob Dole, George W. Bush, Barack Obama, John McCain, arguably even Trump—had all won other states beforehand. The best Biden had done was a distant second place showing in Nevada.

At a minimum, Biden lives to fight another day—and he may even regain the frontrunner status he enjoyed for months before the voting started. Once thought of as another Jeb Bush, he is now closer to Bill Clinton, The Comeback Kid.