Ayatollah Khamenei, who was visiting with Japan's prime minister at the time, calls Washington's charges 'suspicious.' 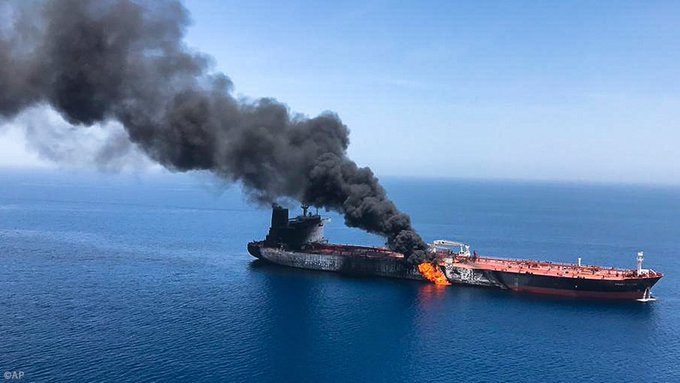 "It is the assessment of the U.S. government that Iran is responsible for today's attacks in the Gulf of Oman" Credit: @SecPompeo
Barbara Boland

WASHINGTON—Secretary of State Mike Pompeo announced Thursday that the U.S. has determined that Iran is responsible for Friday attacks on two oil tankers in the Gulf of Oman and the Strait of Hormuz, along vital oil shipping routes.

“It is the assessment by the United States government that the Islamic Republic of Iran is responsible for the attacks that occurred in the Gulf of Oman today,” Pompeo said during a press briefing at the State Department Thursday.

“This assessment is based on intelligence, the weapons used, the level of expertise needed to execute the operation, recent similar Iranian attacks on shipping, and the fact that no proxy group operating in the area has the resources and proficiency to act with such a high degree of sophistication,” the Secretary said, without taking questions. He did not cite specific evidence as to why the U.S. believes Iran, or its proxies, are responsible for the attacks. National Security Adviser John Bolton said last month that Iran was behind a similar attack on four commercial tankers in the same area on May 12.

“Iran is lashing out because the regime wants our successful maximum pressure campaign lifted,” Pompeo said during the briefing. “No economic sanctions entitle the Islamic Republic to attack innocent civilians, disrupt global oil markets and engage in nuclear blackmail.”

The “maximum pressure campaign” Pompeo referenced are the sanctions the U.S. has reimposed, which starve Iran’s economy of valuable revenues from the country’s oil and metal exports.

The briefing came just hours after two ships in the region sustained damage and were abandoned by their crews. One of the two ships was on fire, according to reports.

“We are aware of the reported attack on shipping vessels in the Gulf of Oman,” said Cmdr. Josh Frey, a spokesman for the U.S. Navy’s Fifth Fleet. “U.S. Naval Forces in the region received two separate distress calls at 6:12 a.m. local (Bahrain) time and a second one at 7:00 a.m. U.S. Navy ships are in the area and are rendering assistance.”

… The MT Kokuka Courageous was first to issue a distress call, and its crew of 21 mariners abandoned ship. At the time of the attack, the ship had been transiting through the Gulf of Oman in international waters, close to Iran. A nearby Dutch tug picked up the mariners and then transferred them to the U.S. Navy destroyer USS Bainbridge that had been in the vicinity and also responded to the distress call, according to an official. The crew of the Bainbridge spotted an unexploded mine attached to the side of the Kokuka Courageous, another official said. …

About 45 minutes later distress calls were received from the MT Front Altair, a commercial ship that was a significant distance away from the Kokuka Courageous said the official. The 23 mariners aboard that ship also abandoned ship. The Seoul-based Hyundai Merchant Marine Co. confirmed in a statement that its ship the Hyundai Dubai had rescued the 23 mariners from the MT Front Altair and then turned them over to an Iranian rescue boat. Both ships were headed for Japan when they were attacked.

Pompeo implied that the attacks were a pointed message from Iran against Abe’s overtures for peace.

“Iran’s Supreme Leader rejected Prime Minister Shinzo Abe’s diplomacy today by saying he has no response to President Trump and will not answer,” Pompeo said. The Iranian government “insulted Japan by attacking a Japanese oil tanker just outside Iranian waters.”

Tensions with Iran have been escalating for the past month, exemplified in Bolton’s warning on May 5 that the U.S. would respond with “unrelenting force” to any attack by Iran or its proxies, and his announcement that the Pentagon has a plan to send 120,000 troops to the region. The Trump administration has already sent a military strike group and 1,500 troops in response to Iranian threats to shipping.