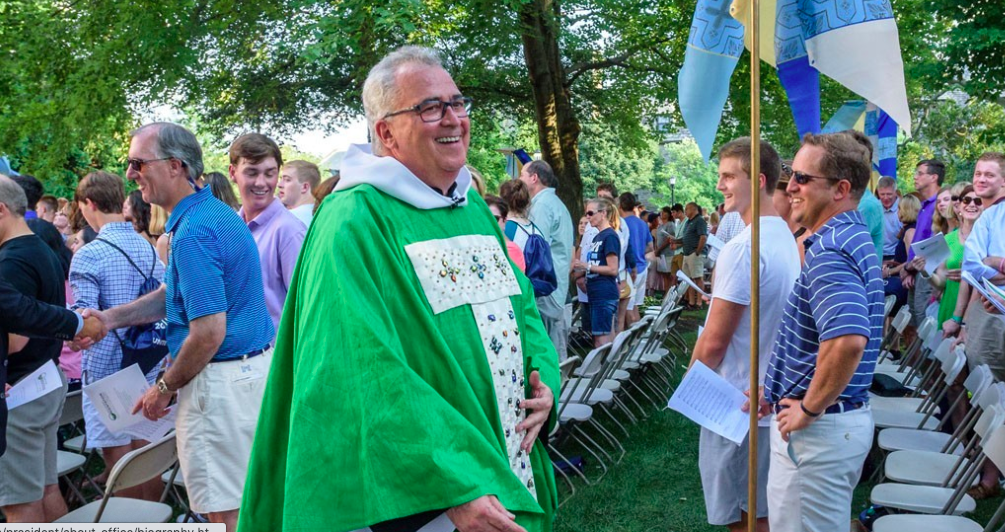 This went out to Villanova University today from its president and its chief diversity officer. It was sent to me by a disgusted Villanovan who can hardly believe what is happening to the university:

Dear Members of the Villanova Community,

Since the summer of 2020, the Aequitas Task Force has been diligently working to create a Villanova community marked by a sense of openness, fairness and justice for all. In the process, we have come to see our work through the lens of antiracism and have adopted the aspirational goal of becoming an antiracist campus. The work of antiracism is not solely about race. The Task Force adopted an orientation that focuses on policies, practices and structures that create or sustain inequity of any minoritized people. Race becomes an entry point of focus; we know people are not just a single identity. The aspiration of becoming an antiracist campus means that we commit ourselves to work for justice and equity for everyone.

Recent headlines are replete with examples of hatred and violence aimed at the Asian and Pacific Islander communities. These acts of malice and cruelty are reported regularly but none so heinous as the murder of eight people in Georgia. We write today not just to mourn the deaths of the eight victims – six of whom have been identified as Asian American women – or to decry the acts of hostility often aimed at the most vulnerable in the Asian communities, but to say at Villanova we hold tenderly all members of the American Asian Pacific Islander (AAPI) community in our hearts and offer ourselves in kinship and support. It is in times like these, we need to hear the cries of all communities in pain and respond with meaningful care and empathy.

There is another community today feeling hurt and invalidated. A recent Vatican statement has left members of the LGBTQAI+ community and their allies at Villanova wondering whether their place on campus is safe and secure. Without equivocation, Villanova affirms that all people are welcomed on our campus, especially those who suffer from exclusion. We believe deeply in the humanity and intrinsic worth of the LGBTQAI+ community.

As we navigate these difficult times, the Office of the President and the Office of Diversity, Equity and Inclusion (ODEI) share a responsibility to monitor the stability and health of our campus community. We are here for all Villanovans and are obligated to raise issues impacting the life and happiness of community members who feel unseen or unheard or unsafe. Understanding those around us will help us do everything we do here at Villanova better.

If you have concerns about your experiences on campus, please reach out to the resources available through ODEI, the Office of Intercultural Affairs, the Center for Access, Success and Achievement, or any of the diversity offices located in the schools and colleges. We are here to listen. You are not alone.

Remember, the difficulties of today unless challenged will become the reality of tomorrow. We will become an antiracist campus when we make issues of injustice our own.

Where does one even begin? To be an “antiracist” campus is to embrace the crackpot neoracist ideology of Ibram X. Kendi. This Catholic university is committing intellectual and moral suicide.

Second, I’m old enough to remember when crimes happened elsewhere in America without university presidents feeling the obligation to issue a statement of sympathy and solidarity with the victims. This is pathetic virtue signaling, straight up. Tenderly … hearts … pain … care … empathy. What is going on here? Is this a university, or a therapist’s practice? It’s crazy.

It’s not that I believe people shouldn’t show empathy, but come on, what is the president of a Catholic university in suburban Philadelphia doing taking this opportunity to empathize in such an unctuous, simpering manner? It’s moral vanity. It’s woke kitsch, taking the horrible murders of these massage parlor employees and turning it into an opportunity for a college president to beat his breast in public. The novelist Milan Kundera said:

Finally, there is not a single LGBT+alphabet-soup-osexual on that campus who believes that his or her place on Villanova’s campus is unsafe and insecure because the Vatican refuses to authorizing blessing same-sex couples. If anything, I’d bet that faithful Catholic students who believe that the Vatican has made the theologically and morally correct call here have more to fear on campus by publicly expressing agreement with the Pope. Again, this is Donohue engaging in kitsch. It’s a chance for the college president to signal that he is on the side of progressive sexual values, not Catholicism. Is Father Peter Donohue claiming indirectly that the Pope doesn’t believe in the “humanity and intrinsic worth” of these people because he will not bless same-sex couples?

Here’s how much it costs to attend Villanova:

Why would you go that deeply into the financial hole to attend a Moralistic Therapeutic Deist school whose president can’t bring himself to support his own Church’s teaching, and which is choosing to corrupt itself by embracing a fashionable neoracist ideology that will poison the minds of undergraduates and make dissent impossible (by characterizing it as racist)?

UPDATE: I’m trying to put my finger on why this irritates me so much. I think it’s the linking of the “antiracism” project of the university (which will destroy standards of justice and clear thinking for the sake of wokeness) to statements of sympathy for Asian students on campus (do they really feel at risk from sex-deranged Georgia Baptist gunmen?), to backhandedly denouncing the Vatican for defending Catholic teaching: it’s all a bunch of sentimental goop that represents the ne plus ultra of virtue-signaling among academics today … and a betrayal of what academic leadership is supposed to be. It’s a kind of corruption.