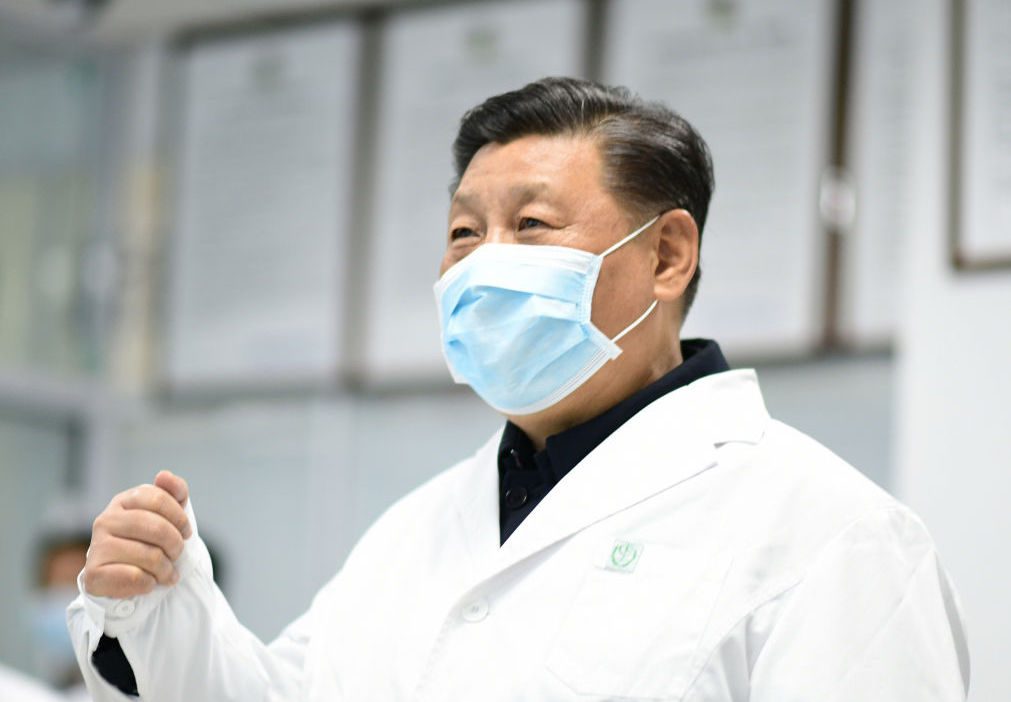 Who is that masked man? Xi Jinping, the godfather of the COVID-19 catastrophe (Photo by Xie Huanchi/Xinhua via Getty)

I get why people are bothered by the president calling it the “Chinese virus.” It is impossible in our language to discern between Chinese ethnicity and Chinese nationality. A Chinese-American reader e-mailed me last week:

The issue in the Asian American community with the term Wuhan virus or Chinese virus is that this term is a linguistic set up for blaming the virus on China which will inevitably spread in the US to blaming “Chinese people” (aka people who look Chinese in the US). Once Trump realizes he can’t spin his way out of this disaster, he will pivot to blaming others — immigrants, Chinese Americans, etc. everyone recognizes the power or mental framing and labels.

As a Chinese American (moved here when I was 5, lived here for 25 years, US citizen), I am worried the combination of geopolitical confrontation with China will easily combine with fear against coronavirus and then lead to racism and discrimination against the millions of Chinese Americans.

There is already schoolyard bullying against East Asian kids because of the virus and the attempt by politicians to label this the China Coronavirus will further entrench this racism in the public. I’ve already had numerous Uber drivers cancel when they see me as they drive by to pick me up. Deliberate labels by politicians are a set up to start blaming China if/when things get worse in the country. Yes there are theories about the virus origins (eg it wasn’t a seafood market, etc) but until those theories have evidence they remain in backed theories.

So yes wokeness can be too extreme but there’s a real racial tension that these labels exploit and exacerbate.

This is a real thing, and because of it, I don’t think the president should use the term “Chinese virus,” but honestly, I think there are about ten thousand things more important to worry about. Maybe I would feel differently if I were Chinese-American.

However, what many Americans don’t understand is that the People’s Republic of China has been running a coordinated propaganda campaign, through its ministers and its ambassadors, to blame the United States for the virus. The New York Times has a great short documentary detailing how they’ve done it. Whatever you think about Trump, I strongly encourage you to take three minutes and watch this excellent work:

Chinese propaganda in full blast seeking to blame the virus on US: https://t.co/5T017zqmy0

Axios has a timeline of the coronavirus outbreak, and the Chinese government’s attempts to deny the seriousness of it, and its delays in responding. Excerpt: Think of that timeline in this context: A study by the University of Southampton reckoned that if China had intervened to fight the virus three weeks earlier than it did, 95 percent of its spread would have been arrested. In other words, had Beijing taken the first warnings out of Wuhan seriously, and not tried to suppress that information, the world would almost certainly be fine right now. All the death, all the sickness, all the economic destruction that we’re enduring would not have existed — if not for Beijing’s actions.

This is why Beijing is going all-out to deflect blame from itself, and put it onto the US. The Chinese Communist Party first victimized the people of China, and now it has victimized the world. Are there better ways to fight this propaganda war than Trump crudely saying “Chinese virus”? Yes, of course. But it must be fought. The Chinese people didn’t do this to us; the Chinese Communist Party did. The Chinese people were their first victims. Now the world is suffering from the CCP’s incompetence and malice.

That does not excuse the failures of President Trump, or any other Western leader. But let us never, ever forget who brought this curse upon the world: the Chinese Communist Party.

When this is over, and we all devote ourselves to rebuilding out of the economic rubble, the new world order must exclude a China run by the Communist Party. Andrew Michta tells is like it is:

The idea that the People’s Republic of China can become a responsible stakeholder in the international community—that it can “be like us”—is being laid to rest behind the masked faces of petrified Westerners scurrying through airports to get home.

Amidst the 24/7 breathless media coverage and calls for politicians to “do something,” one fundamental question still needs to be addressed forthrightly and in the open: Who did this to us and what to do to prevent it from happening again?

The question about assigning agency and blame is pretty straightforward to answer: The communist Chinese state, which for more than three decades has been draining capital and knowledge from the West, benefiting from our greed and myopia, has just let loose a virus that in the coming months is about to effectively paralyze Europe and the United States and bring severe pain, both human and economic on the world. The “eruption at a wet market” explanation for the virus has to be questioned until we know the full story, if for no other reason than the fact that Beijing suppressed data for two months when the coronavirus first appeared, and even to this day refuses to come clean as to exactly what happened. Indeed, the Chinese Communist Party (CCP) is now spinning propaganda stories that both seek to somehow pin the blame on the United States, and that try to frame their bungling, denial-ridden, heavy-handed reaction as some kind of model for the world.

As a result of all this, the West is now shutting down, at least for a while. The ultimate cost to the world, in terms of new government debt, failed businesses, and human lives and suffering, is difficult to quantify at this point. But there are indications that the fallout from the Wuhan Virus could be transformative.

Should the fallout from the Wuhan Virus prove to be as damaging as it looks like it might be, the first casualty should be China’s quest to become the premier manufacturing center for the world. Few corporations will want to again risk being caught in a situation where their entire supply chain has been locked into one country—much less a palpably hostile dictatorship. The subsequent era will, I hope, be one of strategic reconsolidation, with a special focus on onshoring critical supply chains that have been moved to China. Even the siren song of potentially-vast consumer markets in China may end up being more than offset by the trauma we are about to face.

Read it all. This is not “scapegoating.” To scapegoat is to blame an innocent party. There is nothing innocent about the Chinese government, and what it has done. The catastrophe now befalling our economy will at least make the hard decoupling easier. Never again should we be at the mercy of these villains.

Here’s Shadi Hamid, a liberal scholar who has no sympathy for Beijing. He recounts the ways the Chinese government downplayed the crisis at first, suppressed reporting on it, and thereby allowed it to escape Wuhan. Xi Jinping’s regime did this, and the world should keep this front to mind. Excerpt:

[I]s this a time for blame? Yes, it is. Accounting for responsibility when a disaster happens—particularly one likely to devastate entire countries, leaving thousands dead—is not beside the point, particularly as Chinese officials move to take advantage of the crisis and launch a disinformation campaign claiming that the U.S. Army introduced the virus.

Well before the new coronavirus spread across American cities, the Chinese regime was already rather creatively trolling U.S. publications, expelling American journalists, and “weaponizing wokeness” over anything it perceived as critical of China’s role in mishandling the epidemic. To hear Chinese spokespeople use the language of racism and prejudice is somewhat surreal, considering this is a regime that has put more than 1 million Muslims and ethnic minorities in “reeducation” camps.

Of course, Americans will have to be vigilant against scapegoating Asians in general or the Chinese people in particular. With one of the highest infection rates and death tolls, Chinese citizens have suffered enough. The Chinese leadership, however, is another matter. A government is not a race. It’s a regime—and easily one of the worst and most brutal in our lifetime. Criticizing authoritarian regimes for what they do outside their own borders and to their own people is simply calling things as they are. To do otherwise is to forgo analysis and accuracy in the name of assuaging a regime that deserves no such consideration.

Read it all. Once again, Shadi Hamid is a liberal, and no fan of Donald Trump. But he’s keeping his eye on the true villain in this civilization-shaking crisis. So should we all. All around me, in my city, friends are losing their jobs, and seeing their businesses destroyed. None of this had to happen, if the Chinese Communist Party had acted responsibly.