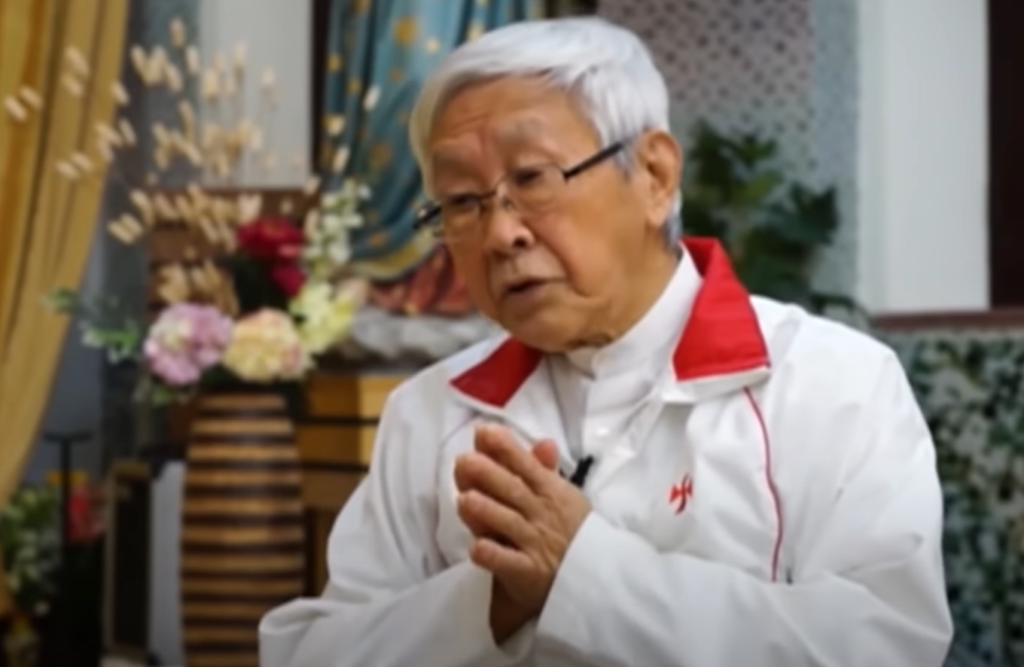 Did you know that the communist Chinese have put the elderly Catholic Cardinal Joseph Zen, age 90, on trial for supporting democracy in Hong Kong? Ninety years old, and they're doing this to him for opposing totalitarian rule.

Well, surely the besieged old cardinal can count on the Pope to rally the world to his side. Right? Let's see what Francis had to say about the Zen trial when asked:

Elise Allen, CRUX
"Thank you for being with us this evening. Yesterday at the Congress, you spoke about the importance of religious freedom. As you know on the same day the president of China arrived in the city, where there has been great concern about this issue for so long, especially now with the trial that is going forward against Cardinal Zen. Do you consider the trial against him a violation of religious freedom?"

To understand China takes a century, and we do not live for a century. The Chinese mentality is a rich mentality, and when it gets a little sick, it loses its richness; it is capable of making mistakes. In order to understand we have chosen the path of dialogue, open to dialogue.

There is a bilateral Vatican-Chinese commission that is going well, slowly, because the Chinese pace is slow, they have an eternity to go forward: they are a people of endless patience. From the experiences we had before: we think of the Italian missionaries who went there and were respected as scholars; think also today, so many priests or believers who are called on by Chinese universities because this gives value to the culture. It is not easy to understand the Chinese mentality, but it should be respected, I always respect this. And here in the Vatican, there is a dialogue commission that is going well, chaired by Cardinal Parolin and he is the person right now who knows the most about China and dialogue with the Chinese. It is a slow process, but steps forward are always being made.

Qualifying China as undemocratic, I do not identify with that, because it's such a complex country ... yes, it is true that there are things that seem undemocratic to us, that is true. Cardinal Zen is going to trial these days, I think. And he says what he feels, and you can see that there are limitations there. More than qualifying, because it is difficult, and I do wish to qualify, they are impressions, and I try to support the path of dialogue.

Then, in the dialogue you clarify many things and not only about the Church, also about other areas; for example the extent of China, the governors of the provinces who are all diverse. There are different cultures within China, it is a giant, and understanding China is an enormous thing. But you do not have to lose patience, it takes a lot, but we have to go with dialogue, I try to refrain from qualifying it... but let us go forward.

China is not undemocratic, says Pope Francis. Also, diversity. Diversity and dialogue! That's the ticket! Equity and inclusion, anybody? Anybody?

Poor Cardinal Zen. He stands in the dock alone, betrayed by the Pope who sold out the underground Chinese Catholic Church. Back in 2016, the Hong Kong cardinal spoke out against the deal the Vatican was making with Beijing:

Early on in the Francis pontificate, the Vatican showed signs of openness to work toward a diplomatic rapprochement with the Chinese government, something Cardinal Zen has resolutely opposed. Last year, Zen told the Italian daily Corriere della Sera Vatican that the Vatican was being naïve in its dialogue with Beijing.

“Italians in the Roman Curia don’t know the Chinese dictatorship,” he said, “because they have never experienced a Communist regime.”

Those in Rome who are anxious to succeed at all costs are moving toward a compromise that is really an “unconditional surrender,” Zen lamented.

A better approach, the Cardinal suggested, would be “to encourage our persecuted in China to be brave.”

One year ago, Cardinal Zen outright said that the Vatican sold out China's Catholics to appease Beijing:

Rod Dreher August 2, 2022
Beijing's bullying of Taiwan is reprehensible, but Pelosi's visit to Taipei at this moment is incredibly dangerous

Rod Dreher January 17, 2022
Billionaire venture capitalist says neither he nor anyone else really cares about Uyghurs persecuted by Beijing. To our shame, he's right
Advertisement
Advertisement