Crozier Should Be Reinstated

If you wanted a better example of outstanding leadership, you would be hard-pressed to find it. 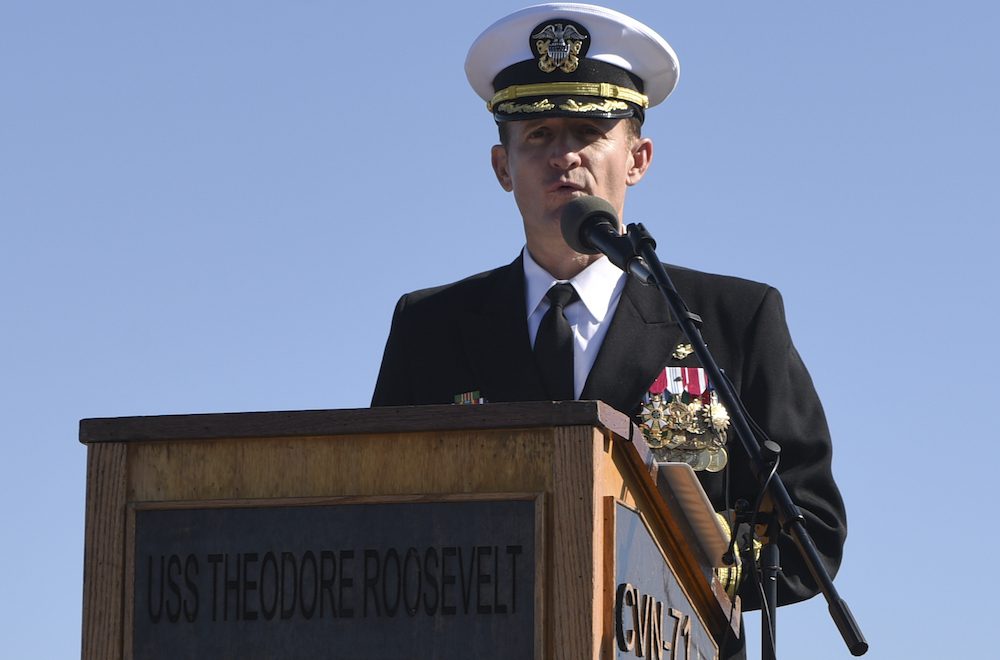 The New York Times reports on the outbreak on board the USS Theodore Roosevelt, and their account includes a few important new details. According to the report, the ship’s reactor department was hit first. The ship’s doctors warned the captain that the outbreak could mean more than 50 dead sailors on the ship. When the captain finished composing his letter, the senior officers serving under him wanted to co-sign it, but he insisted on taking sole responsibility for it:

He showed the email to a handful of the most senior officers on the ship. They told him they wanted to sign it, too. Captain Crozier, fearing for their careers, told them no.

The fact that the captain’s senior officers agreed so strongly with his assessment of the situation and his recommendation to evacuate the ship tell us that the captain was not “panicking” under pressure, as the former acting Secretary of the Navy claimed, but was taking what he believed to be the necessary action to protect the crew under his command. He understood the possible implications for himself in sending the letter, but he did it anyway because it was the correct thing to do under the circumstances. He could have allowed his subordinates to sign on and risk their careers alongside his, but instead he shouldered the responsibility alone. If you wanted a better example of outstanding leadership, you would be hard-pressed to find it. The more that we learn about the events of the last two weeks in connection with the outbreak on the carrier, the more it becomes clear that the captain did a hard but necessary thing and removing him from command was a serious error that should be rectified.

Guy Snodgrass recently made the case for reinstating Crozier to command of the carrier in acknowledgment that removing him was a mistake:

Restoring Captain Crozier would demonstrate unequivocally that even senior leaders can make mistakes, learn from them, and correct them when the situation warrants. His restoration to command would also reinforce the U.S. Navy’s desire for commanding officers to make difficult decisions under incredible pressure regardless of the consequences.

The news article’s reference to the doctors’ warning reminded me of something I had seen in the San Francisco Chronicle report from last week about the lack of protective equipment for the carrier’s cleanup crews. The Chronicle reported this:

Speier said she spoke last week with Modly, the former acting Navy secretary, who told her Crozier had been “spooked by the doctors.” [bold mine-DL]

“Well, that’s precisely what he had a responsibility to do, is get spooked by the doctors, and that comment gave me the impression that the secretary was not taking this seriously enough,” Speier said.

In this case, getting “spooked by the doctors” meant taking their warnings about dozens of preventable deaths seriously. If Modly thought that this was a failing on Crozier’s part, that is more evidence that Modly didn’t understand the first thing about Crozier’s position and that he underestimated the danger from the virus. During a pandemic, we should hope that political and military leaders get “spooked by the doctors,” because the doctors are the ones who best understand the nature of the threat. The governments whose leaders were sufficiently “spooked by the doctors” have responded effectively and quickly, and those that ignored the doctors’ warnings or tried to minimize the problem have presided over debacles. Which kind of leader do we want in charge of one of our aircraft carriers? Obviously, it’s the former.

The Times report notes that the ship’s medical department has since come under scrutiny after Crozier’s removal:

The dismissal and subsequent investigation hit the ship’s medical department hard right away. The same day Captain Crozier walked off the ship for the last time, Adm. Robert P. Burke, the Navy’s second-highest admiral, called the senior medical officer aboard the carrier as part of his investigation. Admiral Burke criticized the doctor, saying he had failed as a leader. In interviews, two crew members said Admiral Burke’s tone was hostile.

The only way that the medical officers on the carrier would have failed as leaders is if they had failed to give the captain their honest assessment and advice on a matter affecting the crew’s health. If they are being chewed out and attacked by their superiors for doing their jobs, there is something seriously wrong going on.

A new report from the Chronicle details the difficult conditions on the carrier:

But some crew members and their parents paint a bleaker picture of the situation on the Roosevelt, which has been docked in Guam for more than two weeks. In that time, infection rates among its crew have soared, the ship’s commanding officer was ousted after The Chronicle reported on his letter pleading for help, and Acting Navy Secretary Thomas Modly resigned after blasting the captain in an address to the ship’s crew, saying the captain had betrayed them.

On Thursday, the Navy announced the first hospitalization of a Roosevelt sailor. The unidentified crew member, who had tested positive, was found unresponsive. By Saturday, the Navy reported that 550 sailors from the ship have tested positive and 92% of the crew had been tested. Almost 3,700 sailors had been moved off the ship, nearing the limit the Navy has said it would remove.

The dramatic increase in the number of cases in just the last two weeks vindicates the captain’s concerns as legitimate and timely. The evacuation still falls short of what Crozier was calling for, and the remaining crew still doesn’t have the protective equipment they need to clean and run the ship safely. More than five hundred sailors and the captain have tested positive (the latest figure is 585 sailors), and it is not hard to imagine how that number might have been far higher if the captain had not raised the alarm when he did.