When Our Mideast Friends Prove Unfaithful

It's time for the United States to look out for itself. 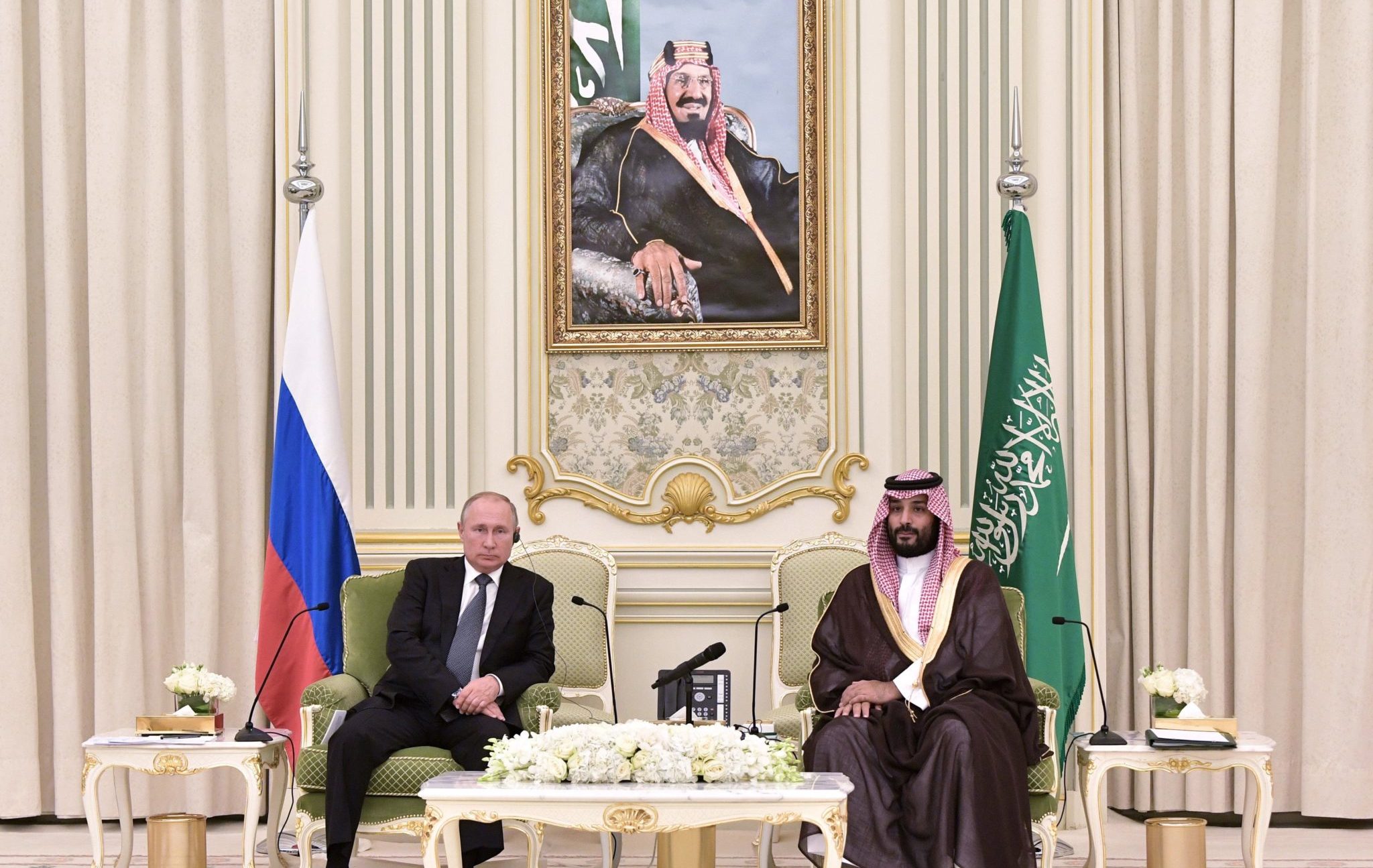 It took a tragic war in Europe to demonstrate that America’s Mideast friends are not really friends. Ever ready to squeeze the U.S. for all the benefits it can provide, they won’t sacrifice for it in return. Even a little.

Uncle Sam is like the lovelorn teen nerd who falls for a popular cheerleader. She happily accepts his gifts, treating them as her due. But for him, nada. Yet he won’t give up, convinced that she really likes him. And on it goes, until reality finally cools his ardor.

Unfortunately, the U.S. is going through something like this with Saudi Arabia and its neighbors. America has never been their first love, which was themselves, but they enjoyed her willingness to do whatever they asked. Provide aid and arms. Back ruling regimes. Offer diplomatic cover. Ignore human rights violations. Accept support for violent extremists. And ignore opposition to U.S. interests and objectives.

These nations’ behavior is particularly noteworthy coming after the Trump administration. The president and his aides played the role of the utterly besotted suitor, ready to sacrifice all to satisfy the most outrageous whim of his supposed beloved. Abandon the Iran nuclear deal. Help the Saudis and Emiratis literally kill Yemenis. Support Islamist insurgents, even the local Al Qaeda affiliate, against the Syrian government. Attempt to subjugate Tehran for its neighbors. Treat Palestinians as human detritus. Ignore Riyadh’s perpetually brutal and destabilizing behavior. Reward Gulf and other governments for improving relations with Israel.

What more could Washington have done to show its enduring love?

But when the Biden administration asked for help in confronting the Russo-Ukraine war, several countries declared that they were busy, very busy, and wouldn’t return its phone calls—literally. Giving supposed allies everything they wanted encouraged them to take America for granted. Observed the Century Foundation’s Thanassis Cambanis, “one thing has become clear: Washington’s partners in the Middle East are increasingly confident about taking an independent course, unmoored from—and arguably in defiance of—Washington and seemingly in coordination with each other.”

For instance, for decades the Saudi royals treated the U.S. military as mercenary bodyguards while creating a veritable totalitarian state. America’s almost two-decade long war with Iraq was Washington’s disastrous gift to Riyadh. Yet President Donald Trump’s kowtows got ever lower as the Kingdom of Saudi Arabia’s behavior got ever worse, threatening Qatar with invasion, kidnapping Lebanon’s prime minister, and causing hundreds of thousands of deaths in Yemen. Secretary of State Mike Pompeo even played the role of mob consigliere, protecting Crown Prince Mohammed bin Salman after the latter ordered the gruesome murder and dismemberment of journalist Jamal Khashoggi.

United Arab Emirates was the Saudi partner-in-crime in Yemen. Abu Dhabi was used to getting its way, working with, even manipulating, the Kingdom when necessary. For instance, they cooperated to fix tyranny on Egypt and Bahrain and sought to impose their will on Doha. UAE may be the greatest enemy of democracy in the Mideast.

Israel has enjoyed reflexive U.S. favor for decades. During that time Israel never hesitated to ignore U.S. priorities, for instance cooperating militarily with China and assaulting the JCPOA. Nevertheless, the Trump administration was particularly devoted to Israel in return, also putting the latter’s interests first.

Nor does the regional shift end with these three. Iraq retains significant ties with Iran and voted against the U.N. resolution denouncing Russia. Turkey forged a cooperative relationship with Moscow, confronted the U.S. in Syria, and played an independent role in Libya. It refused to join other NATO members in sanctioning Russia.

One might think that so much effort on behalf of countries that Washington treated as friends as well as allies would have earned a little favor in return. But no. Cambanis wrote:

The divergence has been most apparent in the refusal of the members of the Organization of Petroleum Exporting Countries Plus, or OPEC+, to rapidly increase their oil output amid rising fuel prices, notwithstanding a request to do so by the Biden administration to Saudi Arabia. But it was also on display in Israel’s refusal to send several batteries of the Iron Dome defense system to Ukraine, despite a U.S. request, over fears the transfer would damage relations with Russia. Finally, several states in the broader region abstained on the United Nations General Assembly resolution condemning Russia’s invasion, much to Washington’s displeasure.

That these nations put their interests before those of America should come as no surprise. After all, they have done so in the past. Still, striking is their willingness to ostentatiously flout U.S. requests after all that it has done for them. And that the rebuff was so sharp. Both Riyadh and Abu Dhabi reportedly refused to take the president’s phone call to discuss his request that they hike oil production, a notable affront if true.

Cambanis contended that these nations are not so much abandoning ties to America as rebalancing their relationships. Especially after Washington’s long overdue retreat from its “endless war” policy, Middle Eastern states naturally expanded their diplomatic, economic, and security contacts. Indeed, with Washington’s support they are doing so with each other as part of the so-called Abrahamic accords. The result is a powerful coalition capable of constraining Iran and its friends.

Of greater concern to the U.S., of course, both China and Russia are playing increasing roles, which are only likely to expand in the future. However, that also is inevitable. Moscow has been allied with Syria for decades, has a working relationship with Iran, and once played a large role in Egypt and Ethiopia. It is a major oil producer as well, leading it to coordinate production with OPEC. Although Russia is unlikely to supplant Washington as security guarantor for the Gulf monarchies, the former could eventually play a larger military role.

Even more important is the People’s Republic of China, as a major oil customer and equally significant source of capital. Beijing’s expanded influence reflects what is happening around the world. With the PRC’s increased economic clout has come political deference, similar to Washington’s experience after World War II. However, Beijing has not yet shown any desire to intervene militarily in the region.

Rather than fret over America’s inevitable loss of its unipolar dominance, Washington should use the process to refashion and reduce its commitments. For too long, the U.S. has sacrificed on behalf of regimes that proved to be fair weather friends. The Gulf States always were going to sell their oil. And they always were going to use some of their oil revenues to purchase U.S. weapons. For those benefits there never was any need to put their interests before those of Americans.

Consider the UAE, which apparently is angry that the Biden administration no longer is allowing Abu Dhabi to dictate U.S. policy. Explained Cambanis:

it seems that some of the misalignment of the past week is the result of broader frictions in the partnership. The Emirati ambassador to the U.S. last week described the relationship as undergoing a “stress test.” According to people I spoke to who are familiar with the UAE’s thinking, Abu Dhabi is frustrated over the U.S. position on the war in Yemen and its refusal so far to redesignate the Houthis as a terrorist entity, as the UAE requested following the Houthi attacks on Abu Dhabi in mid-January. The war in Ukraine has simply raised the stakes of that dispute.

UAE and the Kingdom made America an accomplice to war crimes in Yemen. Yet the royal regime, after spending years bombing Yemeni civilians—weddings, funerals, school buses, markets, apartments, and more—expects the U.S. to immunize it from retaliation for its criminal attacks. Apparently, the Emiratis view aggression and murder as royal prerogatives which the victims are not supposed to resist. Accepting, worse, underwriting such behavior is too high a price to pay for Abu Dhabi’s cooperation against Russia. The same with Riyadh, which has played such a destabilizing regional role.

The Biden administration is disappointed, at least, and probably angry at the seeming perfidy of its supposed allies and friends. However, they are simply pursuing their interests, as should the U.S.

Indeed, today’s policymakers should remember George Washington’s timeless advice in his famed Farewell Address: “nothing is more essential than that permanent, inveterate antipathies against particular nations, and passionate attachments for others, should be excluded; and that, in place of them, just and amicable feelings towards all should be cultivated. The nation which indulges towards another a habitual hatred or a habitual fondness is in some degree a slave. It is a slave to its animosity or to its affection, either of which is sufficient to lead it astray from its duty and its interest.”

For too long the U.S. has subordinated its interests to those of other governments. Yet again they have refused to reciprocate. What better moment in a world aflame for President Joe Biden to put the interests of the American people first?