Yet we still keep funding the repressive Sisi regime. Why? 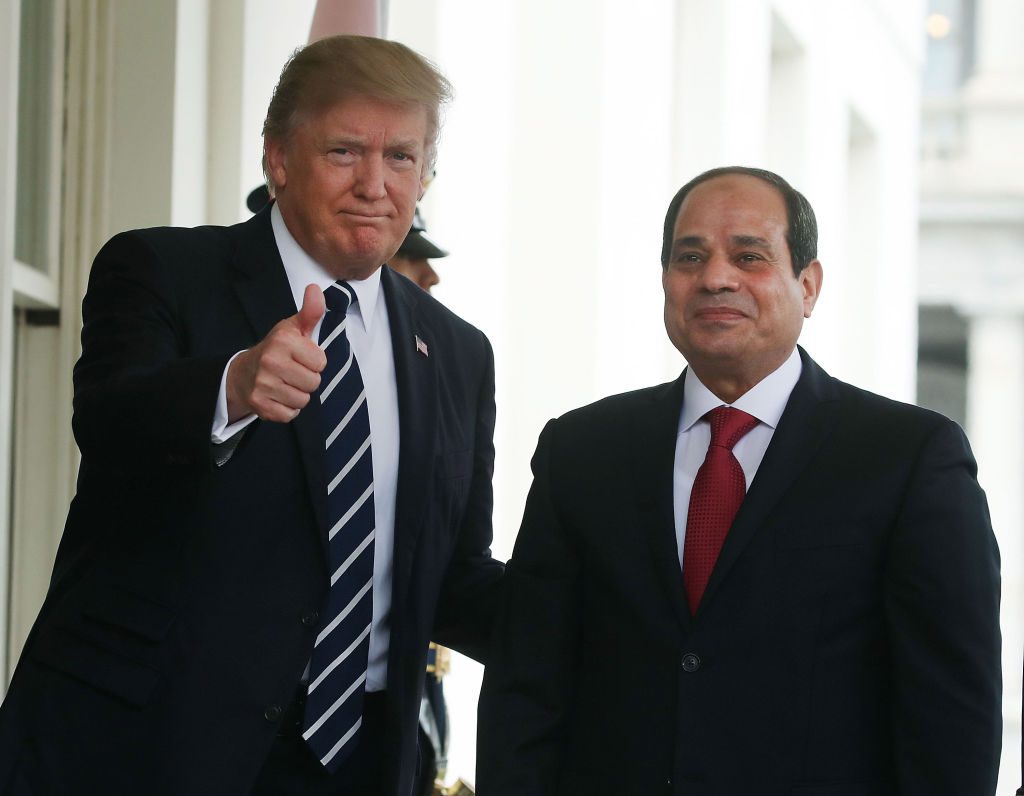 A decade ago, the Egyptian people rose up against the Hosni Mubarak dictatorship. The so-called Arab Spring seemed to offer a bright future. Egypt went on to hold its first free election, elevating Mohammed Morsi to the presidency.

Alas, Morsi, a member of the Muslim Brotherhood, overplayed his hand. Lacking control of the military, police, and bureaucracy, he failed to conciliate liberals, secularists, and religious minorities. In July 2013, barely two years after the Egyptian people freed themselves from one tyranny, they found themselves crushed by another, a military regime run by army commander General Abdel Fattah al-Sisi and financed by Saudi Arabia.

Sisi staged a coup and arrested Morsi, who subsequently died in prison, along with a gaggle of top government, party, and media officials. A month later, Sisi’s forces broke up a protest in Cairo’s Rab’a Square, killing more people than the Chinese government infamously mowed down in Tiananmen Square. Reported Human Rights Watch: “Using armored personnel carriers (APCs), bulldozers, ground forces, and snipers, police and army personnel attacked the makeshift protest encampment, where demonstrators, including women and children, had been camped out for over 45 days, and opened fire on the protesters, killing at least 817 and likely more than 1,000.” Egyptian security personnel also targeted Western journalists, apparently hoping to eliminate witnesses to the massacre.

Ten years on from the beginning of the Arab Spring, the general-turned-president al-Sisi, endorsed by the free world, has made Egypt almost unlivable. There are more than 60,000 political prisoners. Mass trials and death sentences—including for children—are increasingly common. There is torture, enforced disappearances extrajudicial killings. There is no free expression, no political space. Women are frequently targeted. Should we ‘accept’ this reality? After all of this, for many, Mubarak’s Egypt now seems like heaven.

Sisi steadily criminalized any opposition to him or those around him. Financial Times columnist David Gardner observed that the Egyptian dictator “has eliminated all dissent. There is no room in his Egypt for independent opinion or autonomous organizations.” Sisi has promiscuously arrested those who demonstrated against, criticized, or opposed him, or are related those who did so. So assiduous were his minions that his government was forced to construct new prisons to incarcerate everyone rounded up. His brutality has far exceeded that of Mubarak.

Egypt currently requires very little evidence to detain and convict its citizens. For Cairo, vague proximity to events or people is usually enough. The group Freedom House observed: “A series of mass trials in recent years have resulted in harsh sentences, including life imprisonment or the death penalty, based on negligible evidence and most likely related to political motivations.” Indeed, Sisi’s courts are noteworthy for having imposed mass death sentences in mass trials with no showing of individual guilt. In this way, President Donald Trump’s “favorite dictator” has broken new ground.

Yet Sisi still craves the pretense of legitimacy. In 2014, he arranged for a 97 percent election victory, matching the sort of margin claimed by past despots. Four years later, he repeated with 97 percent, after forcing out of the race all but one candidate, who essentially endorsed him. The lucky putative opponents were merely disqualified; the unlucky ones were arrested. Such is the state of Egyptian “democracy.”

The persecution of al-Sisi’s potential challengers in the 2018 presidential election illustrated the regime’s determination to eliminate any opportunity for a peaceful change in leadership. By tightly controlling the electoral process, intimidating presidential candidates into withdrawing, and offering credible opposition parties no significant space to function effectively, the government makes it nearly impossible for the opposition to gain power through elections.

Last year, Freedom House rated Egypt “not free.” Its score from Freedom House, which has been steadily declining, was 21 out of 100. The organization’s judgment is devastating: “President Abdel Fattah al-Sisi, who first took power in a 2013 coup, has governed Egypt in an increasingly authoritarian manner. Meaningful political opposition is virtually nonexistent, as expressions of dissent can draw criminal prosecution and imprisonment. Civil liberties, including press freedom and freedom of assembly, are tightly restricted. Security forces engage in human rights abuses with impunity, and physical security is further undermined by terrorist violence centered in the Sinai Peninsula.”

This judgment is backed by assessments from other organizations. For instance, according to the State Department: “Domestic and international organizations expressed concern that government limitations on association, assembly, and expression severely constrained broad participation in the political process.” Specific crimes were many:

unlawful or arbitrary killings, including extrajudicial killings by the government or its agents and terrorist groups; forced disappearance; torture; arbitrary detention; harsh and life-threatening prison conditions; political prisoners; arbitrary or unlawful interference with privacy; the worst forms of restrictions on free expression, the press, and the internet, including arrests or prosecutions against journalists, censorship, site blocking, and the existence of unenforced criminal libel; substantial interference with the rights of peaceful assembly and freedom of association, such as overly restrictive laws governing civil society organizations; restrictions on political participation; violence involving religious minorities; violence targeting lesbian, gay, bisexual, transgender, and intersex (LGBTI) persons; use of the law to arbitrarily arrest and prosecute LGBTI persons; and forced or compulsory child labor.

Despite Sisi’s policy of coopting Coptic Christians to back his dictatorship, religious liberty remains under constant attack. Explained State, U.S. government officials have “raised a number of key issues, including attacks on Christians, recognition of Baha’is and Jehovah’s Witnesses, the rights of Shia Muslims to perform religious rituals publicly, and the discrimination and religious freedom abuses resulting from official religious designations on national identity and other official documents.”

Equally harsh was the judgment of Human Rights Watch. It reported that Sisi’s constitutional amendments “consolidate authoritarian rule, undermine the judiciary’s dwindling independence, and expand the military’s power to intervene in political life. Security forces led by the military continue to brutalize civilians in North Sinai in its conflict with Sinai Province, an armed group affiliated with the extremist group Islamic State (ISIS). The army and pro-government militias carried out serious abuses, including demolishing homes and arbitrarily arresting, torturing, and extrajudicially executing residents.”

In addition, “Under the guise of fighting terrorism, Egyptian authorities showed utter disregard for the rule of law. Since April 2016, President Abdel Fattah al-Sisi has maintained a nation-wide state of emergency that gives security forces unchecked powers. Security forces used torture and enforced disappearances systematically against dissidents from all backgrounds. Egypt’s use of mass trials and the death penalty has mounted since 2013, including death sentences against children and death sentences issued in military trials.”

This is an appalling record, financed by American taxpayers. President Barack Obama felt some guilt about working with the bloody, repressive Sisi regime. Not Donald Trump, who ostentatiously gloried in the criminality of U.S. allies. However, the Biden administration is unlikely to give Sisi a similar pass, despite Cairo’s fading claim to be a critical strategic ally. Last year, candidate Joe Biden vowed “no more blank checks for Trump’s ‘favorite dictator.’”

The new president should start by cutting off American aid, especially for weapons. This won’t change Sisi’s behavior—regime survival is his paramount goal, and the Saudis could step in with additional financial contributions to Cairo—but it would stop making Americans complicit with his crimes. It would also signal that Washington’s displeasure is more than rhetorical.

That matters because a population subject to steadily escalating repression will otherwise naturally identify the dictatorship with America. Mubarak was known to be a U.S. “friend.” Better that the population see Washington as critical of Sisi, especially since al-Qaeda operatives and other Islamist extremists were radicalized in Mubarak’s jails. A similar process likely is at work today. H.A. Hellyer of the Atlantic Council worries that “by closing the space for expressing dissent openly, the possibility is that something far more chaotic than 2011 becomes more likely.” Similar was the concern of Philip Crowley, formerly at the State Department: “the seeds of the revolution are budding in Egypt.”

There is little downside to ending U.S. aid for the regime. There is no reason to expect even the best-intended grants to be used well. Gardner complained that “Mubarak surrounded himself with some first-rate advisers, especially in foreign policy. Al-Sisi seems to prefer yes-men, and is said by former colleagues to listen mainly to military intelligence and a security cell attached to a cabinet he largely ignores.”

Washington has gotten little in return for its assistance. Anyway, the Egyptian armed forces would have to continue coming to America for spare parts for their U.S.-supplied weapons, if nothing else. As for preserving peace with Israel, Cairo’s praetorians won’t go to war if Washington stops bribing them. Egypt’s generals are not warriors. They are a wealthy, influential, political caste busy looting the economy through a multitude of privileged business enterprises. The last thing they want is conflict.

That is one reason the armed forces oppose civilian political control. In fact, during the Arab Spring, the generals turned against Mubarak because he appeared ready to turn a military dictatorship—from which he, like his predecessors, sprang—into a family-dominated one-party state, headed by his son, Gamal. Worse for Egypt’s military elite, Mubarak fils had ideas of economic reform that would have threatened the military’s business interests. Explained Gardner: “Under Mubarak, many private companies found it expedient to have an army officer on the board. But under al-Sisi, Egypt’s economy is coming to resemble a military business empire encompassing everything from poultry and fish farms to holiday resorts and gyms, as well as chemicals, cement and construction.”

Modern Egypt inherited a great civilization. All that remains now is a selfish, corrupt, hateful dictatorship. Ultimately, only Egyptians can free themselves. However, Washington should stop funding their oppressors.