Where Trump’s Latino supporters were—and why they voted for him. There’s no political question as consistently in vogue among a certain class of conservative intellectuals as “Why aren’t Hispanics more conservative?” The perennial springs up every election cycle.

In 2012, after the painful defeat of Mitt Romney, the accepted wisdom was that Hispanics needed to be pursued through moderation on immigration. “If Hispanic Americans perceive that a GOP nominee or candidate does not want them in the United States, they will not pay attention to our next sentence,” stated the post-election “autopsy” produced by the Republican National Committee in 2013.

But the swing among Hispanic Americans toward Trump in 2020 was unexpected by most, and has therefore been dissected especially vigorously. The regnant wisdom today, to the extent there is one, is that Trump turbocharged the GOP’s turn to becoming a multiethnic workers party. In this telling, Trump bled white suburbanites, but his gains among ethnic minorities suggested the GOP had done something right, perhaps a more muscular fight against traditional elites.

It’s a compelling narrative that contains some truth. The trend toward the GOP in 2020, a surprise for those who thought Trump was a political toxin, suggests we have lessons to learn.

But those lessons are complicated, and the nature of Hispanic voting patterns in the 2020 election means that national-level explanations for the swing may be insufficient.

The more one digs into the data, the more one finds difficulty in describing Hispanic voters as a block at all.

Take Texas. Aggregating data from the New York Times and local precincts, we see the major Hispanic shift that wowed pundits on election night and beyond. Yet the shift in Texas was heavily localized, hitting places like Starr County along the Rio Grande and largely dissipating in counties farther north of the border. Notably, Hispanic voters shifted harder toward Trump in more Hispanic counties. Starr County, deep red at the bottom, voted nearly 30 percent more Republican in 2020 than in 2016. By contrast, the mean shift in vote from 2016 to 2020 in Texan Hispanic majority counties was 7.5 percent. The graph shows a clear pattern: Rio Grande counties and those in Texas’s southern tip swung by more than 10 percent, while East Texas Hispanics shifted less. 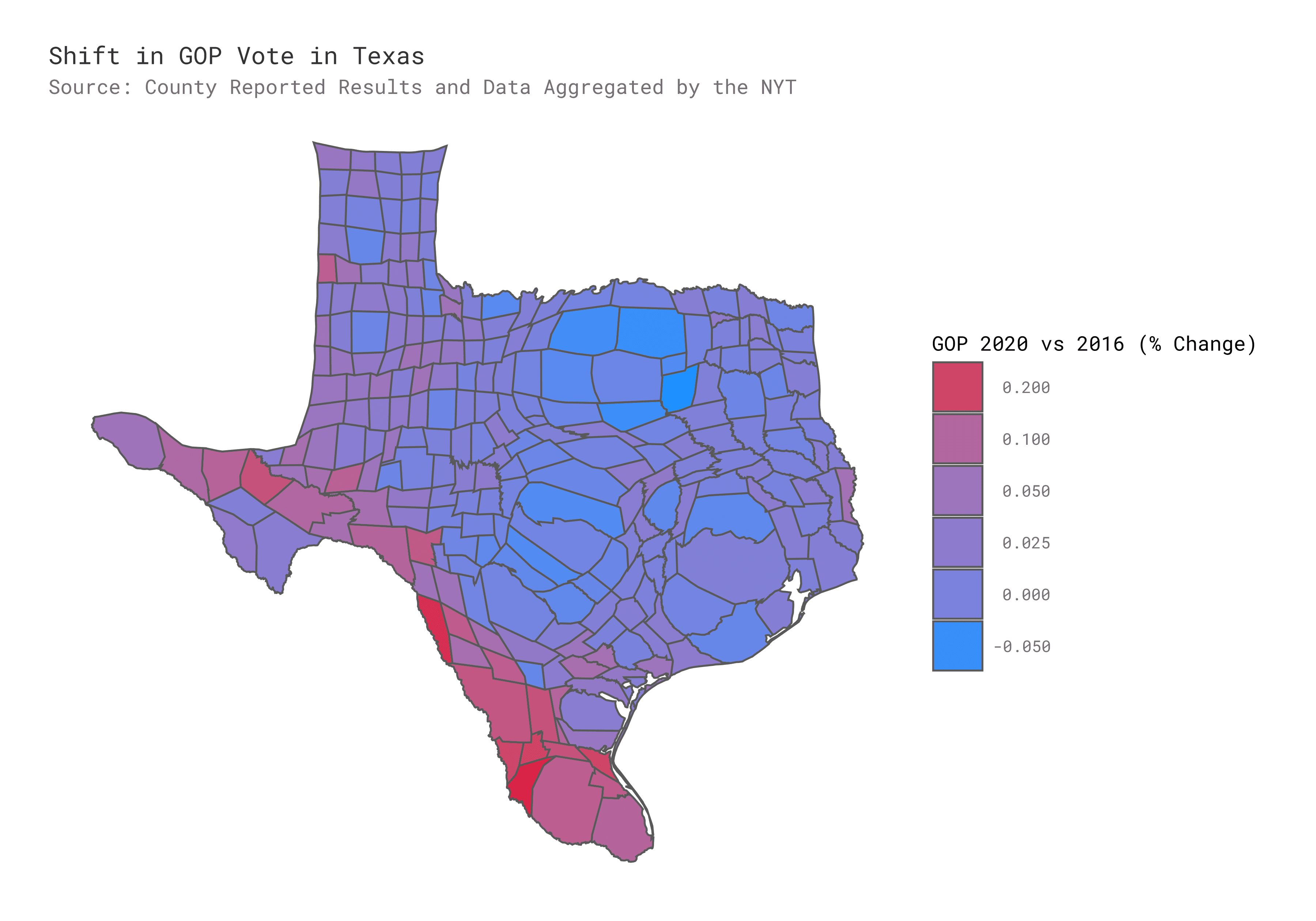 But while the GOP gained these voters, it lost votes in places where more people live. Examples abound. Big suburbs like Tarrant County voted for Trump in 2016, but not in 2020. Outside of the Rio Grande Valley, non-Hispanic majority counties shifted toward Biden, enough to give Biden a gain of about 4 points on Clinton’s performance. Grand election narratives may be overdetermined, but “Biden gained with suburban moms, Trump gained with POC workers” broadly describes the Texas story.

What motivated Hispanic voters? Polls during the runup to the general election from the Texas Politics Project shed some insight on how Hispanic voters, Democrat and Republican, saw major issues in the race. While there are some commonalities, the percentage of each group holding these issues is very different. A quarter of Hispanic Democrats viewed Covid-19 as the most important issue, versus 15 percent of Hispanic Republicans.

It’s striking how similar Texas Hispanic Republicans are in their top priorities to members of the GOP across the country. On the national level, they are concerned about the media, abortion, and general moral decline. On the local level, immigration and border security are both present.

The divergences among Hispanic and other Republicans give us a general sense of what worked best for capturing Hispanic voters. These voters cared substantially less about federal spending, the debt, and political corruption, but cared more about the economy.

Unfortunately these polls don’t break down by region, but we can intuit some takeaways. Traditional GOP bugbears such as the deficit or national security aren’t concerns among these Hispanic Republicans (but not border security!). Much like their non-Hispanic co-partisans, they’re concerned about the media, the economy, and immigration policy, with the economy chief among those issues.

Notably, Hispanic Republicans became especially interested in economic issues over the summer. If there’s one consistent takeaway through the data, it’s that these voters were energized by the debate over lockdowns amid the pandemic. By contrast, voters already in the Democratic column barely moved over the course of the summer: reopening became a highly motivating issue for one side, but not the other. The swing toward Trump in Miami was somewhat better understood in traditional media. Crypto-con Matthew Yglesias accurately pointed out in Vox the city’s “deep emotional and intellectual investments in the Latin American Cold War.” Politico expressed concern that memes and “disinformation” were being trafficked to Florida Hispanic communities in WhatsApp groups, and quoted locals who claimed they were centrally coordinated. The concern was at least partially founded: The Trump campaign invested deeply in organic messaging to Miami’s Hispanic communities.

Far from simply focusing on Cuban voters, the campaign emphasized issues that mattered to a wide range of constituencies: countering dictatorship to Venezuelans, culture war issues to evangelical Latinos, and economic reopening across the board. Some analysts believe Trump won half of all non-Cuban Hispanics there. (While there’s no data for this observation, surely it also helped that the messaging was fun, such as the catchy campaign jingle produced by “Latinos por Donald Trump.”)

In Texas, the same pattern emerged: Trump did best among the communities his campaign reached out directly to and in areas where his administration clearly improved the working lives of voters.

At least in the Texas case, Trump really did grow the pie, bringing in voters who generally didn’t come to the polls. An Equis postmortem analysis found that swing voters in the Rio Grande valley were especially likely to be non-regular voters: 57 percent of early and absentee votes in the valley came from voters who had participated in one or fewer of the last three elections.

Which makes the GOP’s lack of outreach to Hispanic voters in other cases all the more mystifying. In Georgia, Hispanics are more than 10 percent of the population. Biden’s vote margin among Hispanics was about 60,000 votes more than John Ossoff’s margin in November, meaning Republicans had a unique opportunity to peel away Democrat voters skeptical of the Senate nominee.

Yet the party consistently messaged that the runoff was a “turnout” election, and that the most effective use of time and energy was in reaching the base. Immediately after the general election, one longtime political operative sent a lengthy memo to the National Republican Senatorial Committee, offering his services pro bono to organize contacts from the Hispanic Chamber of Commerce and other Hispanic organizations. The memo outlined how little financial investment was needed: The main thing was to organize voters who were already interested. He was gently but firmly rebuffed. Backed by a wave of small- and large-dollar donations, Democrats blanketed Spanish-language TV and radio. On January 5, Ossoff beat his opponent by under 55,000 votes.

Hispanic majority counties that border Mexico shifted more towards Trump than those not on the border. Our data gives no special insight into this seeming conundrum, because issue polling does not break down by region. Some pundits point out the high number of Hispanics employed by the Border Patrol, but that explanation is clearly insufficient to capture the size of the swing toward Trump. More salient is the class makeup of these communities: rural workers, Hispanic or otherwise, broke heavily for Trump.

The 2013 GOP autopsy was correct in one sense: Hispanic voters are there to be won. The 2020 election shattered the perception that Hispanics en masse have a red line on immigration (or at least on restrictive immigration policies in practice). For Hispanics in the Texas Republican coalition, immigration was a more important driver of their voting than for non-Hispanics. We can’t draw a straight line from GOP gains with Hispanics to its losses in largely white suburbs—elections are strategically rare enough to deny definitive explanations to armchair pundits—so the intra-conservative debate will continue. Skeptics of a political realignment will argue that Covid-19 and the battles over reopening created a unique opportunity for Trump-hesitant Hispanics to join his column. Believers in a “working class GOP” may see the partisan rifts over reopening as a bellwether for future political battles over state control, with increasing numbers of political minorities finding cordon sanitaire regulation unappealing.

One pat interpretation of the above was offered by liberal media on the night of the election, and has seeped into the public consciousness since: racial minorities vote for Trump as they become more culturally white. “Latino is a contrived ethnic category that artificially lumps white Cubans with Black Puerto Ricans and Indigenous Guatemalans and helps explains [sic] why Latinos support Trump at the second highest rate,” tweeted Nikole Hannah-Jones of the New York Times on November 4.

Which suggests that perhaps Hispanic racial identity is so amorphous as to be of limited usefulness in electioneering for Republicans. The Trump team increased its support in Hispanic communities by speaking directly to them and by emphasizing issues important to those communities. That approach, not any racialized appeal, is the way forward.

Santi Ruiz is a staff reporter at the Washington Free Beacon.