The Dangerous Reality of an Iran War 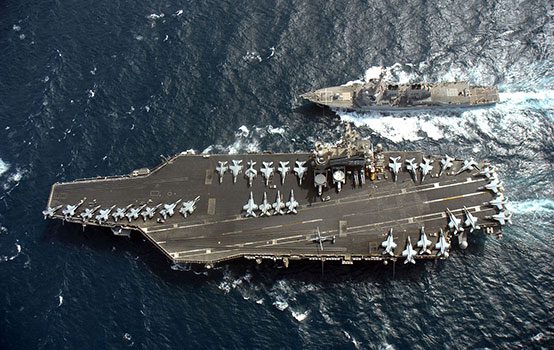 BEIRUT—After weeks of saber-rattling over Iran as the “number one terrorist state” in the world, the Trump administration appears to have quietly dialed down the rhetoric a notch.

Here in the Middle East, however, where every peep and creak out of Washington is scrutinized to death, interested parties haven’t stopped speculating about a U.S. confrontation with Iran. Fifty days into his term, Trump’s foreign-policy course remains an enigma. He swears “all options” remain on the table with Iran—but do they?

There are already some early actions that hint at Trump’s policy directions—and limitations—in the Middle East. In three key military theaters where U.S. forces are currently engaged, some important corners have been turned:

In a few short weeks, Trump has taken an axe to Obama-style dawdling in Mideast hotspots—whether by taking direct action or by no longer impeding the actions of others.

What’s notable is that all of these developments, at face value, serve Iran’s interests in the region and undermine those of U.S. allies Turkey and Saudi Arabia.

But don’t be fooled. This is merely Trump’s opening salvo. He has larger, unknown ambitions, and these recent moves do not necessarily remove Iran from his sights.

The Islamic Republic, its allies, and its detractors will remain part of Trump’s larger geopolitical game. He can use them to engage or punish more vital targets like Russia and China, two major powers that have carved out strategic relationships with Tehran. Iran will also be a useful tool to provoke or cajole traditional U.S. allies like Israel, Turkey, and various Arab monarchies into taking positions favored by Trump.

Already, several threatening U.S. stances have been employed—their ultimate aims unknown—with Iran at their center. There are whispers of a Saudi-led “Arab NATO” that could partner with Israel to target Iran. And calls for Damascus and Moscow to eject Iran from Syria are being heard from various western and western-allied Mideast capitals.

The Waterways: An “Accidental” Confrontation

Despite the Iran-as-bogeyman narrative, it is unlikely that Trump will launch any direct military attacks against Iran. This is a president who has voiced contempt for the $6 trillion wasted on Mideast wars and interventions. More confrontation in the region will be costly, and is likely to draw him into clashes with major powers with which he’d prefer to do business.

Although he insists “all options” remain on the table with Iran, Trump’s choices are actually fairly limited. Sanctions never worked and the Iran nuclear deal has ensured that other global players needn’t participate in future ones. Under pressure from allies, he has backtracked on his threats to scuttle the nuclear agreement, which he now seems to understand would needlessly isolate the U.S., not Iran. Subversive activities—such as color revolution plots, propaganda, or cyberwarfare—have proven futile given Iran’s historic vigilance on and within its borders. Conventional war would require a substantial Iranian provocation and isn’t likely to be sanctioned by the UN Security Council.

But there is one theater in which a U.S.-Iran confrontation could easily spark: the various waterways around the Islamic Republic and its neighborhood.

Both countries have plenty of naval and shipping vessels in close daily proximity to each other. Tensions are high, rhetoric remains inflamed, and Iran’s foes in the Persian Gulf and Washington are in a great position to trigger an event, then fan its flames.

Defense Secretary James Mattis, a committed Iran hawk, almost did so several weeks ago when he considered letting U.S. forces board an Iranian ship in Arabian Sea international waters, according to a passing mention of the incident in the New York Times. But the Intercept understood the import of the close encounter and led with the headline: “Trump’s ‘moderate’ defense secretary has already brought us to the brink of war.”

War is indeed a distinct possibility if the U.S. makes an aggressive move.Iran is no banana republic. It has endured an eight-year war with Iraq, which was encouraged, financed, and armed by great powers and regional states alike. The Islamic Republic performed a remarkable claw-back from the assault and went on to amass conventional and asymmetrical capabilities to deter future attacks.

So when Trump saw fit to slap sanctions on Iran after a January 29 ballistic missile test, Iranians made sure to fire off more, just a day after sanctions were announced. And the Iranian responses keep coming, a reminder that any military confrontation with Iran will be highly unpredictable. The Islamic Republic makes sure to remind us of its overt and hiddencapabilities through regular public missile tests, advanced air defense demonstrations and war game exercises, such as the just-concluded Velayat 95drills in the Strait of Hormuz, Sea of Oman, and Indian Ocean.

As tensions between the U.S. and Iran have increased, so have the number of gulfs, straits, seas and oceans in which the two nations’ navies and commercial vessels now operate. The Pentagon insists its naval presence in so many far-flung west Asian waterways is vital to thwart terrorism and piracy. But this is Iran’s backyard, and the Islamic Republic needs little justification to police regional waterways against these very same kinds of threats—and to protect its own territorial and maritime borders.

During a November visit to Tehran, I asked Dr. Sadollah Zarei, director of the think tank the Andisheh Sazan Noor Institute and a MENA expert close to the IRGC, about this. “U.S. actions give us a behavior precedent in our naval reach,” he said. The U.S. naval presence in Iran’s neighboring waters “gives us even more right to be active in the Persian Gulf, in the Gulf of Aden, and other waters.” As a result, Zarei explained, “we are now in the Gulf of Bengal and the Indian Ocean.”

Is Zarei worried about an adversary state brandishing its vast military firepower within spitting distance? He cracks a smile and explains calmly: “When the U.S. is there, Iran’s focus and discipline is better. They’re useful that way. It brings us together, creates support for our security forces, our army, our borders.”

On the other side of the fence, Washington continues to feed this Iranian discipline and cohesion by elevating recent “incidents” in the waterways—mostly unrelated to Iran—into national media hysterics about Iran.

Investigative reporter Gareth Porter has worked to untangle fact from fiction over U.S. accusations that Iran is shipping arms to Yemen’s Houthi rebels through some of these waterways. In short, Porter hasshownthat most of the Pentagon’s claims appear to be demonstrably false. And because of Wikileaks’ 2010 State Department cables cache, we now know that—in private at least—U.S. officials are also skeptical of their own public charges.

The Unpredictability of a Waterways War

In January 2016, two U.S. navy command boatsentered Iranian territorial waters—it’s unclear if knowingly or unwittingly—and were apprehended by Iranian Revolutionary Guards. Americans watched as Iranian television broadcasted the capture of 10 U.S. navy sailors on bended knees, hands behind their heads. The Islamic Republic followed maritime regulations and international law in their actions, and released the officers shortly thereafter. But the incident brought home, in technicolor, the unpredictability of waterways operations against this wily U.S. adversary.

For decades, the Pentagon has run war games against Iran to test its assumptions and hone its responses. But an acquaintance who has participated in such CENTCOM exercises told me last year that “the U.S. military rarely beats Iran in asymmetrical war games unless it cheats or rigs it.”

Shocked, I was prompted to dig deeper and discovered the “Millennium Challenge,” a 2002 U.S. armed forces war game in the Persian Gulf between the U.S. (blue team) and an unnamed Mideast adversary (red team), believed to be Iran.

According to retired Marine Corps Lt. Gen. Paul Van Riper, who led the Red’s asymmetrical response—and resigned because rules were changed mid-play to constrict his team’s maneuvers—Reds bypassed Blue’s sophisticated electronic surveillance system using motorcycle messengers sent to the frontline and World War II-style signaling methods, and then destroyed 16 U.S. warships and a significant chunk of its naval fleet—all on the second day of the three-week exercise.

In an article entitled “War Games Rigged?” published on the Navy, Marine and Army Times websites (which appears to have been removed and is reposted here), Van Riper slammed the $250 million war game: “It was in actuality an exercise that was almost entirely scripted to ensure a Blue ‘win.’”

Van Riper explains: “We were directed… to move air defenses so that the army and marine units could successfully land. We were simply directed to turn [air defense systems] off or move them… So it was scripted to be whatever the control group wanted it to be.”

Rather than learning from the exercise, the U.S. military seemed more interested in confirming existing doctrine and maintaining the facade of invincibility. These are dangerous attitudes that, in real-life combat scenarios, can lead commanders to misjudge capabilities and make foolhardy advances. And Iran knows this well.

The Cost of Primacy

Why are U.S. armed forces in the Persian Gulf anyway? Princeton University’s Roger Stern calculates that between 1976 and 2010, Washington has spent an eye-popping $8 trillion protecting the oil flow in the Persian Gulf. As of 2010, the U.S. only received 10 percent of those oil shipments. The largest recipients were Japan (20 percent), followed by China, India, and South Korea.

Trump should take note: if access to oil was the real goal of U.S. presence in the Gulf, Washington could have achieved it at a fraction of the cost by building pipelines to bypass that waterway.

Instead, mission creep has overtaken U.S. policy in the Persian Gulf, establishing a policy trajectory few American presidents have dared to challenge. Of the eight littoral states of the Persian Gulf, Iran has the longest coast on the waterway, almost double the length of its other seven neighbors combined.

As Washington hawks continue to insist that Iran cannot be allowed to challenge U.S. hegemony in the Persian Gulf, they should first ponder the potential consequences of another avoidable war—before a catastrophe humbles them into silence.