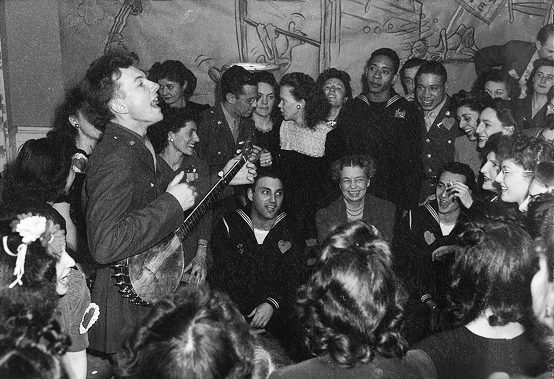 The Penguin Encyclopedia of Popular Music described the politics of Pete Seeger, the folk-singer, songwriter, and antiwar activist who died last week at the age of 94, as “naïve but honest.” They were certainly honest—not even Seeger’s worst enemies would dispute that—but what was naïve about Seeger’s socialist conservatism?

Seeger was the authentic voice of the old American left and understood that conservatism, far from being inimical to socialism, was actually an essential component of it. In an interview with the New York Times in 1995 he declared, “I like to say I’m more conservative than [Barry] Goldwater. He just wanted to turn the clock back to when there was no income tax. I want to turn the clock back to when people lived in small villages and took care of each other.”

Seeger’s vision of the ideal society was not some high-tech futuristic metropolis but was rooted firmly in the past. America’s past. “When I was a boy, I read every single book by naturalist Ernest Thompson Seton,” he said in a 1982 interview.

Seton held up the Indian as an ideal … for strength and dignity, morality, selflessness, and living in tune with nature. Anthropologists call the period of Indian history that he described ‘tribal communism’ … I like to think I’m about as much a communist as the average American Indian was… .

Seeger was described in the New York Times interview as a man “so far left politically he has probably never been called a liberal.” It’s a wonderful compliment, which any genuine socialist would be proud of. Me-first liberalism—both the economic and social variety—infected the Western Left from the 1960s onwards, but Seeger wasn’t fooled.

The late Eugene Genovese wrote of “the irrational embrace by the Left of a liberal program of personal liberation.” But the irrationality served the Wall Street money men and the serial warmongers well, as it got large sections of the left to ditch their socialism, their unionism, and their opposition to imperialist wars of aggression and to focus instead on issues that did not disturb or threaten the citadels of power.

Seeger campaigned for civil rights, but he rejected culture wars and futile intergenerational battles. Socialism for him wasn’t about a battle between teenagers and their parents (one of his songs was called “Be Kind to Your Parents,” instructing to “treat them with patience and kind understanding”) but about people coming together, regardless of their age, sex, color, or creed, to build a kinder and more caring society where people—and the planet—came before profits. Seeger’s Old Left politics were about countering the forces in our society that were encouraging selfishness and materialism and pushing us towards perpetual war and environmental destruction.

While the New Left embarked on its cultural revolution and sought to destroy everything from the past, Pete wanted us to rediscover and reconnect with the simpler lives our ancestors lived. “I can only say that I’m more distrustful of technology now than I have been at any point in my life,” he said in 1982. “I honestly believe that if I’d been around when some person was inventing the wheel, I’d have said, ‘Don’t, don’t. Life may be nasty, short, and brutish … but you just can’t know where technology is going to lead.’ Well, we do know where it’s leading now … it’s heading us toward disaster.”

In the same interview he gave his thoughts on the word “progressive”:

I guess the idea of progress has been oversimplified. Someone will say, ‘We must be progressive … we must have [flush] toilets. Don’t use the backyard privy anymore.’ Well, the backyard privy isn’t the only alternative to the flush toilet. How about composting toilets or methane digesters? I think one of the most ‘progressive’ events that’s taken place in America in the last ten years is the rediscovery—on the part of millions of people—that it’s fun to grow and cook their own food instead of opening a can from the supermarket.

Seeger rejected the egotism of the modern elbow society which neoliberal capitalism has created. “There was no ‘I’ in Seeger’s music, only a big, broad encompassing ‘we’” writes Jody Rosen. Seeger never liked to talk in terms of his career. “I hate the word ‘career’ because it implies one is searching after fame and fortune—two of the silliest things to want,” he said. He abhorred commercialism. When he was given a microphone he used it to forward the causes he believed in—and not push a new album or CD.

Seeger was passionate about the causes he believed in, but his politics were based on love and not hate. “The shortsighted people say, ‘We know how to solve the problems. We get the proper explosive in the right place, and they’ll learn.’ I say, ‘All they’ll learn is how to be violent.’ To quote Martin Luther King, the weakness of violence is that it always creates more violence. Darkness cannot drive out darkness. Only light can do that. Hate cannot drive out hate. Only love can do that,” he said.

While the “progressive” liberal left—having made their attacks on “the forces of conservatism”—linked up with the neocons to launch a series of wars boosting Wall Street profits under a fraudulent humanitarian banner, Pete kept on asking: “Where Have All the Flowers Gone?” He knew that a humanitarian military intervention was a contradiction in terms.

He was a better socialist than the Trotskyite ideologues who accused him of being a Stalinist, and he was a better conservative than the McCarthyites who persecuted him. He understood, probably better than any other figure on the American Left, that in order for the human race to go forward we need to go back. Way, way, back.

Of all the many tributes we’ve heard to Seeger on his death, it’s this one by Robert Foxx in the Guardian that I think tells us the most: “He always said hello when I passed him on the street at the river’s landing. I will always remember him as a gentle and kind man, singing with his face raised to the sky.”