Instead of holding the federal government accountable, the media have become its largest enablers. 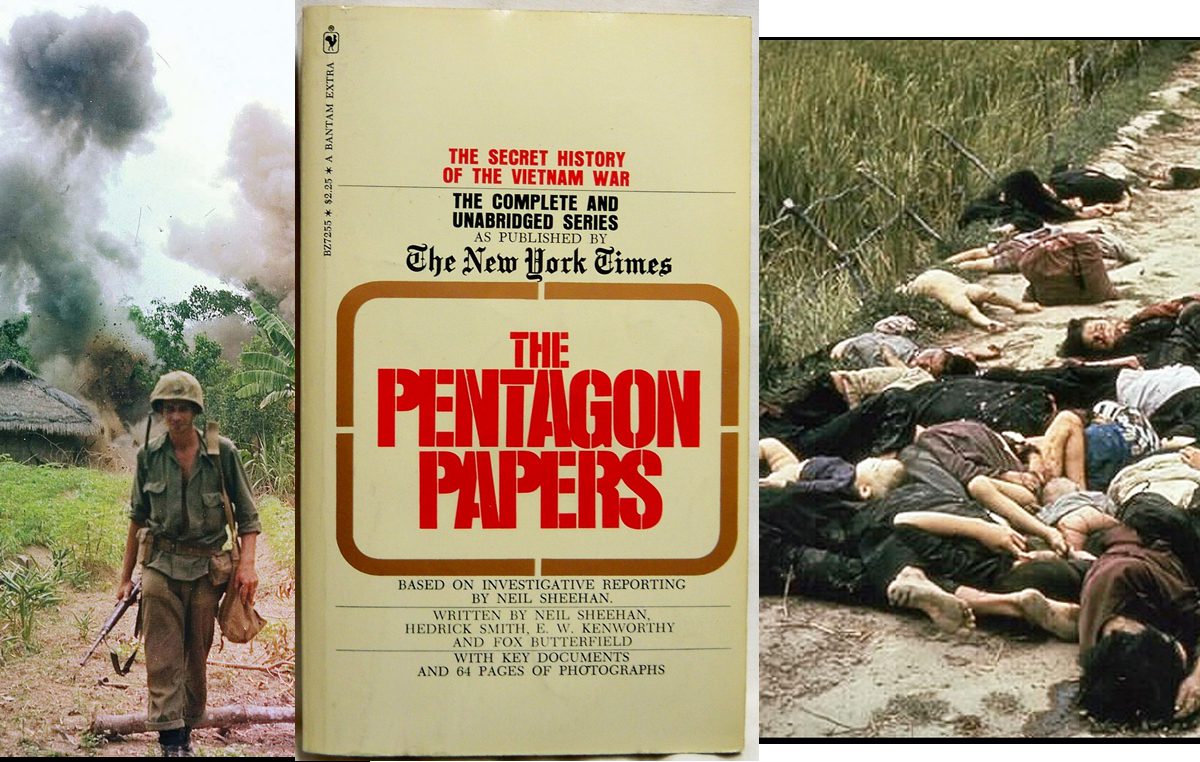 Fifty years ago, the New York Times began publishing excerpts from a massive secret report called the “History of U.S. Decision-Making Process on Vietnam Policy.” Those excerpts, which quickly became known as the “Pentagon Papers,” provided shocking revelations of perennial government deceit and spurred an epic clash over the First Amendment. Unfortunately, many of the media outlets that will celebrate the Pentagon Papers anniversary have long since become lap dogs of perfidious politicians dragging America into new foreign conflicts.

The report that became the Pentagon Papers was a secret study begun in 1967 analyzing where the Vietnam War had gone awry. The 7,000-page tome showed that presidents and military leaders had been conning the American people on Southeast Asia ever since the Truman administration. Like many policy autopsies, the report was classified as secret and completely ignored by the White House and federal agencies that most needed to heed its lessons. New York Times editor Tom Wicker commented in 1971 that “the people who read these documents in the Times were the first to study them.”

Unfortunately, few Washingtonians bothered to read the Pentagon Papers after their disclosure and missed lessons that could have spared the nation fresh debacles. More than 30 years before the Bush administration exploited the 9/11 attacks to invade Iraq, the Kennedy and Johnson administrations dishonestly exploited alleged terrorist attacks to justify boosting U.S. military intervention in Vietnam. After its troops gunned down dozens of people at a Buddhist protest in 1963, the government of South Vietnam falsely claimed it was a Viet Cong terrorist attack. President Lyndon Johnson told Congress on May 18, 1964 that “the Viet Cong guerrillas, under orders from their Communist masters in the North, have intensified terrorist actions against the peaceful people of South Vietnam. This increased terrorism requires increased response.” At that time, the U.S. was carrying out an array of “non-attributable hit-and-run” raids against North Vietnam, including providing American planes that Thai pilots used to bomb and strafe North Vietnamese villages a few months later. But U.S. aggression was kept secret from both Congress and the American people.

The Pentagon Papers detailed how President Johnson invoked a supposed North Vietnamese attack on a U.S. destroyer in the Gulf of Tonkin in August 1964 to ram a resolution through Congress to give him unlimited authority to attack North Vietnam. Johnson had decided earlier that year to attack North Vietnam to boost his election campaign, and the resolution had been written months earlier and was awaiting a pretext for introducing it on Capitol Hill. The Pentagon and White House quickly recognized that the core allegations behind the Gulf of Tonkin resolution were false but continued exploiting the charges to vastly expand the war. The Pentagon Papers noted that Johnson’s first massive bombing of North Vietnam in August 1964 resulted in “virtually no domestic criticism.”

The Pentagon Papers should have spawned permanent, radical skepticism concerning the candor and competence of U.S. foreign interventions. Philosopher Hannah Arendt observed that the Pentagon Papers revealed how “sheer ignorance of all pertinent facts and deliberate neglect of postwar developments became the hallmark of established doctrine within the Establishment.” That internal study also revealed how deceit became institutionalized. Daniel Ellsberg, who wrote a portion of the papers, noted that the documents reveal “a general failure to study history or to analyze or even to record operational experience, especially mistakes. Above all, effective pressures for optimistically false reporting at every level, for describing ‘progress’ rather than problems or failure, concealed the very need for change in approach or for learning.” Georgetown University professor Derek Leebaert observed that the U.S. military floundered in Vietnam in part because “it had forgotten everything it had learned about counterinsurgency in Korea.” The accolade of “The Best and the Brightest” received far less derision than it deserved.

Ellsberg, a former Pentagon official, risked life in prison to smuggle the report to the media after members of Congress were too cowardly to expose it. The Nixon Justice Department speedily secured a court injunction blocking the New York Times from continuing to publish excerpts. The Washington Post and other newspapers quickly began publishing additional classified excerpts, setting up a Supreme Court showdown on the First Amendment.

The Nixon administration claimed the president had “inherent authority” to censor news related to national security, regardless of the First Amendment. On June 30, 1971, the Supreme Court ruled 6-3 that the newspapers had the right to publish the classified documents. Justice Hugo Black wrote that the First Amendment protected the media because “only a free and unrestrained press can effectively expose deception in government.” Black declared, “The Government’s power to censor the press was abolished so that the press would remain forever free to censure the Government.” Many pundits and professors responded to the “forever free” dicta like Confederate enthusiasts who believed General P.T. Beauregard’s victory at the Battle of First Bull Run settled the outcome of the Civil War.

The Pentagon Papers proved that politicians and bureaucrats will brazenly con the American public into unnecessary wars. But that lesson vanished into the D.C. memory hole—conveniently for obsequious journalists like Post superstar Bob Woodward. In 2002 and 2003, the Post buried pre-war articles questioning the Bush team’s hysterical allegations on Iraq. The Post’s award-winning Pentagon correspondent Thomas Ricks complained, “There was an attitude among editors: ‘Look, we’re going to war, why do we even worry about all this contrary stuff?’” Instead, before the war started, the Post ran 27 editorials in favor of invasion and 140 front page articles supporting the Bush administration’s case for attacking Saddam.

Television networks out-groveled print media. CNN chief news executive Eason Jordan boasted that he went to the Pentagon shortly before the invasion of Iraq and got “a big thumbs-up” for the generals he planned to use as cheerleaders for the war. Before the war, almost all the broadcast news stories on Iraq originated with the federal government. PBS’s Bill Moyers noted that “of the 414 Iraq stories broadcast on NBC, ABC, and CBS nightly news, from September 2002 until February 2003, almost all the stories could be traced back to sources from the White House, the Pentagon, and the State Department.” NBC news anchor Katie Couric stated that there was pressure from “the corporations who own where we work and from the government itself to really squash any kind of dissent or any kind of questioning of it.” The same elite journalists who portrayed themselves as champions of truth laughed heartily at the 2004 Radio and Television Correspondents annual dinner when President Bush performed a skit joking about how he couldn’t find missing Weapons of Mass Destruction in Iraq.

Five years ago, Washington Post reporter Dana Priest, who broke some of the most damning stories of the George W. Bush era, asked in the Columbia Journalism Review, “Did the Pentagon Papers Matter?” Priest noted, “In honor of the Pentagon Papers, perhaps the first item on that long list of things we still don’t know should be finding the truthful analysis of America’s war on terrorism 15 years later, with no end in sight.” Don’t hold your breath: the game is rigged worse than ever. In the wake of the 9/11 attacks, the Bush administration dropped an iron curtain around federal agencies and the number of classified government documents increased tenfold. Federal agencies are now creating trillions of pages of new secrets each year, and each page is backed by a federal fist waiting to crush anyone who makes an unauthorized disclosure. Official secrecy enabled the deceit that led to the Iraq War, sweeping illegal surveillance, a worldwide torture regime, and the Syrian Civil War debacle—in which Pentagon-backed Syrian “rebels” battled CIA-backed Syrian “rebels.”

H.R. Haldeman, Nixon’s White House chief of staff, warned Nixon in 1971 that the Pentagon Papers might make people believe “you can’t trust the government; you can’t believe what they say; and you can’t rely on their judgment. And the implicit infallibility of presidents, which has been an accepted thing in America, is badly hurt by this.” Unfortunately, much of the media continue to presume that presidents are infallible when attacking foreign nations. As Jon Schwarz wrote in 2016 in The Intercept, “Time and again, the Washington press corps has credulously accepted officials’ lies and misinformation, and passed them on to their readers as the truth. Their  real-time skepticism is almost nonexistent. And they keep doing it.”

The mainstream media nowadays often show more distrust and indignation about peace than about war. The Trump administration faced thunderous media backlash for its attempts to withdraw American troops from Afghanistan, Syria, and even Germany. Columnists from the New York Times and Washington Post openly championed the deep state because the CIA, FBI, and other intelligence agencies appeared to be undermining President Trump.

Ellsberg’s courage will rightly be celebrated by many of the same media outlets that totally abandoned or condemned whistleblowers such as Assange, Manning, and Snowden. Biden’s Justice Department recently coerced former intelligence analyst Daniel Hale into pleading guilty to “retention and transmission of national security information.” Hale leaked documents to a journalist in 2014 and 2015, revealing that nearly “90 percent of the people killed in airstrikes [of Obama’s drone assassination program] were not the intended targets” and included many innocent civilians. Hale continues to face charges of Espionage Act violations. Perhaps because most of the media continues to revere former President Obama, Hale’s case has received minimal coverage.

In his 1971 opinion on the Pentagon Papers case, Justice Hugo Black declared that a free press has “the duty to prevent any part of the government from deceiving the people and sending them off to distant lands to die of foreign fevers and foreign shot and shell.” Unfortunately, much of the media nowadays prefer to trumpet official lies instead of fighting them. It would be criminally naive to trust media outlets that championed Biden’s candidacy last year to police his presidency—especially when it comes to any wars or bombing campaigns he launches.