Origin of the Specie 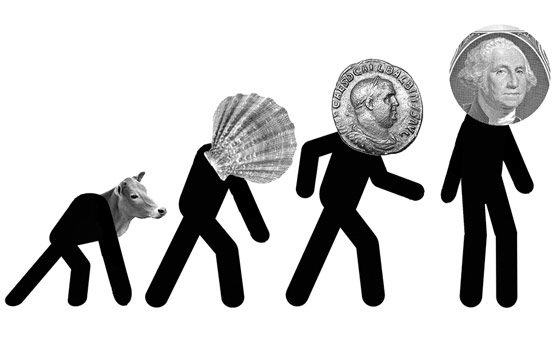 This book is just as audacious as its title suggests: Graeber, an anthropologist, walks the reader through the history of debt. How seriously does the author take his task? Consider: he devotes the 38 pages of Chapter 5 to constructing “A Brief Treatise on the Moral Grounds of Economic Relations.” Inasmuch as Graeber takes aim at the economist’s standard account of the origin of money, his book presents a formidable challenge. Yet on close examination, Graeber’s ambitious and scathing assault largely misses the mark.

I do not have many kind things to say about Graeber’s book, but my objections are focused on his critique of economists and their explanation for the emergence of money. In general, Graeber is an original thinker as well as an entertaining writer, enough to make the reader actually consider picking up a 500-page book on debt.

For the layman, let me summarize the standard account of the origin of money as Carl Menger, founder of the Austrian School of economics, elaborated it.

Menger claimed that a wise king or council of experts could not have invented money, for two reasons. First, it would take quite an imagination to conceive of money if someone hadn’t already experienced it. Second, even if a group of people could be convinced to begin arbitrarily using some item as money, they would have no idea of its purchasing power—in the beginning, sellers wouldn’t know how many units of the new money to ask for because they would have no frame of reference.

Menger neatly sidestepped these theoretical roadblocks by explaining the emergence of money as a spontaneous order. Initially, Menger reasoned, people must have traded goods directly against each other in barter. Yet there was a huge difficulty here in finding a “double coincidence of wants,” to use the terminology of later economsits. Without money, if a dentist wanted a ham sandwich he’d have to find a butcher with a toothache.

Because of these problems, Menger suggested that people going to market with relatively illiquid (i.e., unmarketable) goods would be willing to sell their items for goods that were moreliquid, even if the traders didn’t really have a direct use for those goods. For example, someone trying to sell a telescope in exchange for eggs might be wiling to trade the telescope for a horse. This is because the trader would be more likely to find a farmer selling eggs who wanted a horse, rather than a farmer with eggs who wanted a telescope.

Once people began accepting some goods as “media of exchange” the process snowballed, with the initially marketable goods seeing their marketability enhanced further still. Ultimately, Menger concluded, one or more goods became so marketable that virtually everyone in the community was willing to sell his wares in exchange for them. At that point, money had emerged from the market, even though nobody had set out to invent it.

The market’s choice of gold and silver made perfect sense in light of Menger’s account. Because of their properties—durability, homogeneity across units, ease of divisibility, convenient market value per unit weight, etc.—these two metals were ideally equipped to win the race to the top of marketability rankings.

Graeber does a good job quoting from several economics texts to establish the consensus view, with variations, of the above story. But beyond his rejection of the implicit moral conclusions that economists draw from their fables, Graeber levels an even more damning historical objection:

The problem is there’s no evidence that it ever happened, and an enormous amount of evidence suggesting that it did not.

For centuries now, explorers have been trying to find this fabled land of barter—none with success. Adam Smith set his story in aboriginal North America. … But … Lewis Henry Morgan’s descriptions of the Six Nations of the Iroquois … made clear that the main economic institutions among the Iroquois nations were longhouses where most goods were stockpiled and then allocated by women’s councils, and no one ever traded arrowheads for slabs of meat … . to this day, no one has been able to locate a part of the world where the ordinary mode of economic transaction between neighbors takes the form of ‘I’ll give you twenty chickens for that cow.’

This critique is simultaneously frivolous and powerful, though Graeber himself doesn’t seem to grasp the nuances involved. On the one hand, it is silly to object that no one has ever discovered a full-blown economy operating on the principles of barter. The whole point of the standard economist story is that such an economy would be plagued by difficulties in reaping gains from trade and so would quickly spawn media of exchange and eventually money. In fact, if missionaries or conquistadors ever had found a stable society that had been using pure barter for generations, then that would have constituted the real problem for the Mengerian theory.

Graeber is simply wrong when he leads the reader to believe that the economist story is pure fiction. We have a documented case study: the famous emergence of cigarettes as money as described in R.A. Radford’s classic 1945 paper, “The Economic Organization of a P.O.W. Camp.” To adopt Graeber’s approach, modern archeologists might explore the ruins of these camps and uncover chalkboards listing prices for various items in Red Cross ration packages denominated in cigarettes. Yet the archeologists might have no record of prisoners initially trading the goods directly against each other (since that practice was very short-lived). Hence, they would conclude that the prisoners on day one of their capture must have known to use cigarettes as money rather than the currencies of their homelands.

Although Graeber’s critique therefore misses the mark in one obvious respect, nonetheless he doesseriously challenge the standard Mengerian account, in a way I’m embarrassed to say that I had never even considered when teaching the fable to my own students. Specifically, Graeber points out that barter spot transactions would really only be necessary between strangers who might not see each other again. In contrast, neighbors could engage in credit transactions even before the use of money had developed. For example, if one farmer had eggs to sell, while his neighbor didn’t have anything he wanted at the time, then the first farmer could simply give them to his neighbor, saying, “You owe me.”

Graeber is a smart fellow, and he recognizes that his identification of a loophole in the standard economist account doesn’t seal his victory. He writes:

There is just one major conceptual problem here—one the attentive reader might have noticed. Henry ‘owes [his neighbor] Joshua one.’ One what? How do you quantify a favor? On what basis do you say that this many potatoes, or this big a pig, seems more or less equivalent to a pair of shoes? Because even if these things remain rough-and-ready approximations, there must be some way to establish that X is roughly equivalent to Y, or slightly worse or slightly better. Doesn’t this imply that something like money, at least in the sense of a unit of accounts … already has to exist?

This is the central question, and Graeber’s case rests upon it. Menger and other economists can overcome this hurdle; yet reading the rest of Graeber’s chapters on this issue, I have to conclude that his approach cannot. I still do not see how people could possibly have amalgamated these various debt records—of heterogeneous goods owed by this person to that—into a common denominator without the antecedent use of barter exchanges to establish the relative valuation of the different goods.

After raising the theoretical problem but not adequately solving it, Graeber describes the economy of the ancient Sumerians:

The basic monetary unit was the silver shekel. One shekel’s weight in silver was established as the equivalent of one gur, or bushel of barley. A shekel was subdivided into 60 minas, corresponding to one portion of barley … and Temple workers received two rations of barley every day. It’s easy to see that ‘money’ in this sense is in no way the product of commercial transactions. It was actually created by bureaucrats in order to keep track of resources and move things back and forth between departments.

Of all the thousands of goods they could have chosen—or they could have simply invented some arbitrary accounting unit, since there was allegedly no relation to commerce—the Temple bureaucrats happened to choose the very commodity that in the modern market serves as money, clearly for the reasons that Menger and others cite. This is an astounding coincidence. Because the historical evidence shows Temple bureaucrats relying on an accounting system based on silver, Graeber concludes that the bureaucrats chose to designatesilver as the money.

Graeber unwittingly makes even more concessions to the Mengerian account when he later writes: “In the marketplaces that cropped up in Mesopotamian cities, prices were also calculated in silver, and the prices of commodities that weren’t entirely controlled by the Temples and Palaces would tend to fluctuate according to supply and demand.” So what the historical record actually shows us is a Sumerian economy in which merchants used silver in actual spot transactions when trading in the outside marketplace and Temple authorities kept track of internal bookkeeping operations through the use of silver valuations. And Graeber thinks it so self-evident that the causality ran from the Temple bureaucrats to the merchants that he actually says of the Mengerian account, “rarely has an historical theory been so absolutely and systematically refuted”!

David Graeber’s magisterial work on the history of debt offers a wealth of anthropological detail that would supplement any economist’s understanding. Yet despite his confident assertions to the contrary, Graeber hasn’t refuted the standard account of the origin of money. The historical evidence he provides is consistent with the logic of Menger’s explanation, and Graeber has no rival approach that explains the phenomenon better.

Robert P. Murphy is the author of The Politically Incorrect Guide to the Great Depression and the New Deal.